In the 1920’s my maternal grandfather on a borrowed motorcycle raced Speedway at the Maitland Showground. His successes on the dirt track saw him raise the £7 he needed to buy his first motorcycle. I still have his racing license! Jumping forward to the 1960’s I have very early memories of sitting on the tank of one of his motorcycles “steering it” as “we” rode around Newcastle and the mixed feelings of freedom, excitement and joy sharing that with him brought to me. My 2015 IBA Memorial Ride was ridden in memory of William “Bill” Stanley Atkinson, Pop to me.

Today’s ride was to be a little different. The plan was a minimum margin over the 1610kms to qualify it as an Iron Butt Ride but the route included some of the best motorcycling roads NSW has to offer.  Corners, corners and more corners that Google Maps suggested might take over 20 hours. A summary – Thunderbolts Way, W/E on the Oxley, E/W on the Oxley, Waterfall Way in two parts, Ebor-Grafton. Guyra-Ebor, the Gwydir Hwy and a transport leg home. The bike for today, the Super Tenere on a pair of Heidenau K60’s!

I left 15 minutes late with a docket from the local servo at 4.45am. The plan was to ride the Pacific Hwy and Bucketts Way in the dark but hit Thunderbolts Way with the sun to my right.  It was a beautiful sunrise with some cool fog patches around. 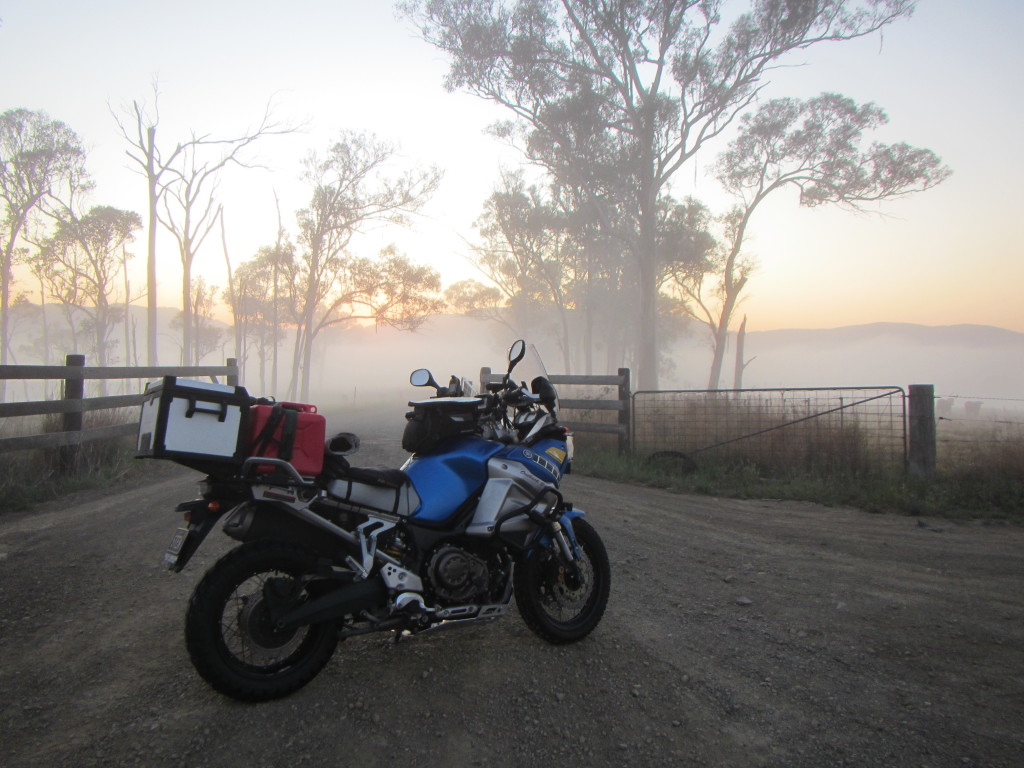 And of course it’s not one of my Iron Butt Rides without at least one of these, taken just before Gloucester. 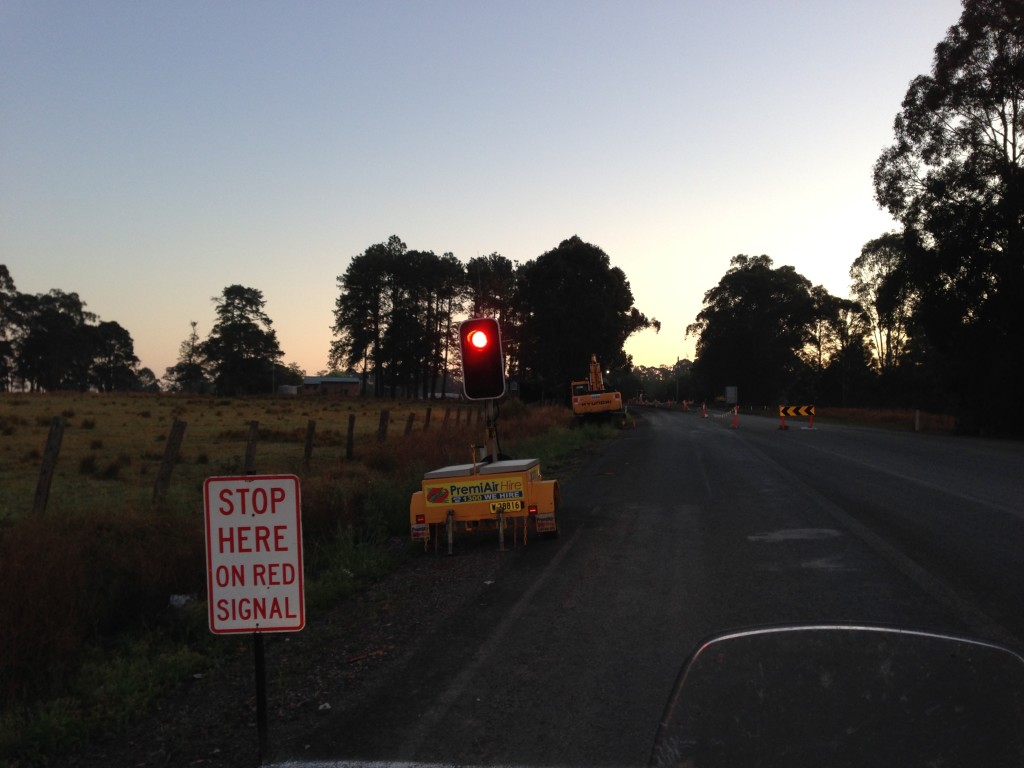 The road on the Barrington end of Thunderbolts Way was in much better shape than the last time I was there, much of the roadwork has been complete. It’s really a fantastic place to be in the morning with no traffic about with only one car seen between Barrington and Carsons (The Love Dunny) Lookout. 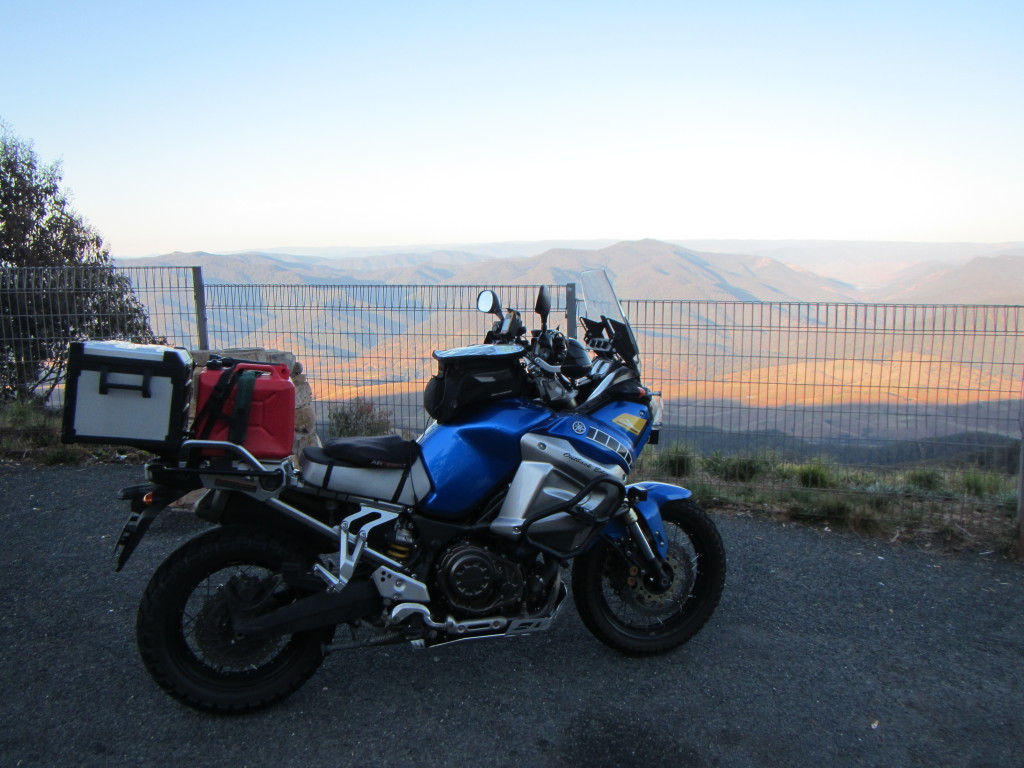 I tore myself away from the early morning view and high-tailed it to the Royal Cafe at Walcha for a Hot Choccie and a chat with Toni, one of the owners, who loves to talk bikes.  She asked me where I’d come from, paused and said “Doing an Iron Butt Ride are you? So you’ll need a receipt? I won’t charge you the credit card fee.” as she topped up the milk in my drink for the second time.

While there I emptied most of the jerry’s into the tank, the ride was about to get a little serious so I wanted the weight where it was supposed to be.  It was still relatively early but by the time I hit the business end of the Oxley the road was mostly dry, awesome! I spent the west east run down the mountain taking notes (wet patches, road kill etc) and dialling in my cornering skills. I was going to need them today.  Fortunately, it wasn’t too ugly but it was very hard not to take some time to enjoy the early morning views on the way down.

To get the Iron Butt distance up I needed to ride through Wauchope to the Donut BP where I filled the tank while hoping the lines of westbound traffic weren’t heading up the mountains. Thankfully they weren’t and I was in for an exhilarating almost completely clear run back up the hill. Two cars and one motorcycle dispatched safely along the way. Appropriate sparks off the pegs on the Gingers Creek corner and I was still smiling ear to ear as the adrenaline faded while heading into the Yarrowitch Valley for the second time that morning.

I rode back through Walcha, Uralla, fuelled up near Armidale Airport and turned right onto Waterfall Way towards Ebor. At the time I was 15 minutes or so behind my ambitious schedule of a 90kph OA. I have never ridden Armidale Road (Ebor-Grafton) before, I was thinking I might pick up a bit of time on that leg and it was looking OK too until I hit a huge section of mad, mad corners on quite dodgy tar.. Woo HOO!

I was very glad I was on the Super Tenere, the suspension dealt marvellously with the road surface while I focussed on keeping my boots and the pegs off the road, at the same time trying not to. The practice on the Oxley was kicking in and the edges of the 50/50 on road/off road Heidenaus were getting a real hiding. Fortunately I didn’t see any of the cows on the road the signs suggested might be there.  I had to stop at Nymboidia briefly to have a drink from the Camelbak and catch my breath. This is definitely a ride again road for me.

After topping up the tank at Grafton I headed west on another road I’d never ridden before, the Gwydir Hwy.  All I knew about the road was that it went to Glenn Innes.  What I didn’t know about was the road up the Gibraltar Range and the almost racetrack quality road surface. I did make up some time on this leg of the ride despite stopping a couple of times to take a few deep breaths and a photo.. 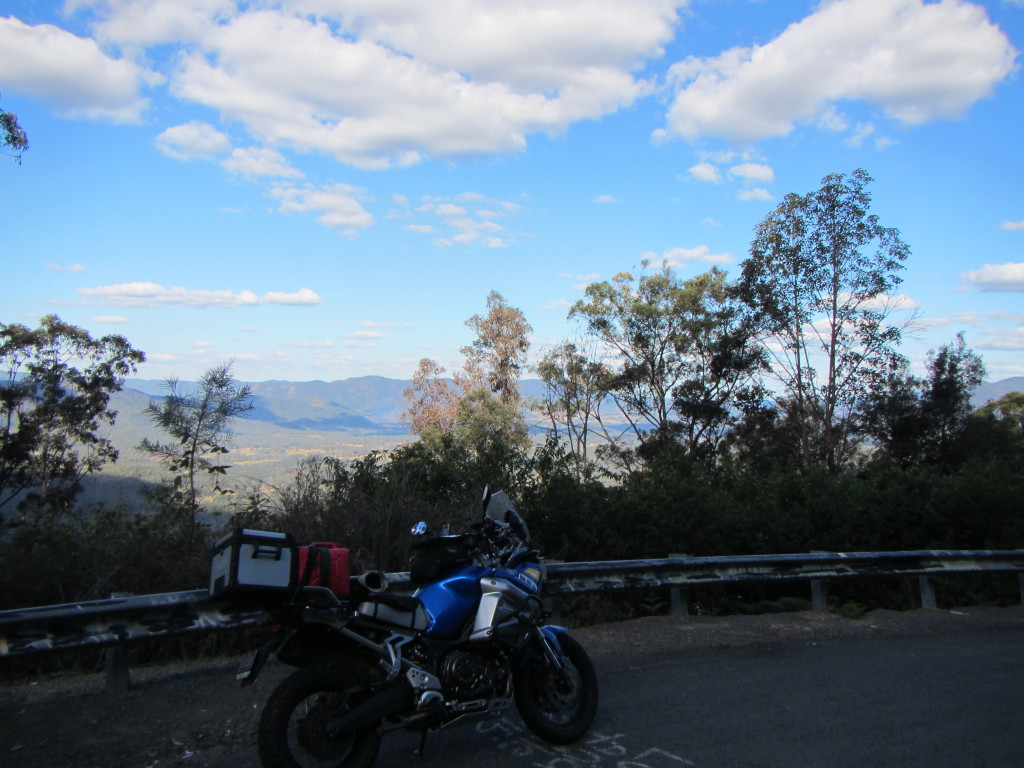 or two of the amazing views. 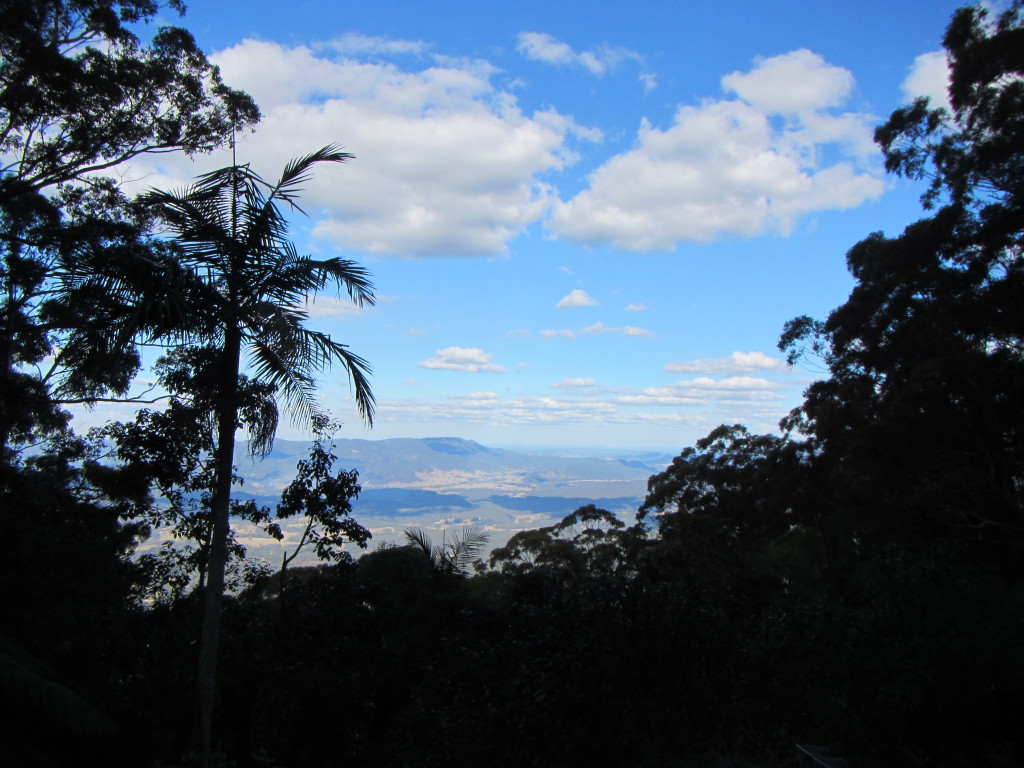 I turned south at Glenn Innes onto the New England Hwy.  Before leaving town though I did a quick about turn to grab a photo of a steakhouse that my wife and I had dinner in before we were married.  It was a memorable night for a number of reasons but it’s sufficient to say that we arrived in Glenn Innes on my ST1100 on the way home from a trip to Queensland. We later named our first male Great Dane pup after a prize bull whose skin might have been on the floor of the bar. 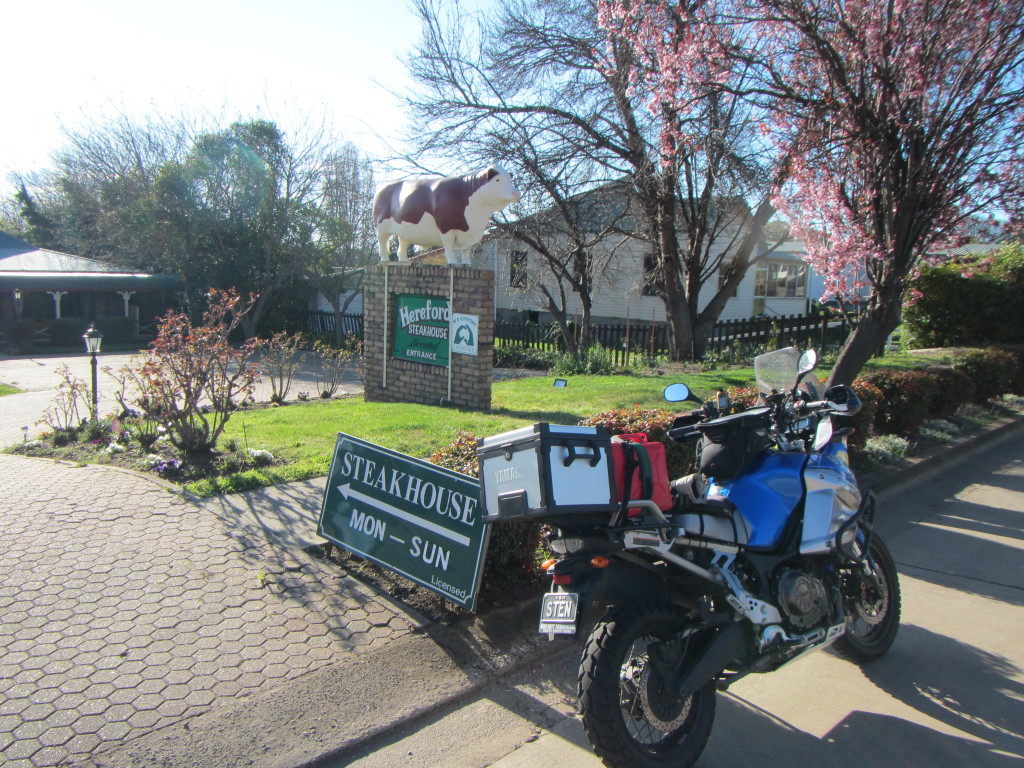 I digress… The ride to Guyra on the Highway was a nice breather and I arrived 3 minutes ahead of schedule. While I was there OzStoc legends ST2UP, Pockey and their son turned up to say G’day.  We had a nice chat, Chris is full of local knowledge about the roads I’ve been on and the last of my “firsts” for today, the Guyra-Ebor Road which is now all tar.

Wattle trees in flower abounded in the closed in portions of this stretch which was relatively mild in terms of corners but, dare I say it again, incredibly scenic. See…. 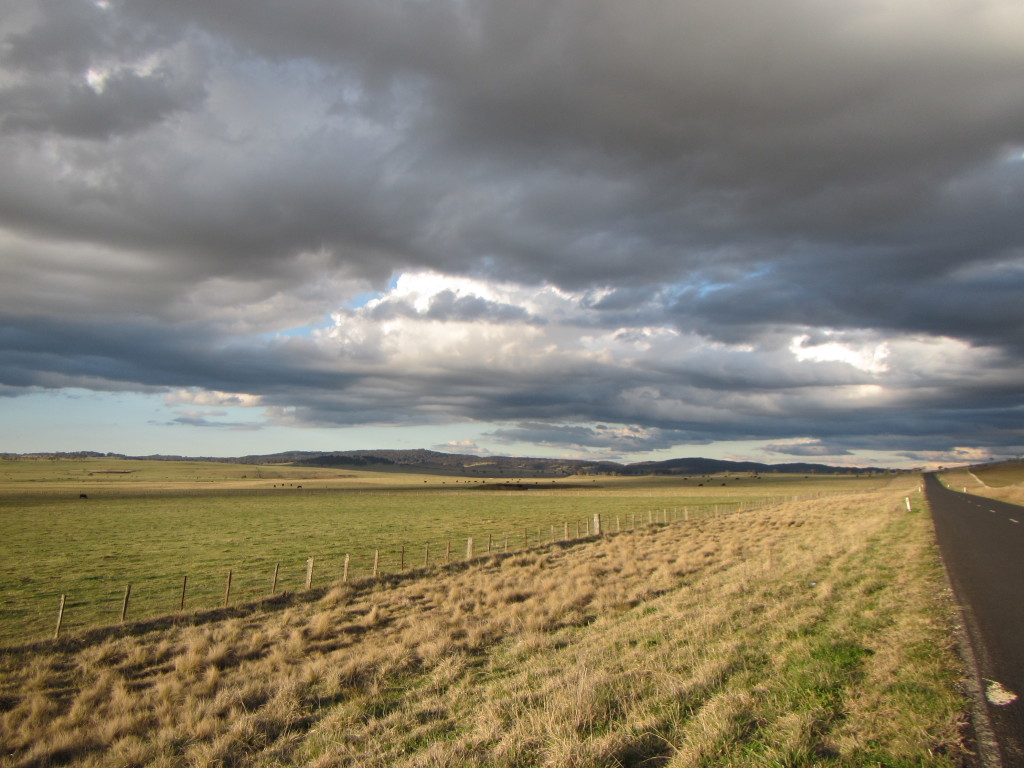 I was a bit concerned about the low, building clouds off in the distance but fortunately they came to nothing. However I did ride through them when back on the Waterfall Way between Ebor and Dorrigo as the sun went down behind me. Riding in the clouds is cool!

At the top of the “fun and games” downhill slalom east of Dorrigo I was met by another red roadwork light (no pic, sorry) and a line of traffic. This was GOLD. I rode past the cars, put myself at the front and readied myself for a darktime, car clear dash down the hill.  I rode through Bellingen (I think there might have been a fire at the Hemp shop, always smells odd there) and punched out onto the Pacific Hwy at Raleigh for the transport leg home.

The roadworks and 80kph zones in that area of the Pacific Hwy are a pain but frankly I was starting to feel a bit beaten up and was happy to kick back and mosey along. I stopped for more fuel and a docket at Urunga North, adding a splash to one of the jerry’s in case I needed to top up between here and home.  My next planned stop was for a meal, a quick call home and a brain reset at the Macas at the Donut at Port Macquarie. A few times I’ve filled from the jerry outside the McDonalds so I didn’t have to double shuffle the bike around there.  It just saves time.

Then with freeway most of the way home the last leg was uneventful and cruisy. My body was, in a number of ways, letting me know that while today was one of the most fun day’s riding I’ve ever done, it was also physically and mentally fatiguing. Yep, I’m a wuss.

I arrived back at the local servo and secured a Cherry Ripe. I was about 20 minutes behind schedule but about an hour forty-five short of Google’s estimate.

Here’s a map of the route 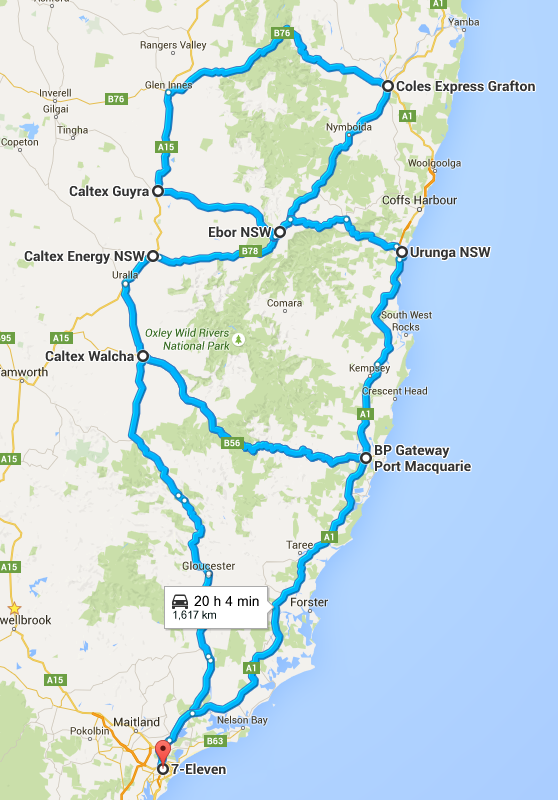 There you go Pop.  That one was for you.