Skidoo, a bit of a lunatic even in normal Iron Butt terms, had a brilliant idea to do a new 50CC (50 hours Coast to Coast) from Cooktown in Queensland to Warnambool in Victoria.  Apparently these points go to two oceans that otherwise aren’t joined.  I had been enjoying watching this ride unfold, completely aware of how difficult it is to keep IBA pace in Queensland with their crappy roads that cows like to lay down on, abundant hoppies and snufflers, low speed limits and never ending roadworks.  Enough background but suffice to say that I was in the mood for a bit of a ride and decided to tag along for a while, with his consent of course.

So up at 2.30am for breakfast, some paperwork, fired up the KTM1290 Super Adventure and I was getting my start docket the the Shell at Wallsend at 3.22am.  The intial part was a transport leg to Tamworth where I fuelled up. 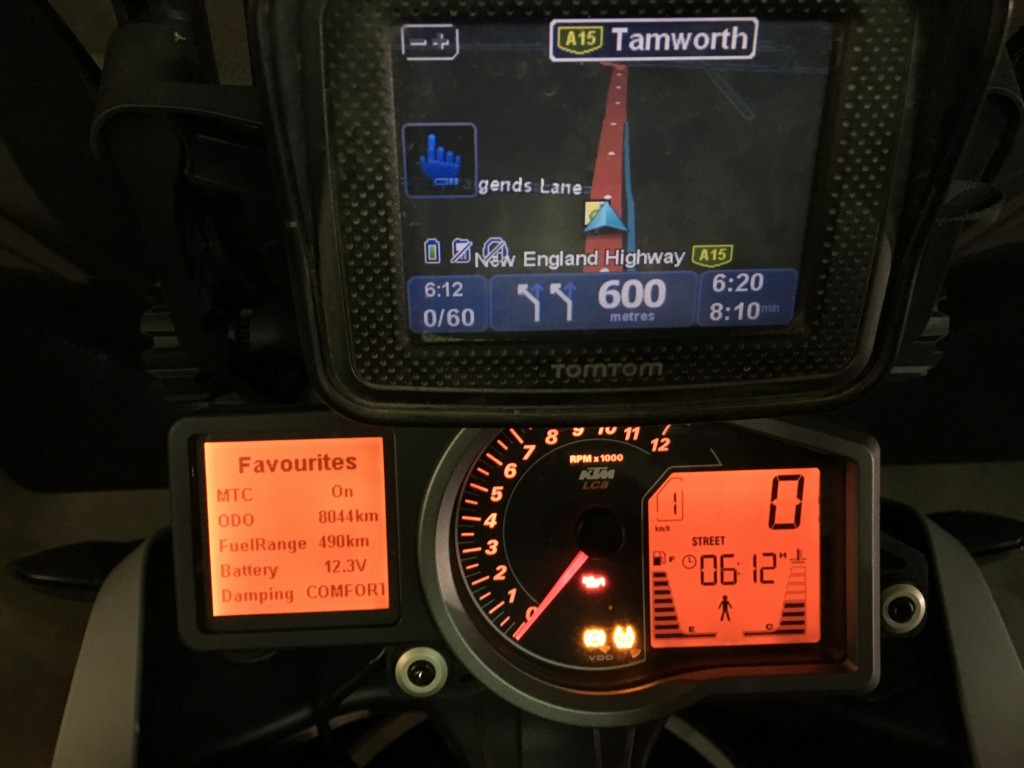 and went to the agreed meeting place, Macas on the northern side of town about 6.15am.  I just had time to order and collect a B&E McMuffin and flat white when Skidoo rolled in with Chris, Ozstoc legend and new IBA rider after having recently conquered his first SS1600k.  Chris had ridden with Skidoo for a couple of hours, as you do while the sun’s down.  Skidoo was ahead of schedule so they ordered some food, I ate mine, we had a chat, took a pic. 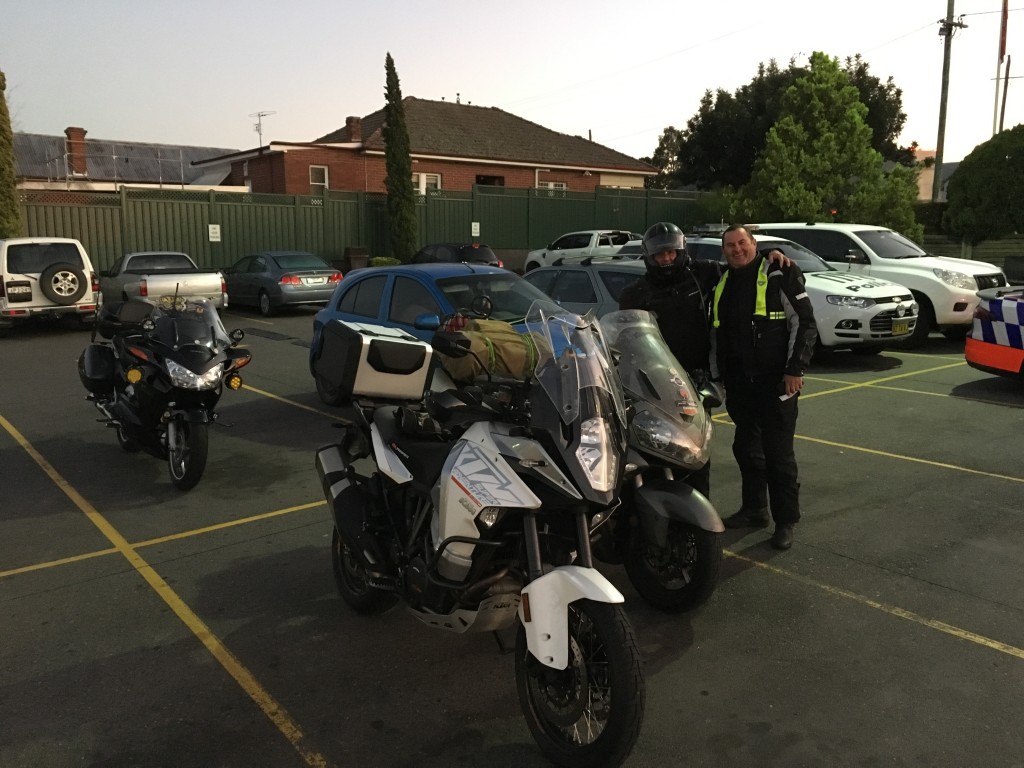 Chris handed Skidoo over and went home and we headed towards Gunnedah. Skidoo set the pace, it was his ride so I wanted to see what he was comfortable with.  It’s sort of a negotiation thing until the two riders settle into a rhythm that suits both. After I while I took the lead, set the cruise and enjoyed the sun rising behind us.  We went through Gunnedah down towards Coonabarrabran the Gilgandra really enjoying the scenery the Warrambungle area has to offer.  The morning was mild, perfect riding weather really.  A bit better than when I was out this way a few days ago.

First stop for fuel was Dubbo where Skidoo also handed some gear to his missus, said g’day to her and then goodbye.  She’s a patient one! 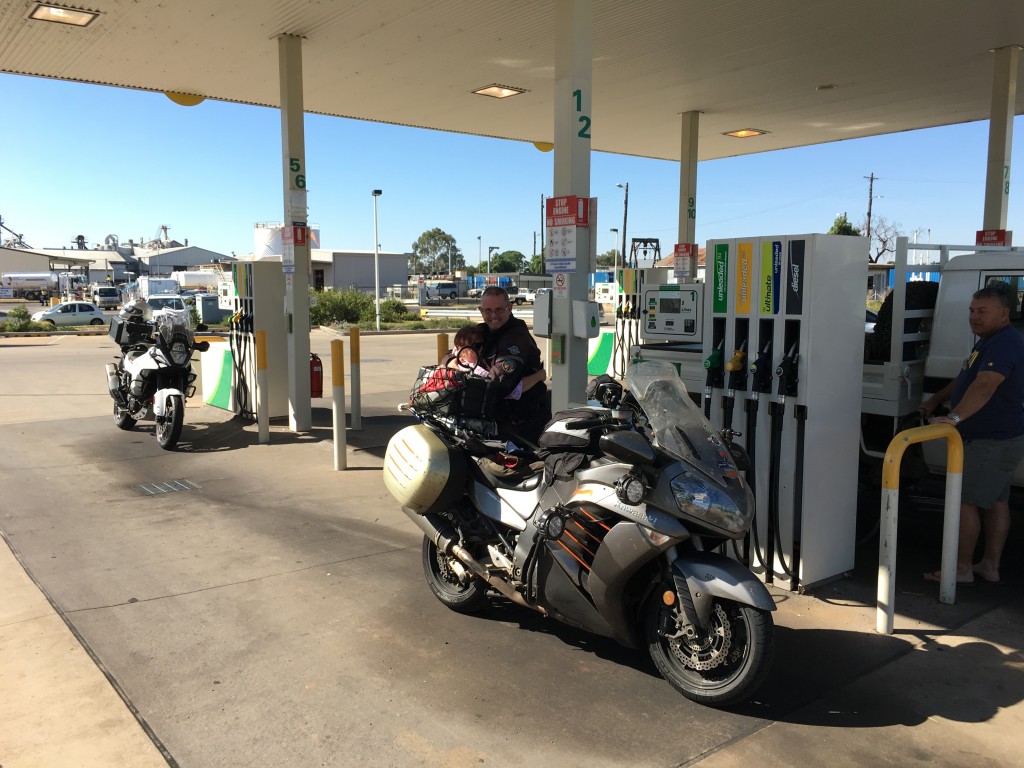 Skidoo led us out of Dubbo and when things opened up I tool the front position.  Parkes, Forbes and the little towns in between were dispensed with as the day progressively got warmer.  There were some fires about and riding through smoke and embers causes some breath holding and discomfort, I hate smoke, but it was intermittent and what can you do? Karl grabbed a snap of some of it. 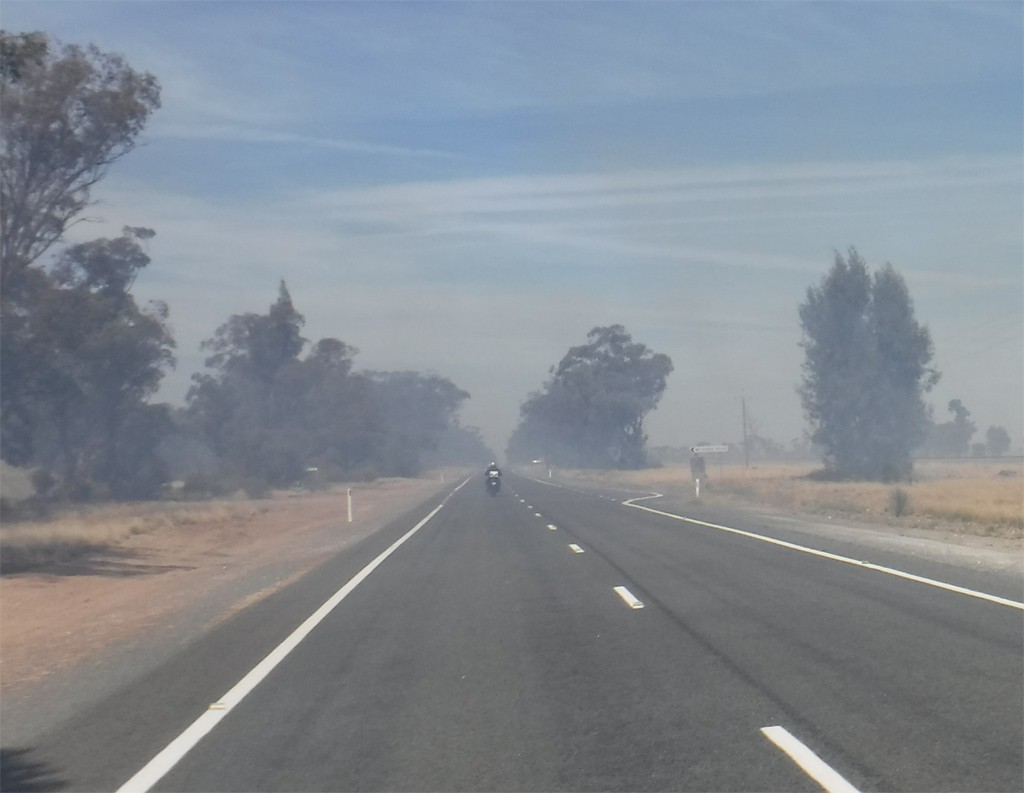 It’s probably worth mentioning that doing these rides with company helps with fatigue. Skidoo and I have ridden together one other long rides, usually taking turns in front.  Riding in front and having to worry about changing speed limits, routing, cameras, obstacles and appropriate overtaking opportunities is more fatiguing than sitting behind someone and doing what they do.  Assuming you trust the person in front that is.  Today was a short day for me so taking the lead was allowing Skidoo to kick back and enjoy the ride and to stay as good a shape as possible.  It’s all about safety.

It’s a long way to Wyalong from Dubbo, Karl likes to take pics along the way and got me to ride past. The KTM really is a sexy bike. 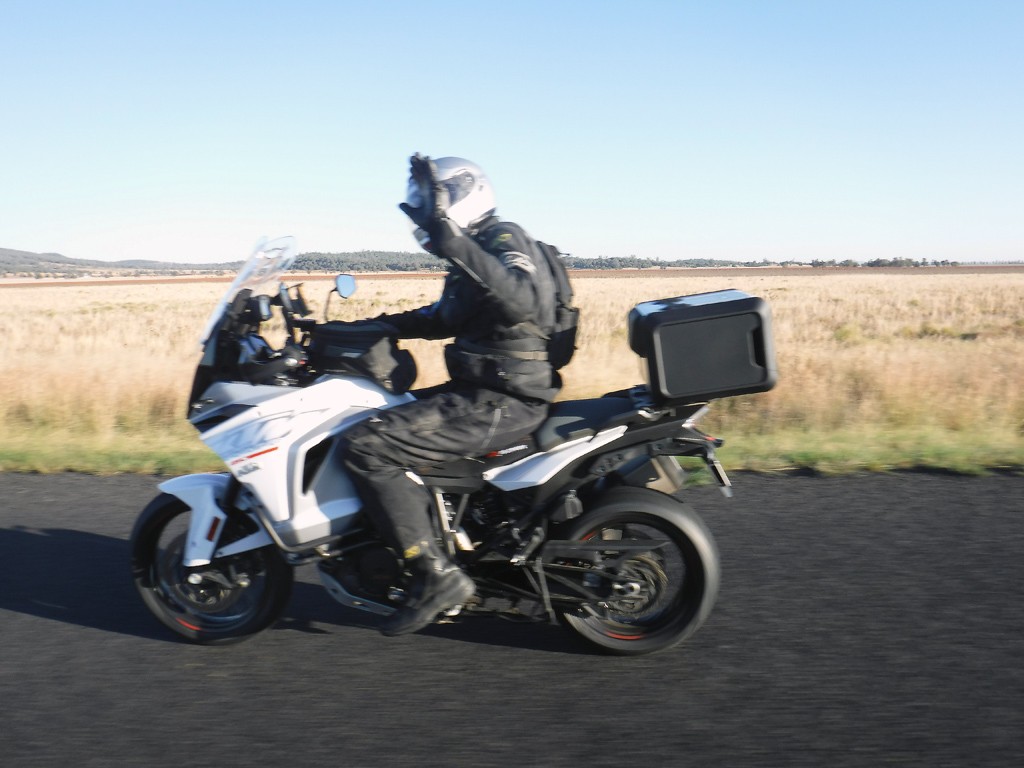 A quick stop at Wyalong for Skidoo to shed some layers and top up his Camelback gave me time to stretch the legs and have some Gatorade.  Here he is waiting for me to get on the bike and get going. 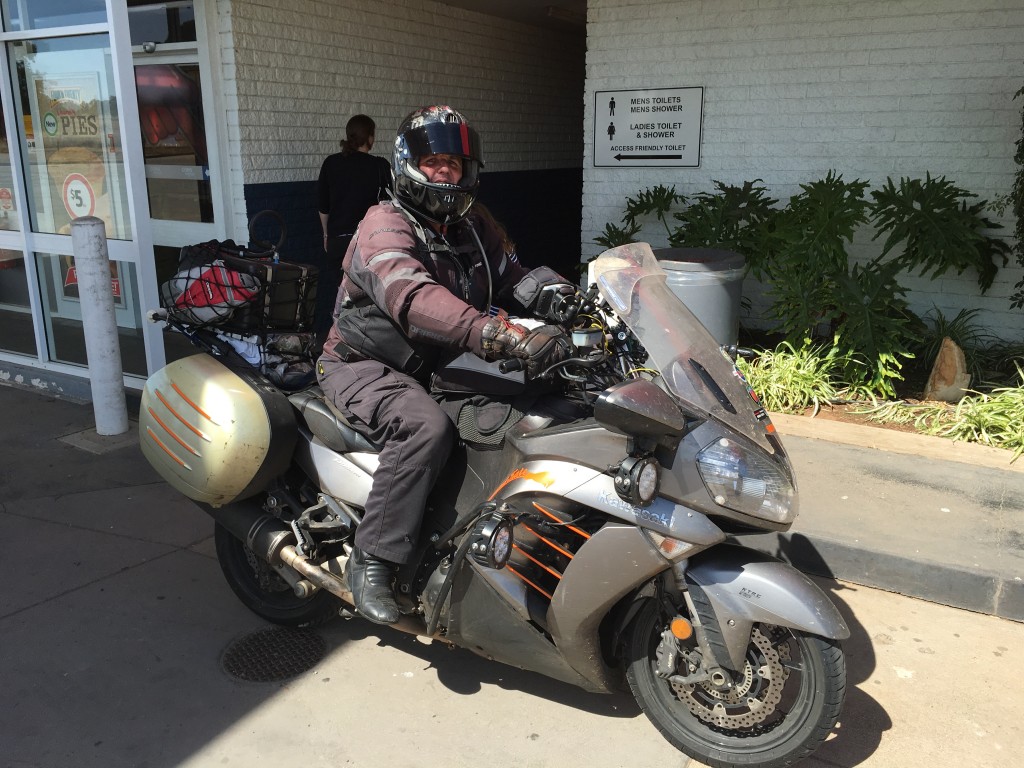 We weren’t in a rush but weren’t stopping much so the overall average speed we were making was right on target for Skidoo’s long ride.  I led us left towards Temora and of course this has to happen somewhere. 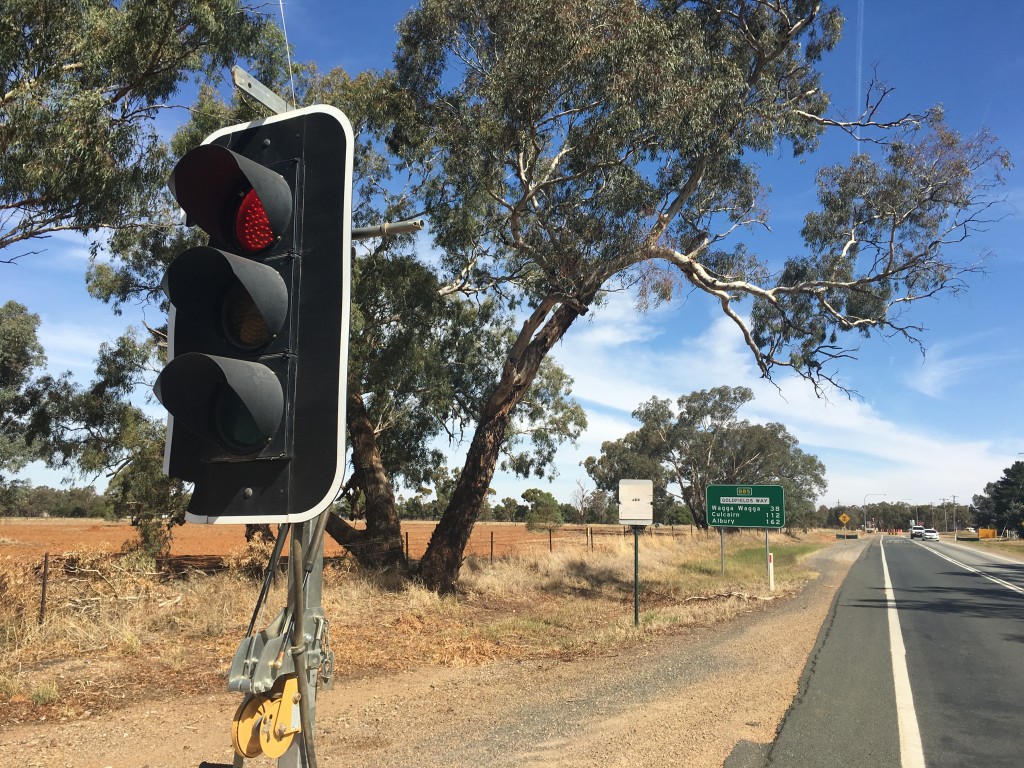 We rode down to Wagga Wagga where we fuelled up again. The range on the KTM 1290 Super Adventure is amazing with this sort of riding. 500kms to tank is relatively easy, at Wagga Wagga it was telling me I had 170kms range left after having ridden 414kms.  The range it shows can be a bit confusing because it updates intermittently so to work out exactly what it had left I would have had to keep an eye out for the next update.  It also almost by default tells you it has 490kms range whenever you fill it up but that stays there quite some time.  A bit idiosyncratic in this regard is the KTM.

I had originally planned to go further south to Albury and either head back to Newcastle or keep on to Warnambool. I’d done plans for both and they were each over 1610ks, the minimum IBA distance.  However one thing led to another and I decided to head out to the Hume and back north.  Karl was travelling fine and was talking about having a break at Albury, not too far down the road.  I knew that some Victorian FarRiders were meeting him further south so he wasn’t going to be short of company for the rest of the trip.  I wasn’t sure if heading home at this stage would give me enough distance but that was something I could worry about later if I felt the need to add another ride to the certification list.

Once on the Hume I kicked back, set the cruise by the GPS speed and thought about where I might need to stop.  It was 600k’s so only one stop would be required. However I realised that the KTM had never been to the Dog on the Tuckerbox at Gundagai so I had to call in and fix that. 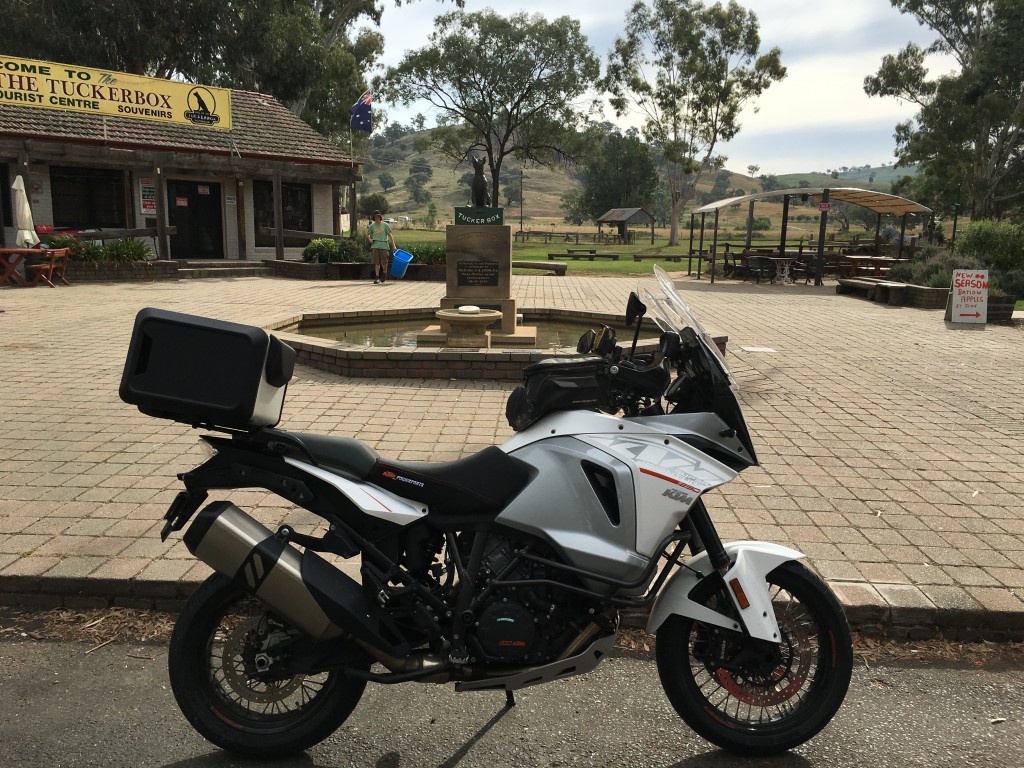 Yesterday, at the KTM dealership in Newcastle, I had a pair of Michelin PR4 Trails put on the Super Adventure and also picked up a PowerParts Ergo Seat. I left this morning with the Airhawk in the top box figuring I’d try the seat out.  In terms of the seating position it was much better than the OEM (but not heated of course).  However after 1200k’s things in derriereland were troubled.

So the stop was at the BP at Marulan where Darven served me, interesting dude.  I grabbed a coffee, burger and got set for riding in the dark as well as putting the Airhawk on the seat. A bit late really, it offered some relief but the damage was done.  Acknowledging that there were only 320kms or so to go didn’t help. Sometimes I feel like a complete amateur!  I’m sticking with the seat though, 1200ks is way more than I can sit on the OEM and the slightly higher and flatter profile is awesome.

The sun exited left and the darktime brought out all the people in a hurry to get to Sydney on a Friday night so some extra care was needed dodging people who don’t look in their mirrors.  Soon enough I was on the M7, the M2 and to Pennant Hills Road where I thought briefly about stopping at the Thornleigh Golden Arches but a sip from the camelback put that out of my mind and I rode on through.

Because I’m too lazy to turn the backlight on, in the dark I couldn’t see the screen of the Etrex that had been dutifully recording the ride stats including the total distance ridden since leaving Wallsend this morning.  I pulled into the local servo and had a big helmet laugh when I saw it under lights, 1618kms and enough for the IBA to consider.  I new the documentation was right, I had no idea what Google Maps would say about the distance (turned out to be 1616k’s) and the Odo was 1664kms.  The thing that really made me happy is that bumping off the IBA ride distance meant I could treat myself to a twin-pack Cherry Ripe as a final docket and my exclusive reward for getting the job done.

So with Cherry Ripe in tankbag it was time to head home and I was there by 10pm. Skidoo finished his ride with hours to spare.  He’s one impressive rider and it was great to hang out on the road with him again.

Here’s a map of the route. 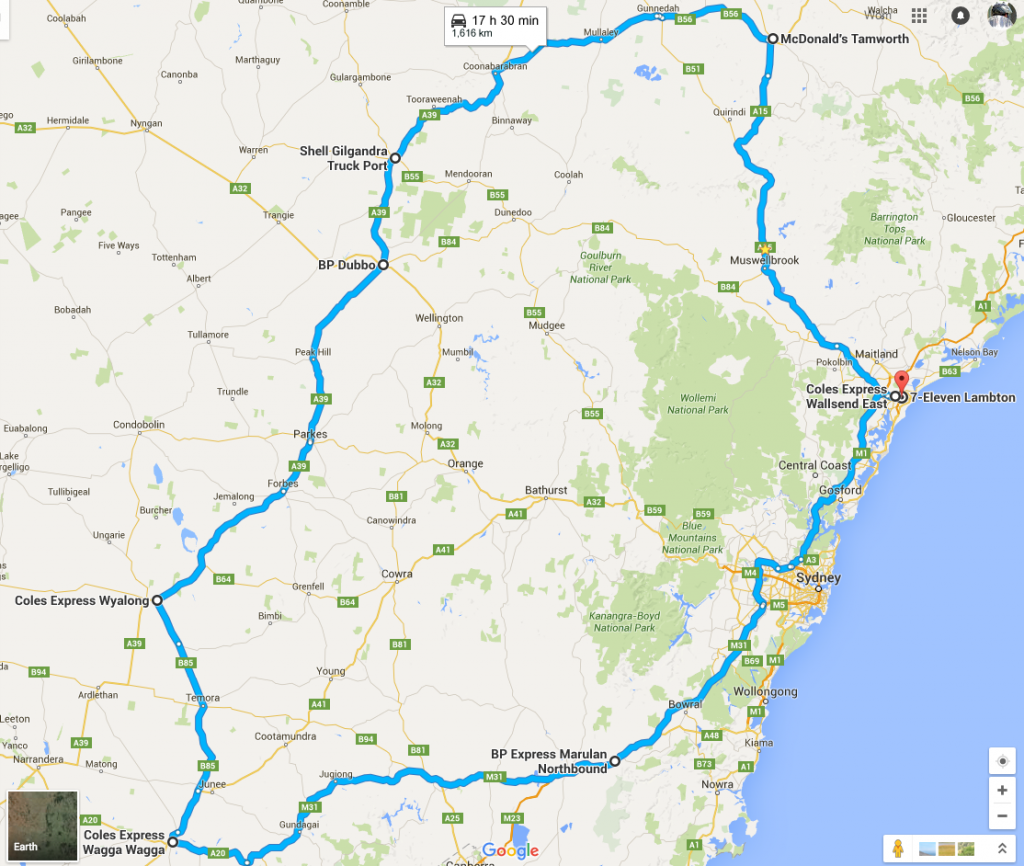