The Iron Butt Association Australia had it’s inaugural meeting in Parkes on 2 July 2016, called the Parkes Muster. Current Iron Butt Association members were invited to take part and a special IBA Certificate was on offer for anyone who completed an IBA ride ending on the day of the event at Parkes.  Most riders who attended took up the challenge despite the freezing mid-winter temperatures on offer.  I’ve just finished my ride – it was simple but quite cold.

I left Newcastle on Friday afternoon at 1:21pm on the KTM1290 Super Adventure and rode south 522kms to McDonalds at Gundagai South.  I refuelled at the Shell (18.25litres), had a McChicken and Flat White, got back on the bike and rode 522kms back to Newcastle. The KTM was just the bike for munching this 1000+k’s with only the one stop at the turn around. The 30 litre tank and great fuel economy made this the obvious choice of bike to just get this done. The temperature got down to 4.5 degrees both ways during the ride and with the 110kph wind chill it was cool enough.

I was back in Newcastle at 12:09am (docket time), rode home and went to bed. Overall average including the stop was a tad under 97kph which was a little slower than I expected mostly due to holiday traffic on the way down and a stop that was a little longer than usual at Gundagai.

The no nonsense first leg of the ride was about maximising sleep and I managed 4.5 hours.  It’s my preference not to sleep during a 1600km ride.  It just made sense this time not to ride between midnight and daylight particularly since heading west at night without auxiliary lighting presents a level of risk best avoided.  I got away about 5.35am and rode to Muswellbrook as the sun came up to get a docket. The docket was for a packet of Fisherman’s Friends just to prove the route and stop the nose running.  It was getting close to zero degrees.

From there through Denman, Merriwa and Dunedoo the temperature hovered between zero and 2.5 degrees for most of the time. The ice warning light comes on on the KTM at 4 degrees.  Seems a bit high.  I got to Gilgandra for fuel (the only time I’d need to fill today) and stopped for a while at the Shell Truckport for a coffee and bacon and egg roll. I took my time because I had an hour or so up my sleeve to arrive in Parkes prior to 1:21pm and the expiry of 24 hours since my start docket.

My route took me towards Dubbo but turning right Eumungerie.  I hadn’t ridden the Eumungerie Road to Narromine before, very scenic and lightly trafficked so with no time pressures I stopped for a photo. 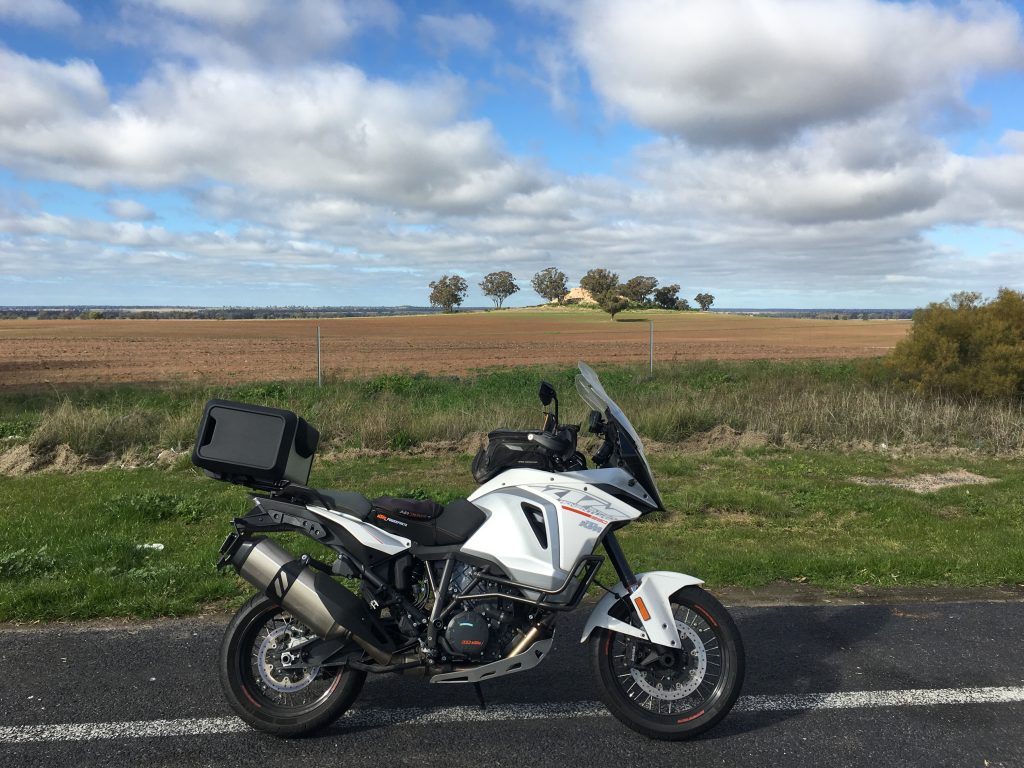 I needed a corner docket at Narromine to prove the route so the ANZ ATM obliged and I took a quick pic there too. 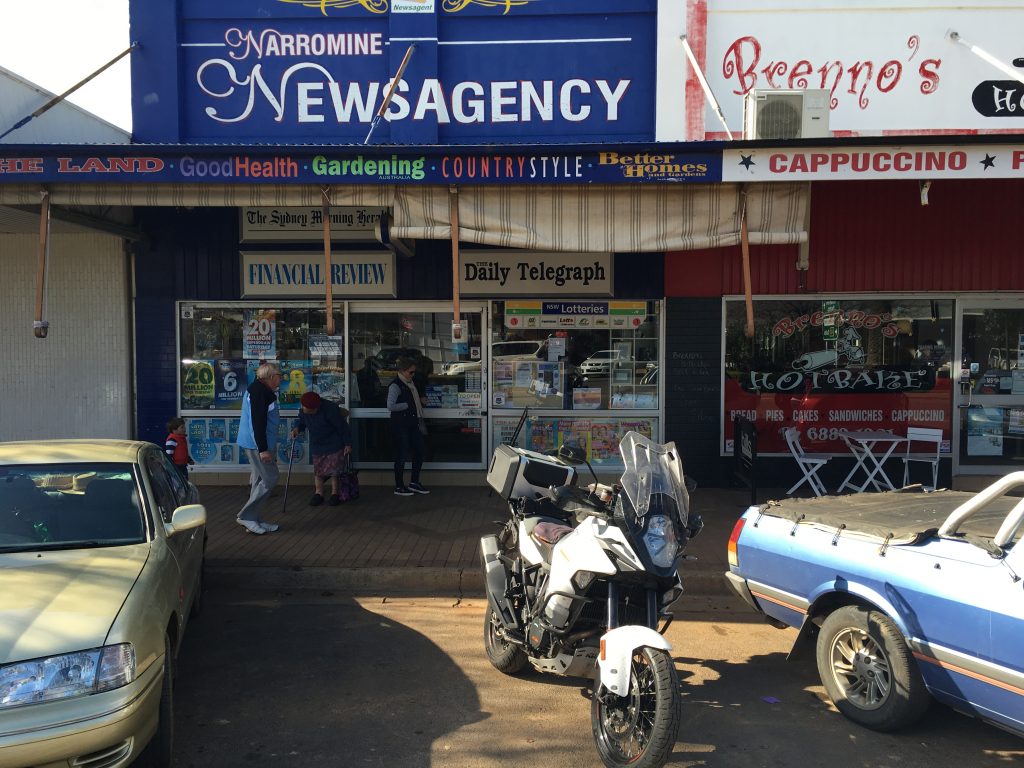 I was getting close to the end and was both concerned and elated that I hadn’t been stopped at any roadworks this trip.  Rare indeed but I’ve started to enjoy taking pics while stopped.  Fortunately (or not) only about 70kms from the end the eternal roadworks south of Tomingley delivered. 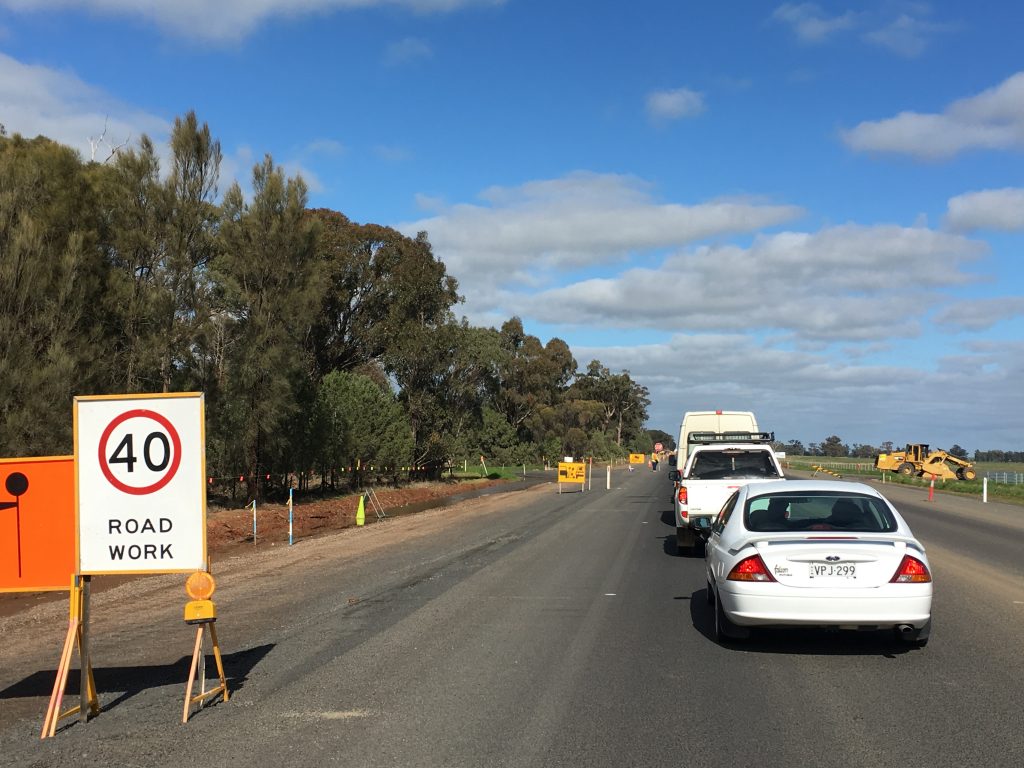 After taking this snap I rode up to the front of the queue for a chat with the lollypop man.  From there it was a short ride into Parkes where I grabbed a fuel docket at 12:25pm finishing the ride with just under an hour to spare.  From there it was a short trip to the Parkes Services Club where the IBA Australia was waiting to check my documentation for the ride.  All good!  Here’s the etrex with the stats. 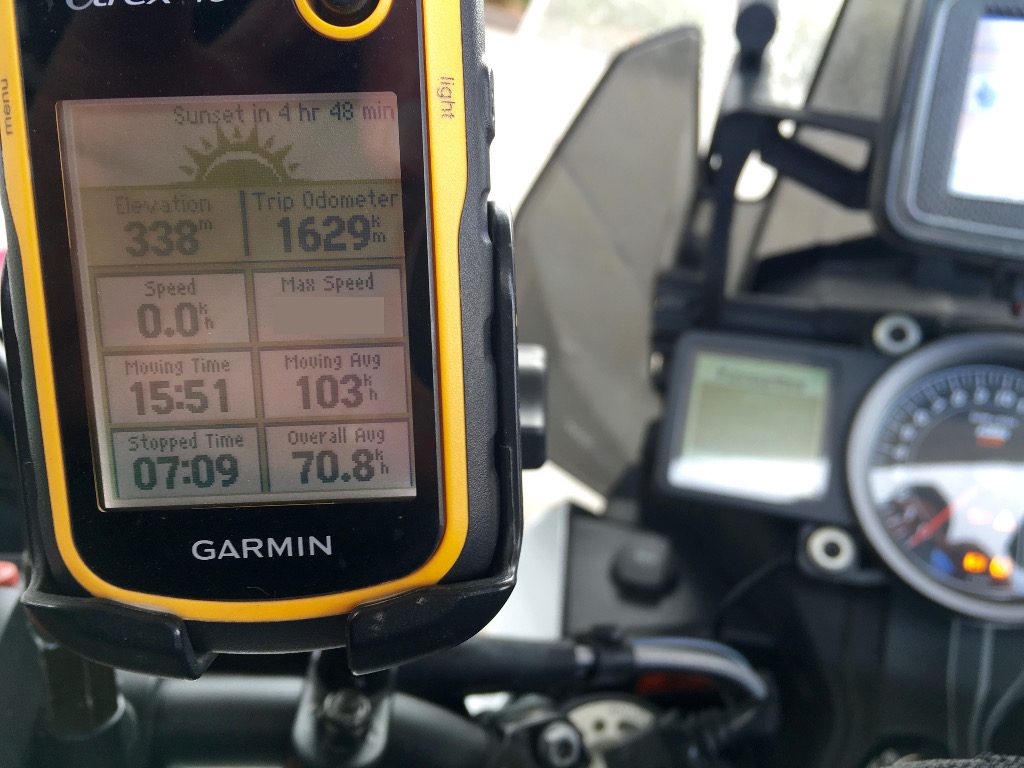 And here’s the SpotWalla Map of the ride 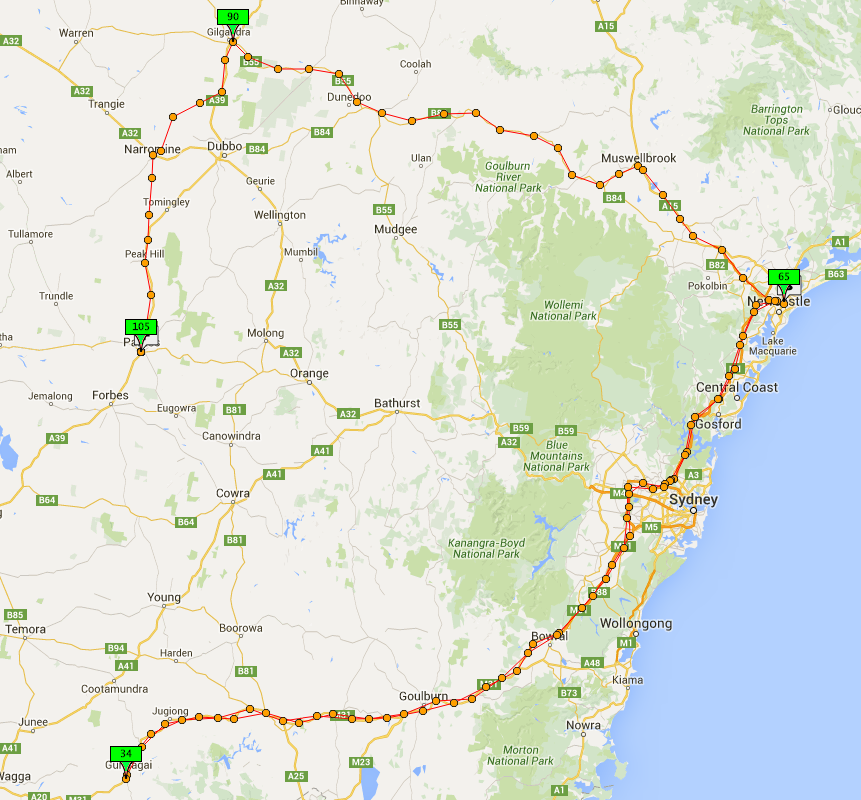