Today I was riding to the 2nd Annual IBA Australia Muster in Renmark.  It’s a must do event in the local Iron Butt rider calendar.  Naturally riders that attend will generally choose to ride an Iron Butt ride of some description to arrive on the day and collect the unique certification for the event.

I was originally to ride an SS1600k with Bill, Ox and Nevertire Nic from Newy through Broken Hill looping down through Burra SA and back through Morgan to Renmark. However while chatting with Rob one day he mentioned he was planning to ride dirt on the Cobb Highway from Wilcannia to Ivanhoe as part of his ride.  I was keen to do this as it would be a decent warm up and bike trial for a ride I’d been secretly planning that was to occur on Monday. Australia’s first IBA Dusty Butt.

So I met up with Bill, Ox and Nic at my start location at Wallsend at 4.30am and rode with them to Gilgandra. The morning was cool but comfortably so.  There was some thick fog around Jerry’s Plains – no surprises there.  As I approached Merriwa it became apparent I wasn’t going to make it to Gilgandra without adding fuel so I pulled in at the servo and topped up while they popped into the little public rooms just down the road.  There wasn’t much wildlife about at that stage, I was in front and only really had to hit the anchors once for an errant roo.

With the fog and the extra stop though  I was falling behind to get to my planned meeting with of at Nyngan so at Gilgandra I topped up again and said farewell to my riding buddies as they settled in for a drink and snack.  I arrived at Nyngan quite late – sorry Rob. Rob was supine on the concrete next to his bike at the BP and was his usual gracious self in response to my tardiness.  Although he did wryly note that this was not the first time.  Here are the bikes at the BP 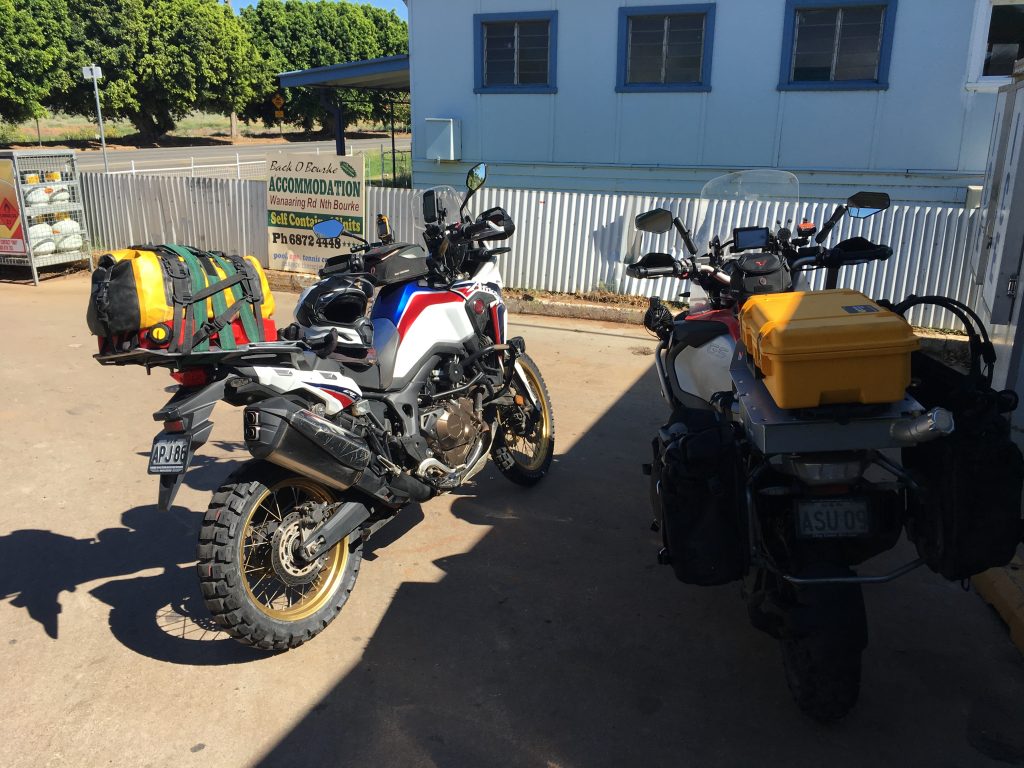 Rob’s GS now sports an auxiliary tank which gives him 1000+ kms range.  A flash bit of kit. We left Nyngan with a plan to refuel at Cobar.  It was a pleasant ride loping along and making full use of the newish McCruise on the Africa Twin. It works a treat!  While we didn’t see much wildlife in that stretch we were to find out later that Bill had had an encounter with a roo around there that saw him taken to Dubbo Hospital accompanied by Ox and Nic, their ride was ended.  Thankfully Bill wasn’t too seriously injured.

You should never ride past this without taking a photo! 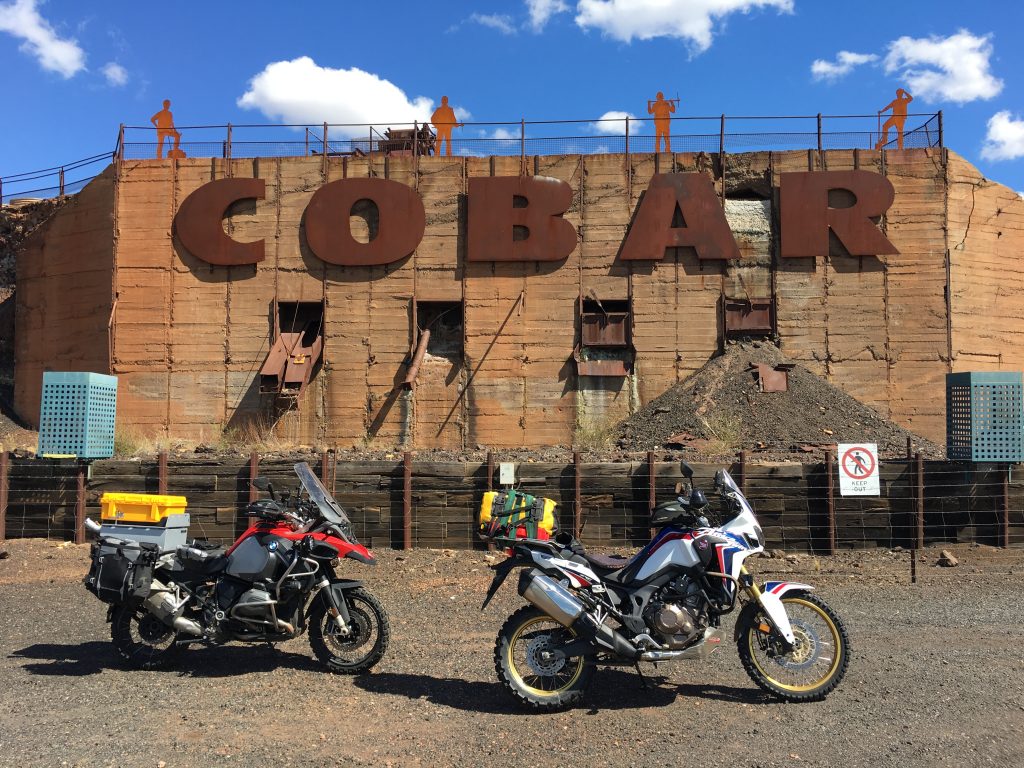 We refuelled at Cobar and didn’t muck around as we were heading to Emmdale for another top-up and some food and coffee.  Once again we marvelled at the variety of backpackers working there, two Birminghamese and a German today and also remained in awe of how fresh the rolls are when filled with bacon and egg.  We always try to stop here to support it, it’s a little oasis in the middle of nowhere.

We sat there and chatted for way too long.  Perhaps it was a misunderstanding about who’s plan we were riding but by the time we got up to leave some doubt had crept in about getting to Ivanhoe in time to refuel.  We took the safe option and headed past the Cobb to Wilcannia for a top-up at the BP which saw us both with enough on board to get to Hay if Ivanhoe was shut.

Then back to the Cobb Hwy.  I’ve wanted to ride down it for years. The first bit is tar, then it turns dirty.  Straight up we found ourselves riding in narrow tyre tracks surrounded by 10cm or more high mounds of gravel and stones.  Look forward Wom and don’t ride into the stones! Then a little reprieve before hitting stretches of sand/dust filling ruts and corrugations the first of which saw me heading uncontrollably towards a table drain.  Look forward Wom, power on, breathe.  I held it together and got a little more focussed. It was more of the same for the next 140kms or so but after the initial shock and developing a routine it was pretty well manageable.

Here’s Rob taking a break.  He reported having some tank slapping moments in the sand, but all good ones if you don’t mind a bit of puckering. 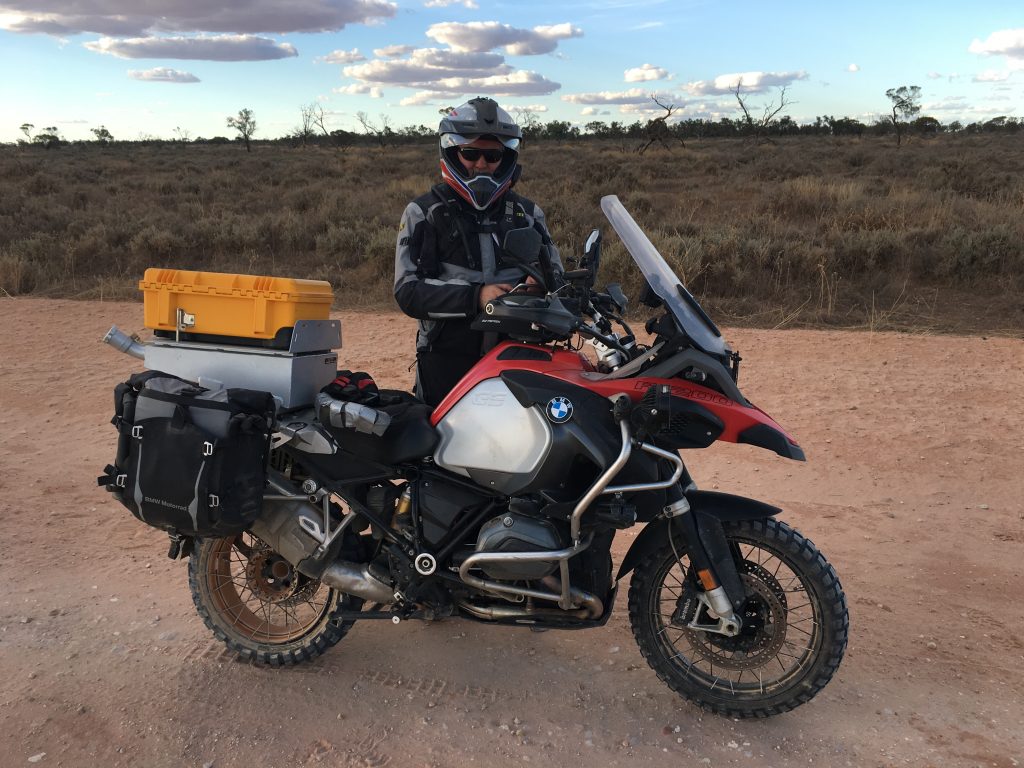 There were roos about, clearly not used to traffic. At one point I was riding along about 80kph and one shot out from my right and tried to overtake the bike and cross in front.  Instinctively I kicked out with my Alpinestars Tech 7 and collected it on the base of the skull just before it was about to jump into the side of the AT.  I don’t recommend this method of roo deflection.  While it’s an unpleasant feeling for the foot I guess it was much less pleasant for the roo. It veered off without further damage to me or the bike but it was apparent it wasn’t going much further.  I stopped up the road a bit to gather my wits and Rob took the lead. This was one of the nicer stretches. 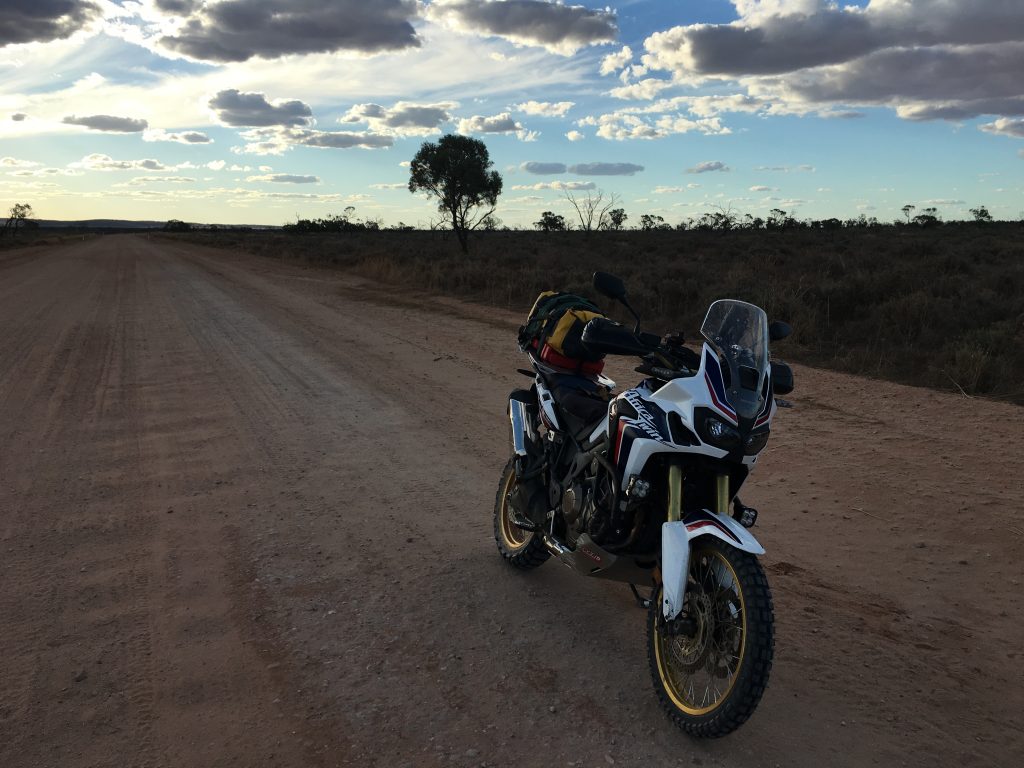 We were soon near the end of the gravel and near Ivanhoe. 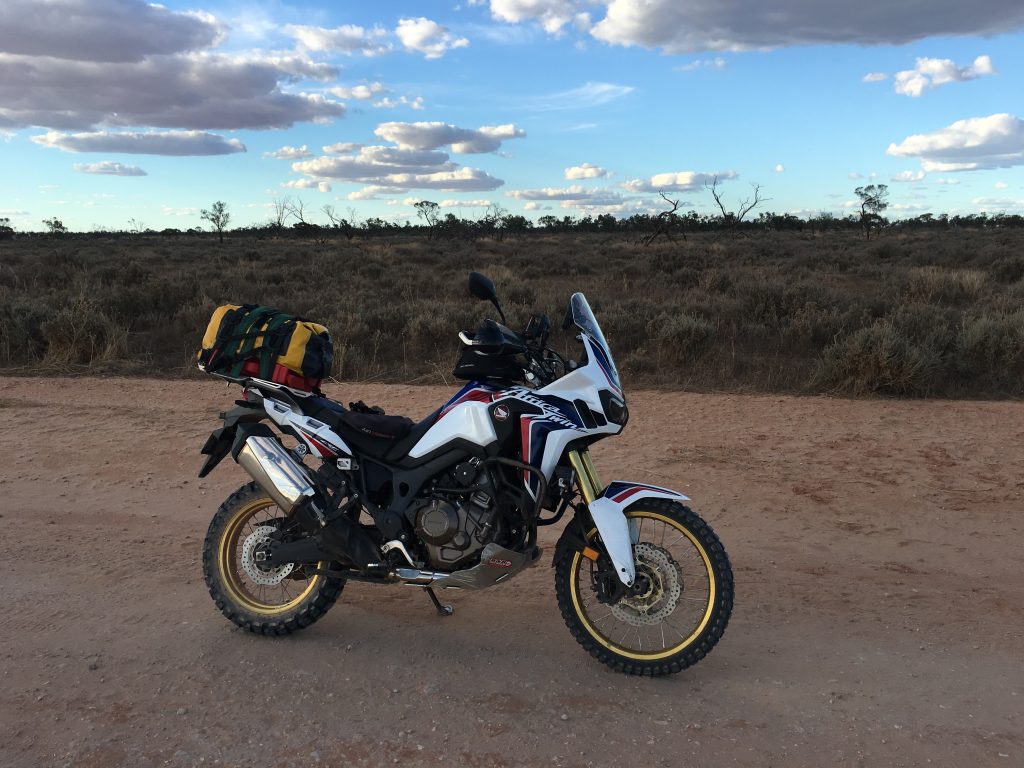 The servo was shut and we made the decision to push on.  200m up the road the Caravan Park shop was open sporting an Unleaded Pump out the front so I filled up and all was good with the world.

The Cobb Hwy between Ivanhoe and Hay is all tar.  The sun went down and the wildlife came out in abundance.  I was amazed by the number of roos about. It’s definitely not a road to be on at night. Rob’s sun-bright Clearwater Sevina’s help markedly though as he took point on the bg GSA. Soon enough though we arrived in Hay South and stopped for more fuel and a purported beef burger.

We rode west through Balranald and stopped again at Buronga for fuel, coffee and a chat, rode through Mildura for the final push to Renmark. About 80k’s out Rob needed a powernap so he pulled over and suggested I continue. I arrived at Renmark just before 2am, grabbed a docket at an ATM and headed to the Renmark Hotel.

There were other riders arriving from all over the place.  Some had arrived early and had clearly been waiting in the bar for a while. Skiddooo signed my witness form and some chatting was done before heading to bed.

It was around 1700k’s for the day.  It was very laid back, no sense of urgency.  Rob and I just took out time and enjoyed the day on the bikes.  With the Cobb Hwy finally ridden I don’t have a burning desire to do it again.  It was however great to dial in the dirt skills for my upcoming adventure that was now only a couple of days away and it’s always great to go riding with mates.