I arrived at the BP at Beresfield at 5.15am a little late because Zanderhar went back to sleep when I woke him up at 4.15am to get ready to leave.  Waiting for me was @officerhardass, formerly known as JP and @officerhardass, Steve and Dave, both from the local HOG Chapter.  So with Zanderhar as my pillion it was five of us trying for the Iron Butt Association Saddlesore 1600k. Three 09 Road Kings and an 01 Heritage Softail Classic.  Our destination, Benalla in Victoria – and back.  My wife took the early morning drive to the Service Station so she could sign the Ride Start witness forms for us and with tanks full of fuel (the docket evidencing the start time of the 24 hrs we had to get it done by), we were off.

First stop, BP Normanhust, only 137ks, for a quick drink, morning (well you know) and swap the night glasses for sunglasses.  The weather was perfect, everyone was in great spirits.  The second stop was the Mobil in Pheasant’s nest for some fuel, a quick chat and out as soon as we could be, another 98ks on the clock.

The next planned stop was the BP on the road to Gundagai, the one right near that famous dog on the tuckerbox. 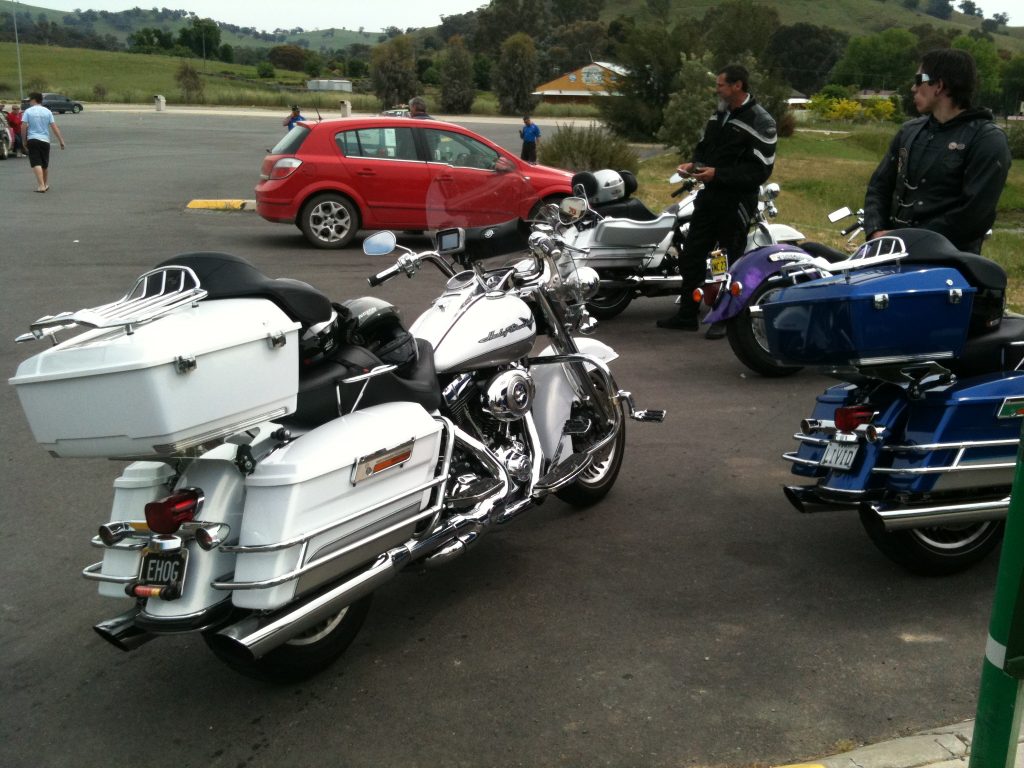 This added another 287ks to the tally with one wee (short) stop somewhere in the middle. At the BP Gundagai we saw a group of patch club riders that we were to see quite a bit of during the day. We also had a brief chat with a nice lady on a Yamaharley (as she called it) who asked us if we only took our bikes out on sunny days because they were shiny.  Must be ’cause jappers dissolve if you care enough to wash ’em.  Fuelling up here gave us enough range to make it all the way to Benalla. Strangely for most of us, as came out in discussions on the way back, this part of the trip was the hardest in terms of focus.  We saw the patch club guys for the second time at the Tarcutta pub as we rode past, they didn’t wave.

@officerhardass took the lead and the plan was to stop at the first rest stop after Albury for a quick snack, we had planned to take our own food to allow us to avoid queues and save time on stops. @officerhardass though, didn’t have food in the house to pack so he rode past one, then two, then three rest stops, oblivious to the needs of the old gents he was riding with.  Dave rode up next to him and indicated he was hungry and @officerhardass thought we were only 60k’s off so ignored the hint.  At the Wangaratta exit, Dave left.  I followed him to try to encourage him to get back on the freeway as the Glenrowan Service Centre was only two k’s further but he wasn’t looking back.  I took the entry on to the freeway, @officerhardass and Steve had stopped by then and we discussed a plan.  We stopped for a very quick coffee at Glenrowan and saw Dave ride by so we jumped back on our Harleys and travelled the short distance down the freeway and into Benalla.  Dave was waiting for us outside the first Service Station, the Caltex.  We were all officially half way there, 814.4kms (Whereis kms). 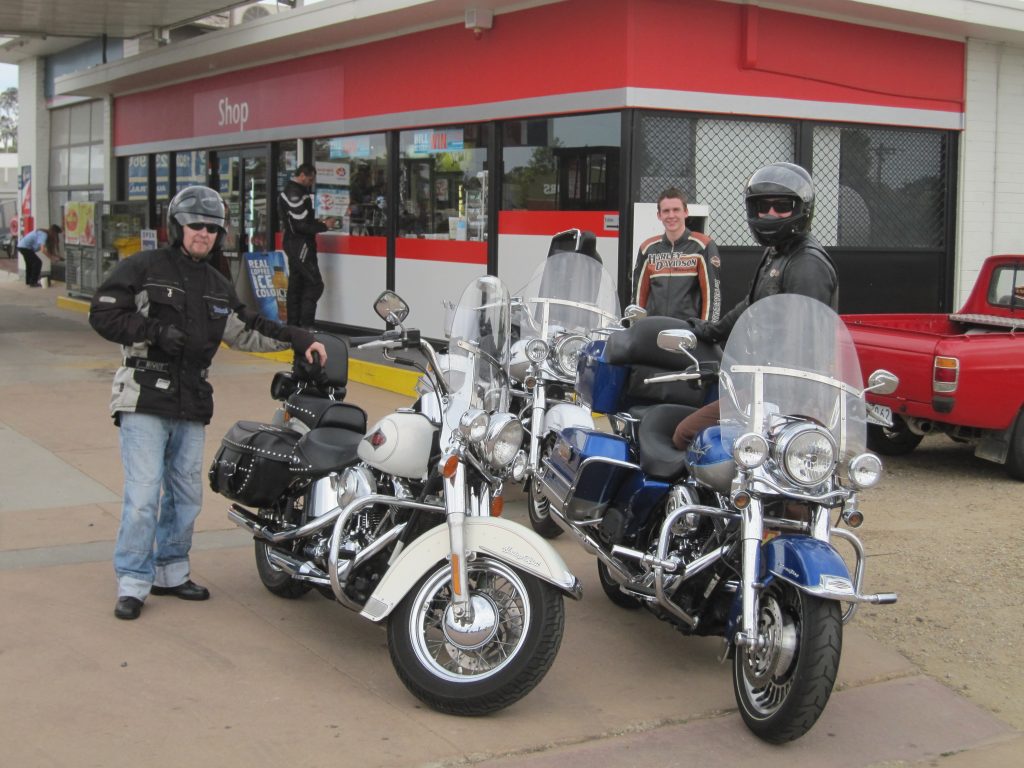 We bought a drink, celebrated the half way point and decided to keep going, this time with Dave in the lead, at least until he rode straight past the entry back on to the Hume Freeway.  Fortunately he saw us take the entry and after a bit of dirt bike riding got his Softail behind us and there he stayed until we decided to pull in to throw some wet weather gear on because of some nasty looking showers sweeping across the landscape in front of us. Fortunately as we continued to Gundagai we didn’t get rained on but we travelled on plenty of very wet roads. At Gundagai we again saw the the group of Patch Club riders we’d been passing by all day. We also arrived in sunshine, having passed the showers so took off some of the wet weather gear. 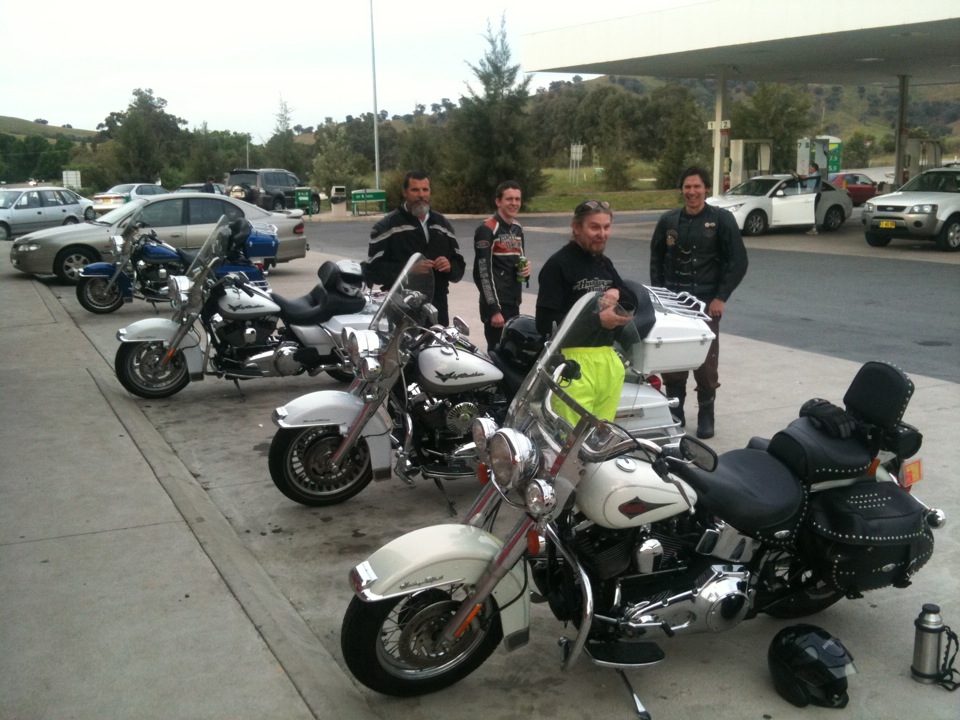 Our next stop was Marulan, and guess who was there…. @officerhardass even got a wave this time!  We decided to take a little more time here to enjoy a servo pie and Red Bull, except Dave who stuck with his green tea.  We were starting to get tired but were our spirits high.  We were sensing success.  Heading into the Southern Highlands we knew it was going to cool down, and from our research we knew getting cold wasn’t conducive to endurance riding, so the outer layers and some inner ones went back on.  The next stop was Thornleigh where it was generally agreed that riding considerable distances on a freeway made it a little challenging tackling the three lanes of traffic winding along Pennant Hills Road. With a top up of fuel there and a call to our end of ride witness (@officerhardass’s wife Krittie) we set off on the last leg of the trip, back to where we started to top up the tank and get the final fuel receipt for evidence of the trip.

While it was obvious we were all extremely pleased about completing the 1630 – 1670kms (depending on whose odometer you looked at) we were sedate in our celebration.  We sat in Hungry Jacks, some of us actually enjoying a fat and carb loaded burger while the paperwork was done and we went quietly our separate ways, keen for sleep.

Great job @officerhardass, Dave and Steve, and a special mention for Zanderhar who once again proved his resilience as a pillion despite discovering that a dark tinted visor wasn’t the best at night.

One thing is certain though, an SS1600k is much more difficult than it looks on paper. And the bike can get dirty too! 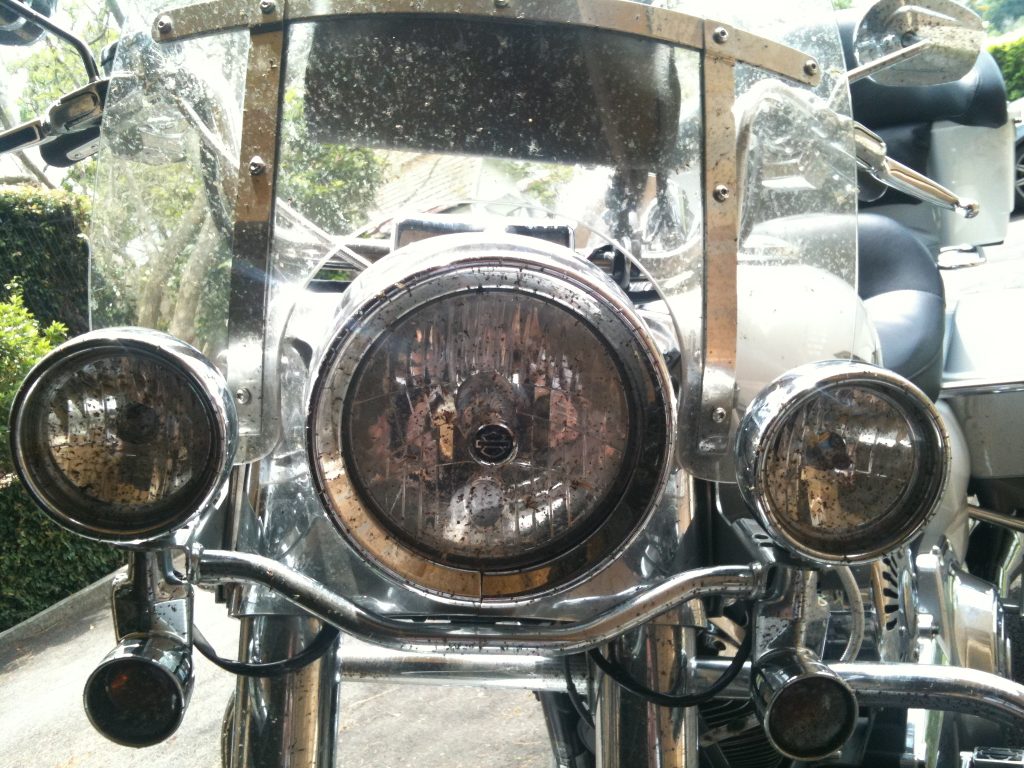