Today was my first attempt at an International Iron Butt Association (IBA) SaddleSore 1600k on my 3 week old Super Tenere. In simple terms I had 24 hours to ride at least 1610kms and document the route, stops and fuel along the way subject to some rules. My other goal for the day was to visit a number of locations to take a photo of the Tenere as part of the FarRiders FarChallenge 2013.

Up really early I left Lambton with a startinf fuel docket timestamped 1.03am and rode my very clean Tenere south towards Sydney.  The nighttime F3 the roadworks were out and about and I was diverted off the Freeway at Morisset and sent through Doyalson eventually connecting back to the Freeway.  The night was cool, reasonably good riding conditions if you don’t mind the dark.

My first stop was Marulan just after 4am for fuel and by then it had started to get quite cool so I decided to finally test out my Jett heated vest.  I was instantly impressed, very nice and warm and a great match for the Super Tenere’s heated grips!  I rode past Yass, Gundagai and turned off the Hume towards Wagga.  On the way through I popped in to Ladysmith on the way not long after the sun came up for a quick photo. 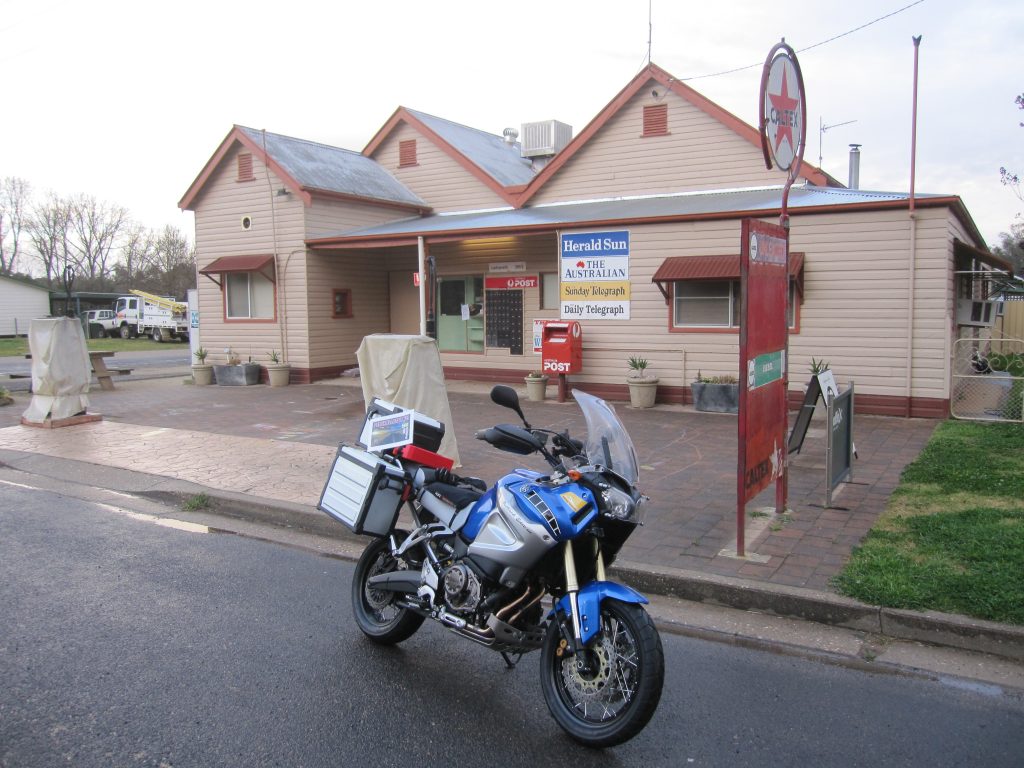 After refuelling at Wagga Wagga I continued west towards Narrandera.  During this part of the trip it started to get ugly.  The wind picked up and there were showers about.  By the time I was half way to Hay it was blowing the proverbial.  The Super Tenere was being blown all over the road and being hit by a rush of air after passing trucks was a real pressure point (pardon the pun).

I stopped at South Hay for fuel, I would have usually taken a few minutes for a drink but I reckon if I’s have gone in and sat down I might not have ventured back out so I got the fuel in and left.  At Balranald I turned south towards Victoria, with the next planned stop at Ouyen.  I crossed into Victoria at Tooleybuc just before midday with a little over 1000ks completed in reasonable time. 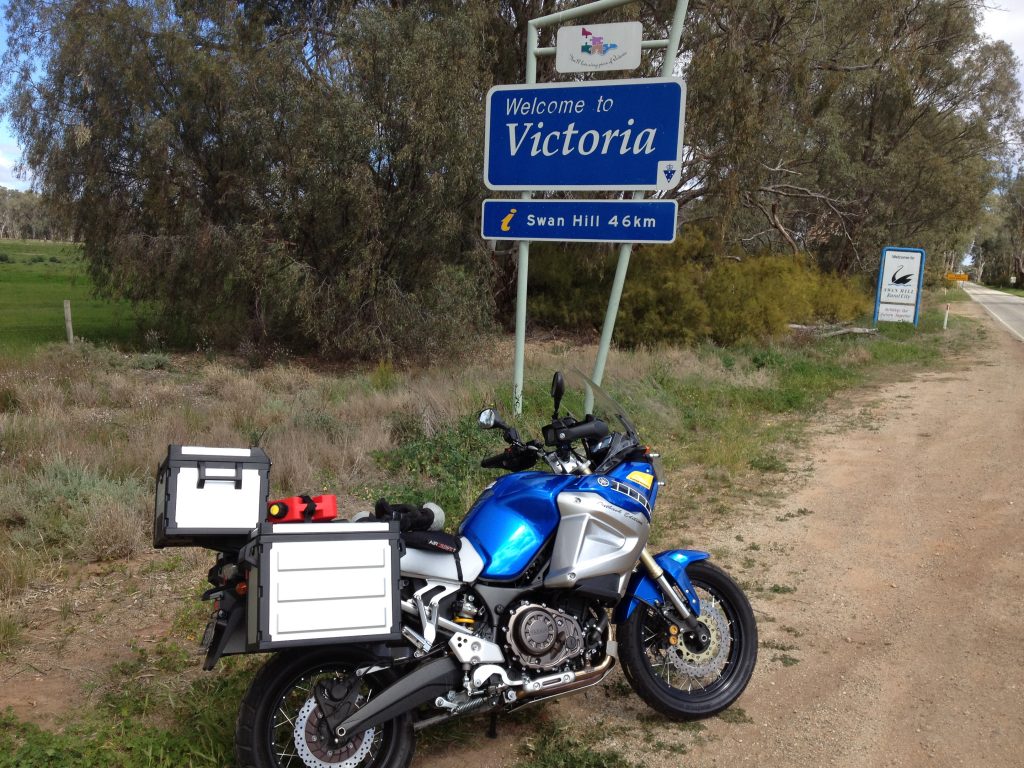 I ended up kicking myself I didn’t put a splash of fuel in at Balranald, the wind significantly increased fuel use, particularly when riding into it  and I arrived at Ouyen on fumes and somewhat stressed.  At that stage the pretty red 4 litre Rotopax jerry can I had strapped to the passsenger seat had not been filled, derrr!  I had a bit of a rest at Ouyen, had a chat with a couple of Truckies and enjoyed the warmth of a servo pie and ordinary coffee.

Back on the bike the next stop was only 130k’s or so down the road at Pinnaroo in South Australia for the second FarChallenge pic of the day.  My plan originally was to make good time to Pinnaroo which worked out despite the horrendous conditions.  For the next 500k’s or so there were lots of stops and some Adelaide traffic coming up to slow me down. 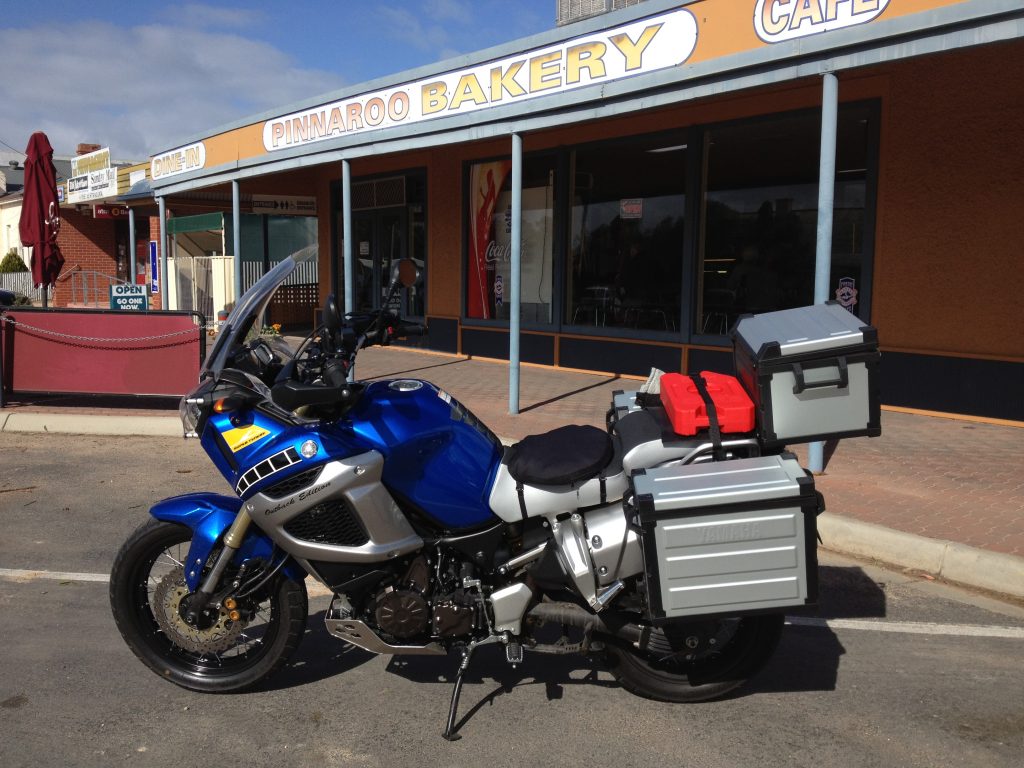 The next stop was just 36k’s up the road at Parilla followed by a fuel stop at Lameroo. You’ll note the A4 Certificate positioned on the bike, this was produced this year and confirms that the FarChallenge pics were taken during the challenge, not at some other time. 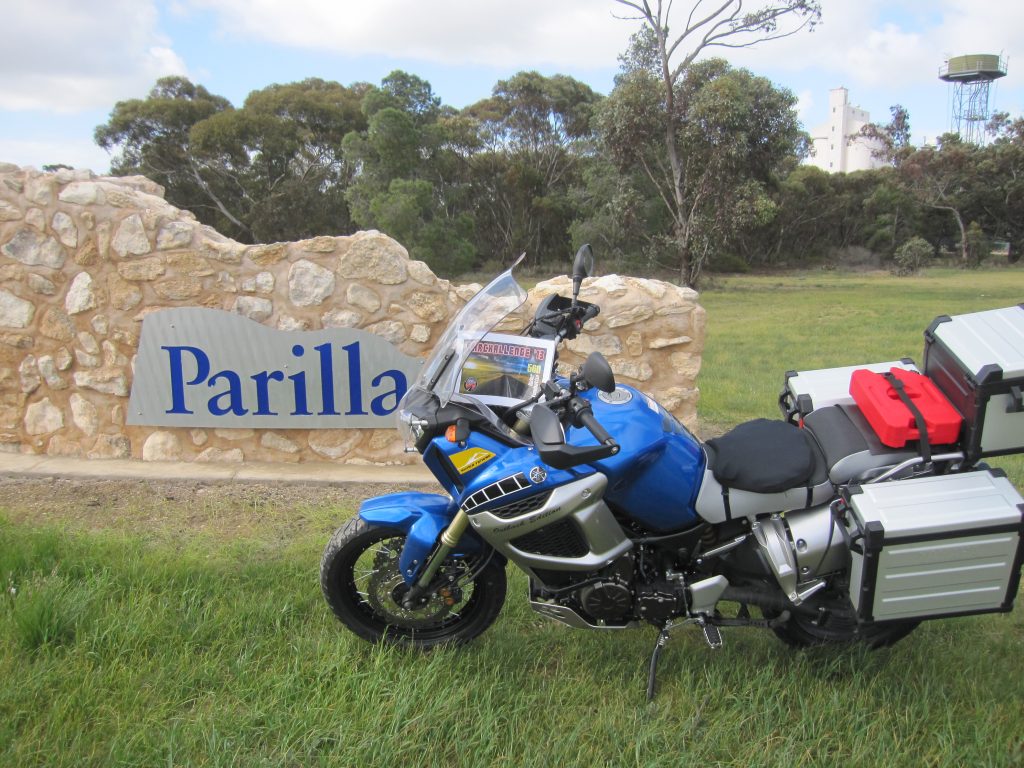 The road after Parilla was fun, nice wide open curves one after another, even the headwind didn’t reduce the smile factor too much.  I haven’t been this way before, lots to look at on the way through Tailem Bend, and Old Tailem Bend,  and then on some nice hilly roads heading more south to Strathalbyn for yet another pic. 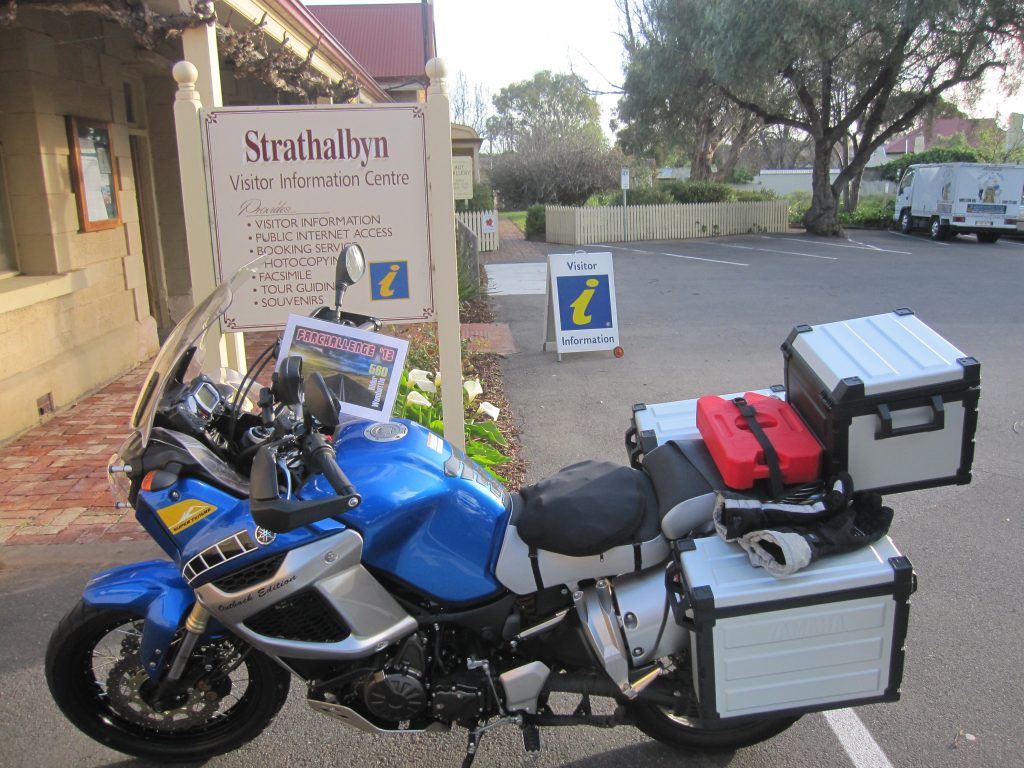 After Strathalbyn I rode to Clarendon on a sensational picturesque and winding road. 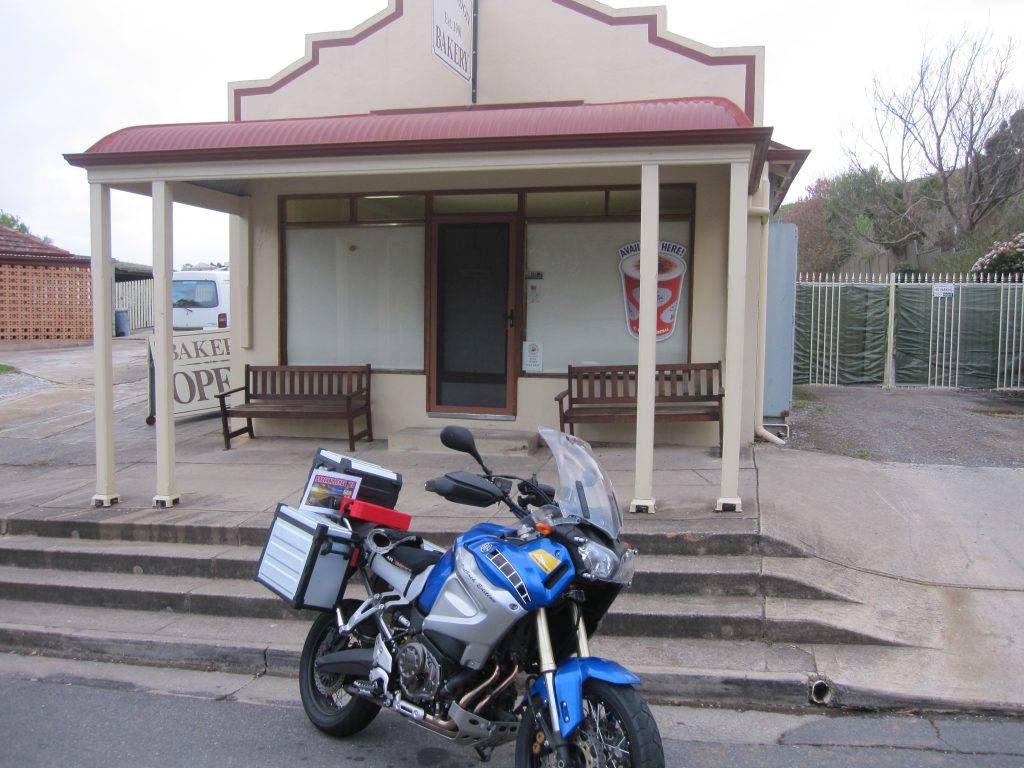 This was the first time I’d ridden in South Australia in enough daylight to start making sense of the strange lane markings at intersections, certainly takes a bit of getting used to. 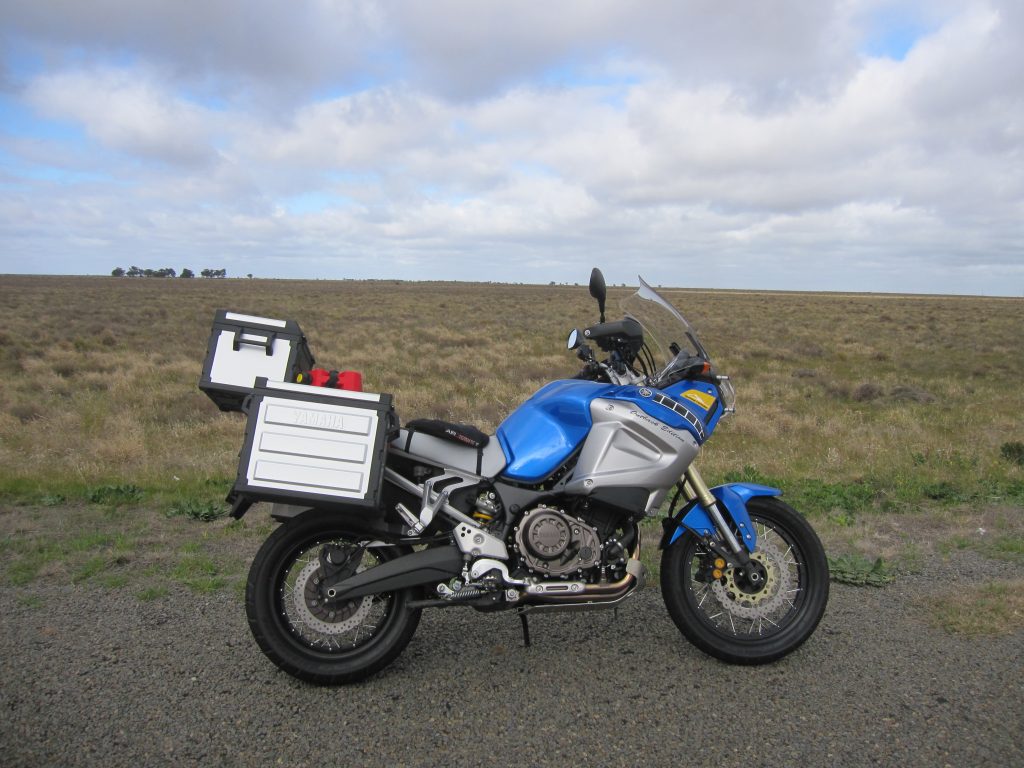 The next part of the ride wasn’t so much fun, skirting around southwest Adelaide in heavy traffic and roadworks. After a quick stop for fuel at Edwardstown I headed back onto a freeway heading northish towards Gawler as the sun went down.  I followed the GPS to Tarlee, there wasn’t a lot to see out there in the dark.  My initial plan was to stop for the night at Tarlee, by then I’d done enough k’s to finish the SS1600k. 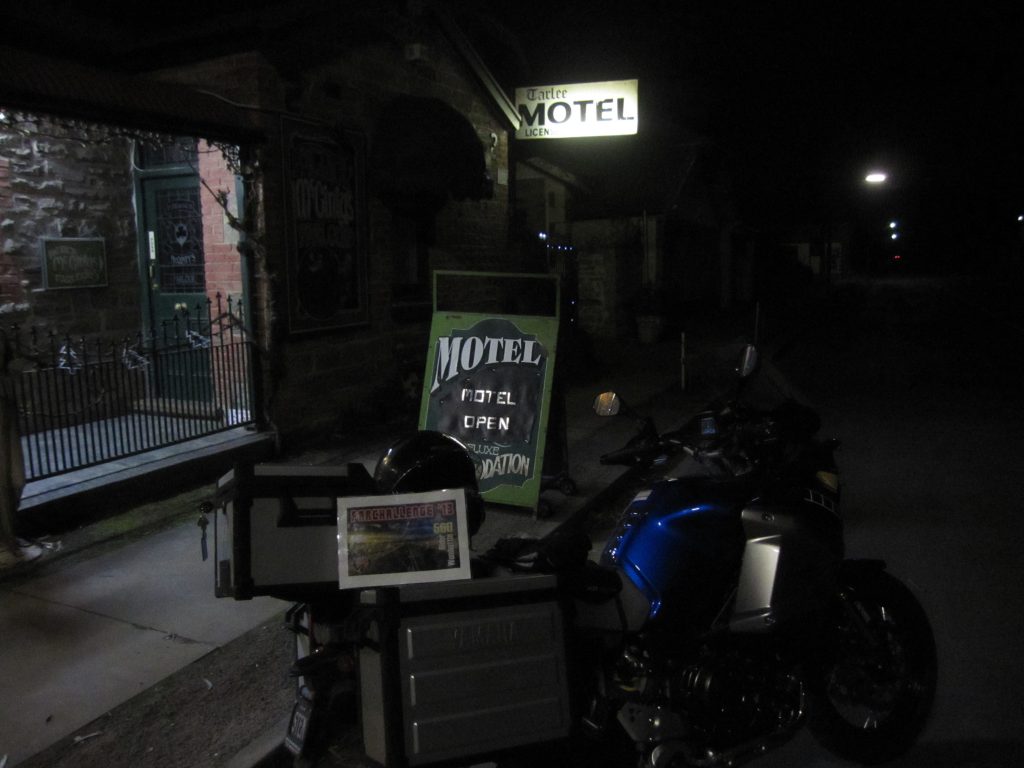 Sadly the Tarlee Motel advertising 24 hour reception was locked up and the phone number for service went to an anwering machine.  Oh well, I was still feeling fine so I snapped a pic of the Tarlee Institute in the dark and it was on to Burra. 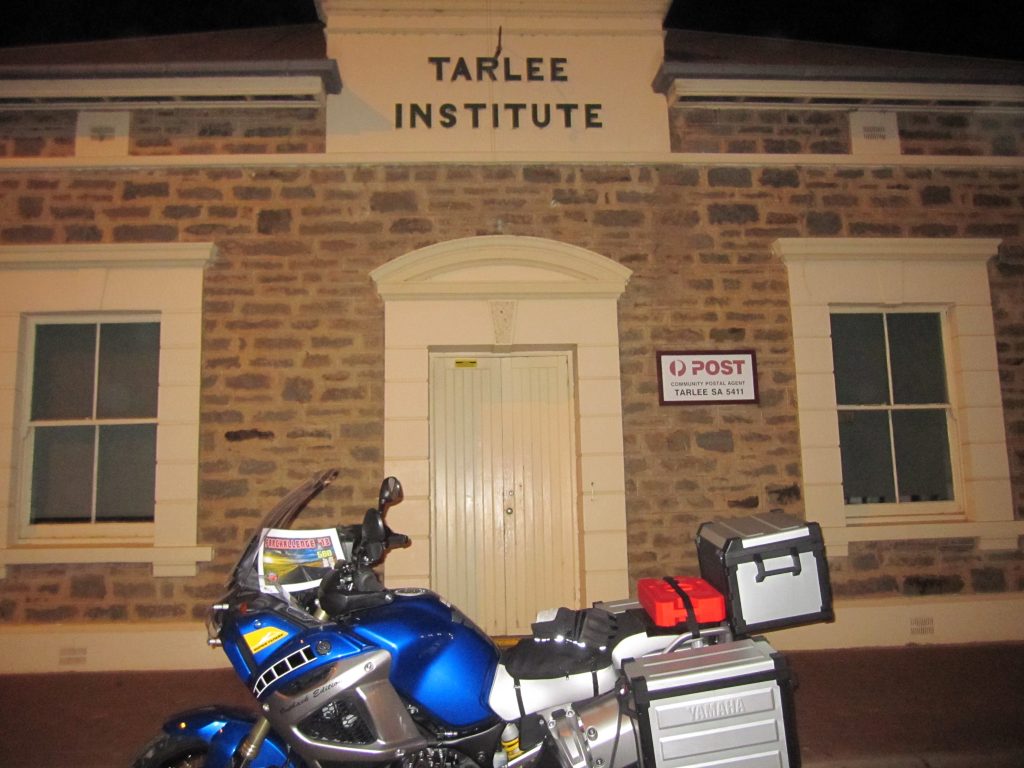 The roads weren’t too challenging, I was riding on auto pilot.  Wildlife and traffic were both very scarce so only one fox later I was in Burra just after 9pm our time.  The Burra Roadhouse was closing up but I squeaked in a fuel docket and grabbed an end of ride witness to confirm my arrival and the odometer.  While they had finished serving food for the night the very nice Emily threw together a quarter of a BBQ chicken and some salad.  She also gave me the number of the Burra Motel where I scored a room. There I did the usual, checked all the receipts, the ride log, the distances and time zones while I scoffed down the chicken.  Happy that everything was in order a good sleep was required.