I bought an Ultimate BeadRider a little while back and I hadn’t yet taken it for a test run. A day off today saw me find the opportunity to do just that and also to take my Super Tenere out for a run. It’s been a while since it has been out of the garage. It was a late afternoon decision for an early departure so with no time to properly plan anything in particular I decided to redo a run to Queensland I did in January but in the other direction.  I was going to say in reverse but everyone knows the Super-Tenere doesn’t have that gear. In any case, there’s nothing like a different perspective on a good ride.

I slipped out of the local servo a touch after 3am with a tank full along with my two favourite 10 litre jerry cans.  I didn’t really get time to plan what the fuel stops would look like so I decided to just wing it and see what efficiencies I could realise along the way by using them.

It was a relatively mild night heading north through Singleton, Muswellbrook and Scone NSW with the coldest part of the day crossing the Breeza Plains towards Gunnedah.  I arrived in Gunnedah on reserve and decided to fill up at the Caltex but not stop at McDonalds for a warming coffee. The Jett Heated Vest and the Hoteeze in the boots did their job until the sun took over in the section to Narrabri and Moree (500kms).

I stopped for a quick picture at the Wobbly Boot Pub in Bogabilla (606kms). I have a friend who had done some mission work up this way and had a cunning plan to stir him up a little – another story. 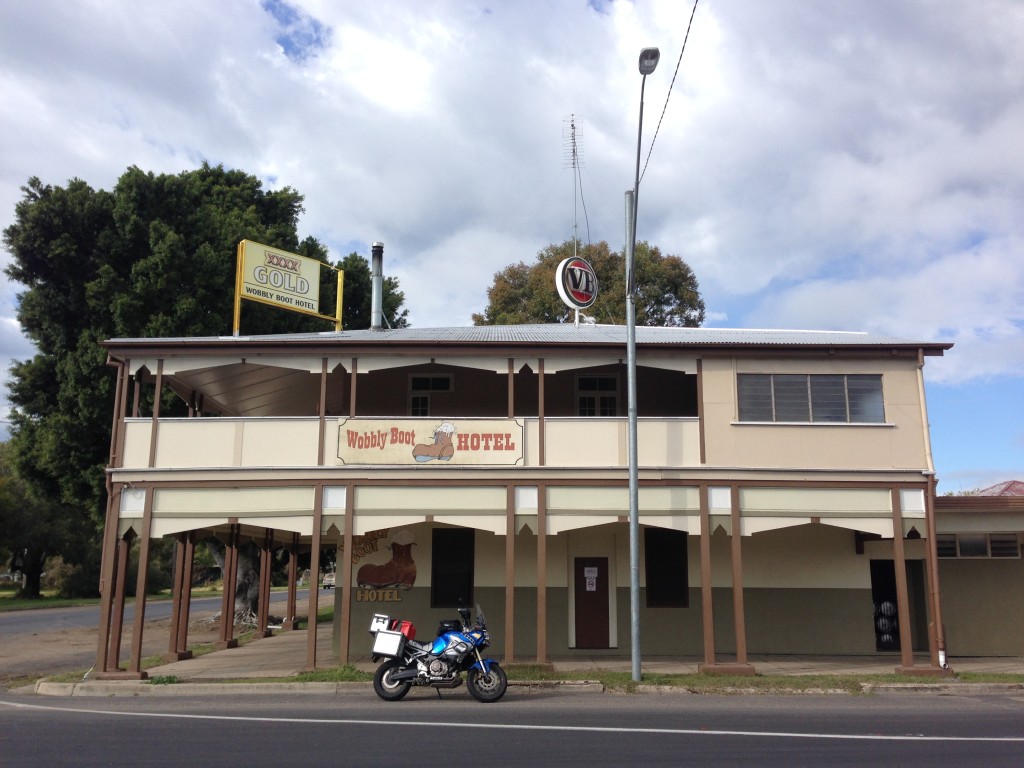 My next stop was just over the Queensland Border at Goondiwindi.  I wasn’t in a rush today so I took some time out for some hot food and a coffee. The bike was again on reserve when I arrived there so I filled the tank and left the jerrys full.  While eating I decided to take photos of a few of the quaint places I was to ride through today. I rushed through them last time I was up this way on a bit of an efficiency mission and tight schedule.

Turning west towards Talwood the roadkill became very apparent.  This is not really an area I’d want to ride in at night unless there was a very good reason. It’s nice country up there and there were signs of the recent rain with lots of water lying about. The next stop for a pub pic was the Toobeah Pub. 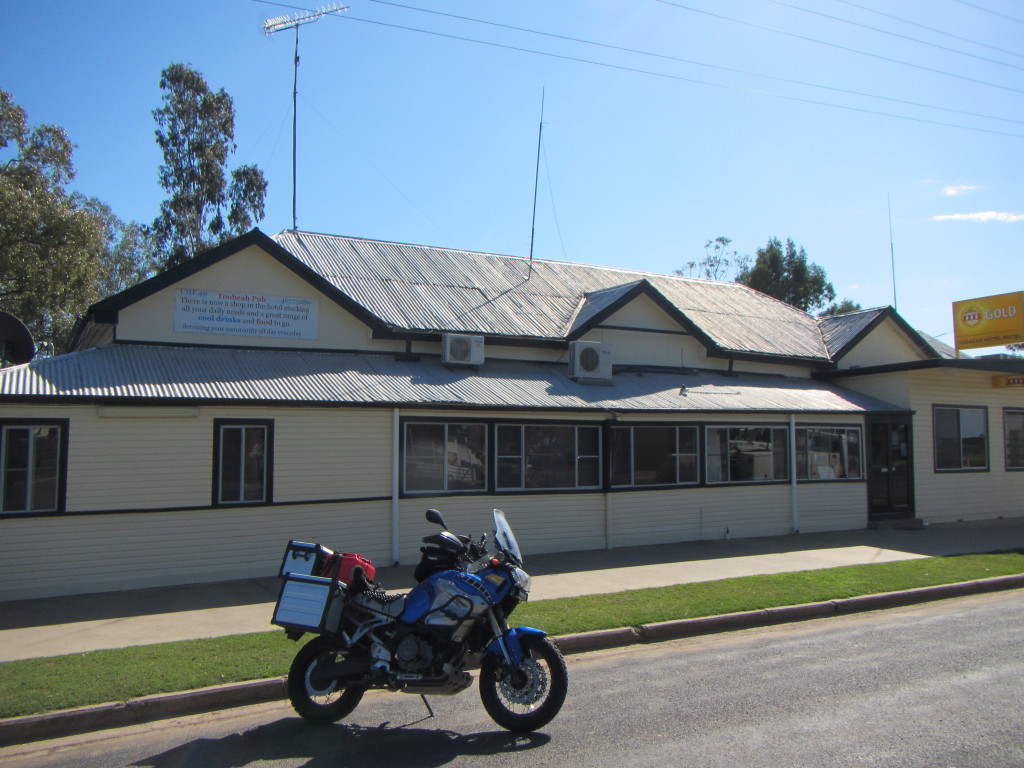 Surprisingly, despite the sun being high and being in Queensland the day hadn’t warmed enough for me to take any layers, or my balaclava off.  Sadly it didn’t reach a temperature that would persuade me to for the whole day.  Turning right at Thallon the couple of kilometres of dirt road was still there however in much worse condition that when I was here in January. Still rideable with care on a road bike, no problems at all on K60’s on the Super Tenere. The next stop was Nindigully Pub, a FarRider favourite.  Once again, I didn’t have an opportunity to savour one of their famous hamburgers, maybe next time. 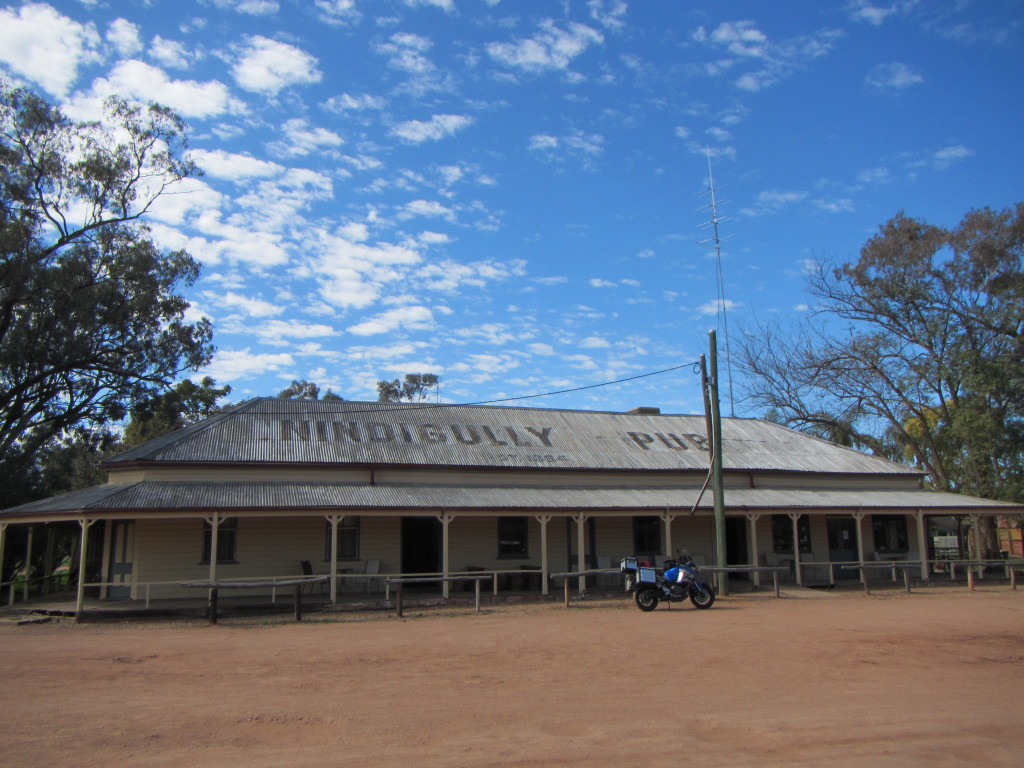 Continuing west I stopped at the Bakery at Dirranbandi (869kms) for some home made walnut baclava and a drink.  I topped up the tank up with one and a half or so of the jerry cans  which would see me through to Walgett.  I grabbed a quick pic at the pub there too. 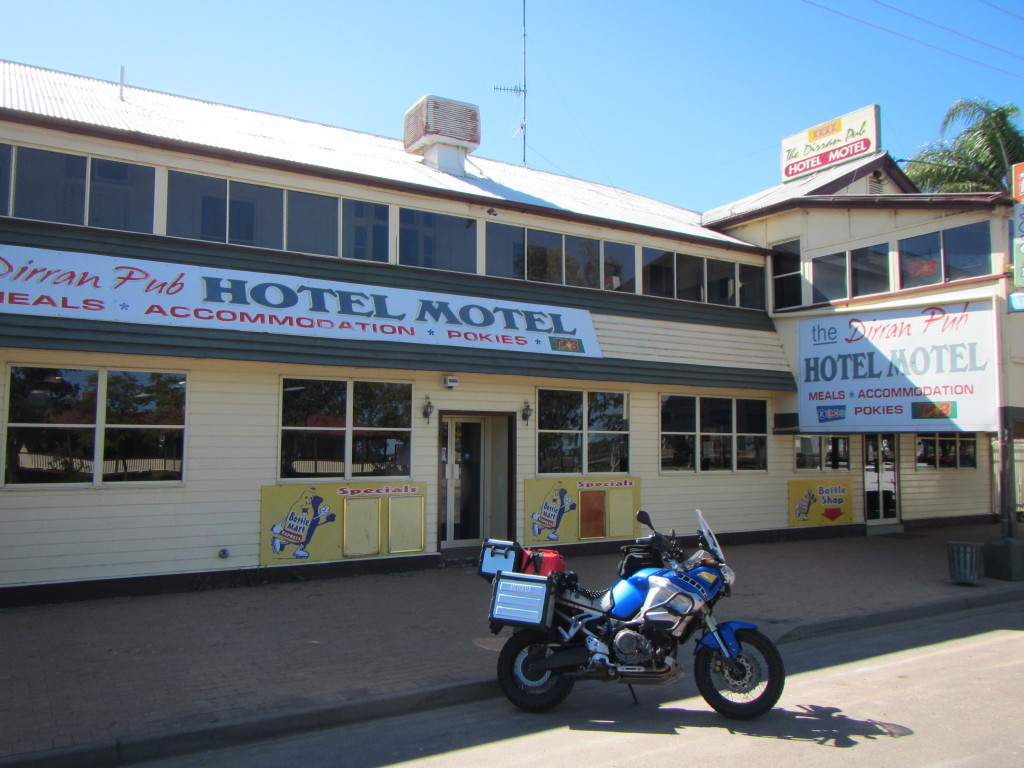 Continuing west the next town of note was Hebel (935kms), with their very old fashioned pub well patronised for that time of day. 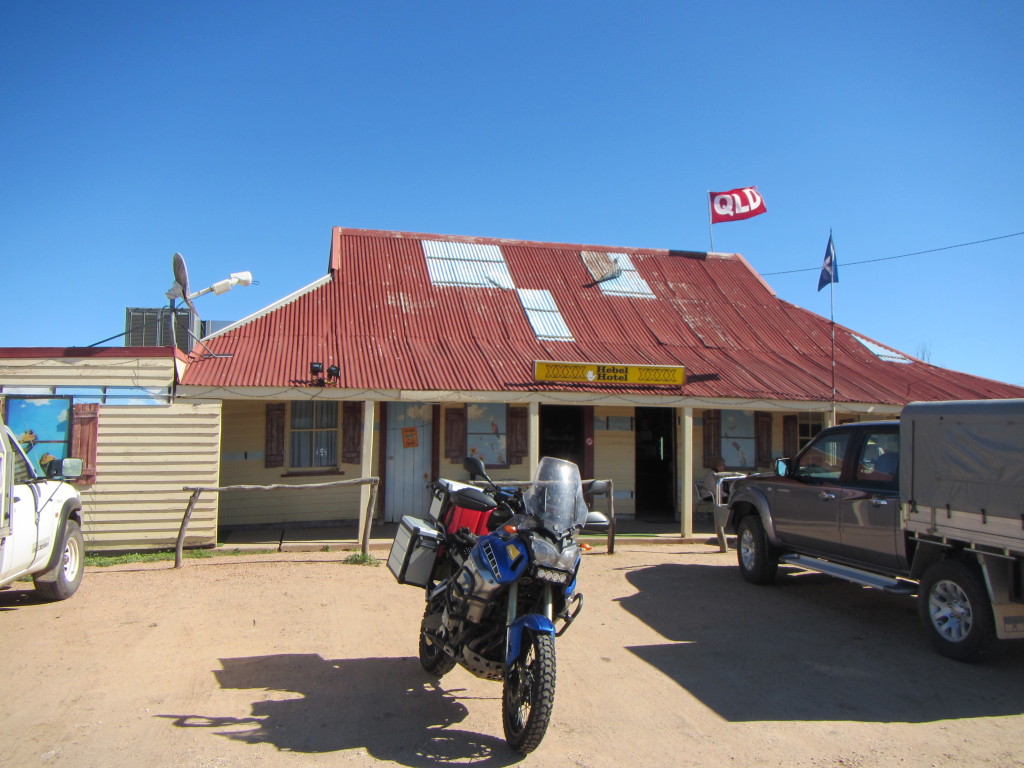 A short time later I was welcomed back into New South Wales and then 50 metres down the road we are reminded that the revenooers like to take our pictures.

This part of the trip gave me pause to consider how the BeadRider was working for me.  All up it was pretty good on the butt, but……. The seat on the Super Tenere is not flat and I normally sit towards the back of it.  An Airhawk accommodates that because the pockets of air conform to where I sit and level the seat out.  The BeadRider doesn’t so I kept “rolling” down to the lowest part of the seat. This meant that I was “stuck” on that part of the seat for much of the ride. This left me positioned closer to the bars, closed my knees up a bit a little and the only way to stretch out was to push back with my arms and hold the tank with my knees/upper legs. Let go and I rolled back down. All that was good enough until my hip adductors and shoulders started complaining about the additional work involved. More later.

Last time I was up this way I made a mental note to take a picture of this thing at the intersection that leads to the opal mining town of Lightning Ridge. I have no idea what it is but it’s painted one of my favourite colours and it says “Welcome”. 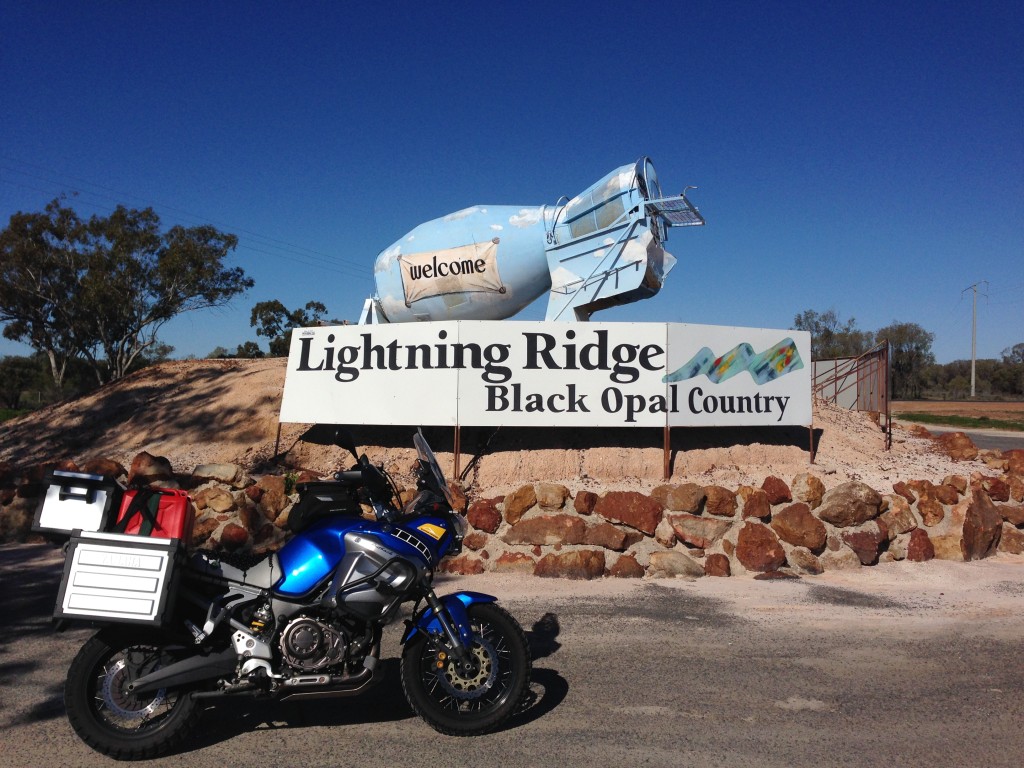 My next fuel stop was Walgett (1070kms). Fuel consumption for the Super Tenere was up this trip. This was in some part because of wind which had whipped up a little but also because I decided to do this ride with the panniers on. They were empty but the Super Tenere looks very cool with them in place!  If not for the increased fuel consumption a full tank the the two jerry cans would have seen me make it home from Walgett without the need for another servo stop or docket to comply with the IBA 600km rule.

The quickly knocked together plan had me arriving at Gilgandra just on or just after dark to “reset” myself for night riding, as is my routine. However at Walgett I was 36 minutes ahead of the rough plan and knew I’d make up some more time riding the next leg. So I decided to try to do a quick fuel stop at Gilgandra and tackle the highly roo populated area from there through Mendooran to Duneedoo using as much of the remaining daylight as I could.

I usually stop at the Shell Truckport at Gilgandra but decided, rather than do the 1km or so detour, I’d stop at the BP on the way in to town.  I stopped at there and while I was getting set up to refuel the console operator came out to tell me if I intended putting fuel in a jerry I’d need to put it on the ground.  I knew I had a few litres left in one and rather than waste that time I decided to take a punt, fill the front only and head off.  If I needed to stop again it would be in the dark. I wasn’t short of time for the ride, just daylight.

I got through to Mendooran at dusk and during the next part of the ride to Duneedoo I saw more kangaroos and rabbits than I’ve ever seen there.  At one point a large reddish roo was approaching the road from my right that brought on a moment of deja vu. Fortunately it hopped straight into a wire fence, bounced backwards and then tried to jump higher to get over the fence. By the time it cleared the fence, if it did, I had ridden past and wasn’t looking back. Two foxes even decided to play chicken with me rather than steal them from the locals. I started getting uptight and a bit paranoid, but not enough to see bushes jumping out at me.

I arrived a Duneedoo (1372 kms) and took some time to process what was going on.  I’m sure there was a measure of wildlife hyper-vigilance given my recent collision with a roo (and not just mine). So my reaction to seeing them may have been heightened. But, even considering that, the numbers were definitely up, I’ve ridden this area in the dark many times. A few deep breaths and a plan to take it very easy for the rest of the ride. After a snack and drink from the topbox, putting the last of the jerry fuel into the tank and swapping the battery on the Jett Vest for a fully charged one it was time to mount up and ride home.

The rest of the ride was uneventful.  More roo sightings, particularly after passing through Jerry’s Plains. Thankfully most were well behaved or hopped across far enough ahead of me to avoid easily. Traffic was very light, the moon was low, the evening was cool but I was still wearing all the warm gear I left in at 3am that morning.

The quickly cooling evening however did exacerbate the muscle fatigue issues in the shoulders and legs that resulted from the BeadRider putting me in a position I didn’t want to stay in.  I packed the pain away and decided not to replace the BeadRider with the Airhawk that was in the top box in case of emergency.

I was very glad to get out of the trees and punch out onto the Hunter Expressway for the last section. Turning right I was confident that my punt/calculations at Gilgandra about fuel range seemed correct so I wouldn’t need to put a squirt in at the United just up the hill on the left.

I arrived at the local servo shortly after 9pm with the instruments telling me I was 22kms into reserve.  I filled up the tank and grabbed a Cherry Ripe twin pack and secured my end docket. Ride done. 1652kms or so in a shade under 18 hours. Stopped time about 1hr 45mins, more than I’d usually stop but today wasn’t about efficiency, it was just about getting out there for a ride.

The BeadRider would have been great if the stock seat on the Tenere was level or the curve in the seat suited my preferred riding position. Because neither was the case, on that bike the airhawk is the go for me.  Despite that, it’s clear the hard beads aren’t hard on the derriere.  It would be really good for hot weather, allowing more airflow than the Airhawk.  Conversely the extra airflow was noticeable in the same area in the cold, if you know what I mean. 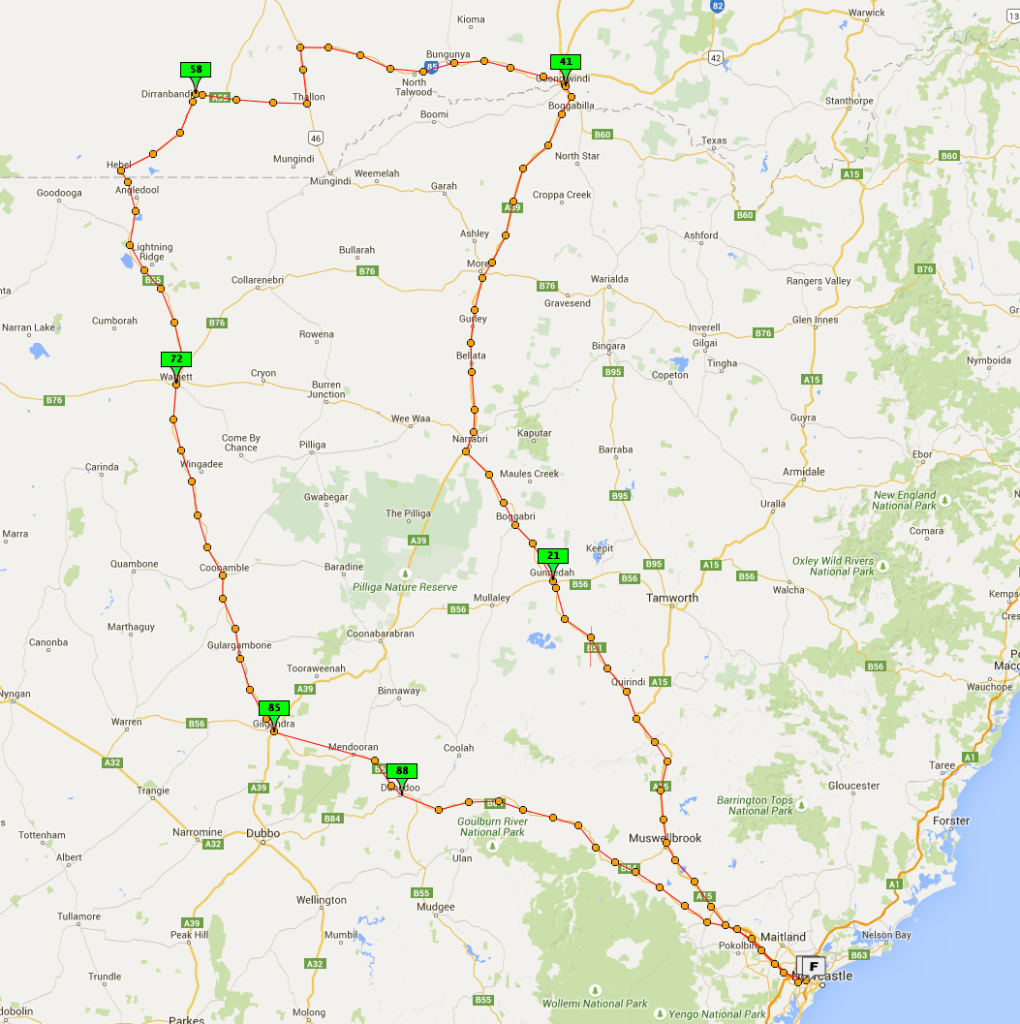