“You can’t ride to Cairns in a day from Newcastle” “No you say? Lets see.”

Central and Northern Queensland isn’t really my favourite place to ride, no offence to the locals but there’s a couple of things that make IBA pace there hard to do. An abundance of critters and low speed limits. So making a plan to ride a Michael Ohaira under 2300kms from Newcastle to Cairns in one day needed some attention and care.

First, an OA of 96 was going to be tough,  Google Maps says 27 hours I had 24. I still have nightmares of a trip between Hughenden and Winton one night.. roos, pigs, sheep, cows and big dark shadows I couldn’t identify mixed in with a nice flashing bright thunderstorm and drops as big as big drops.  And the period leading up to the ride, let’s throw in a cyclone and bulk precipitation.

First thing to do though was to trim the Road King down, that is, lost the top box and replace it with the Kuryakyn bag on the back seat and the 20 litre jerry strapped on to the quick release rack and sissy bar that replaces the top box. This is my usual Iron Butt config for the H-D. 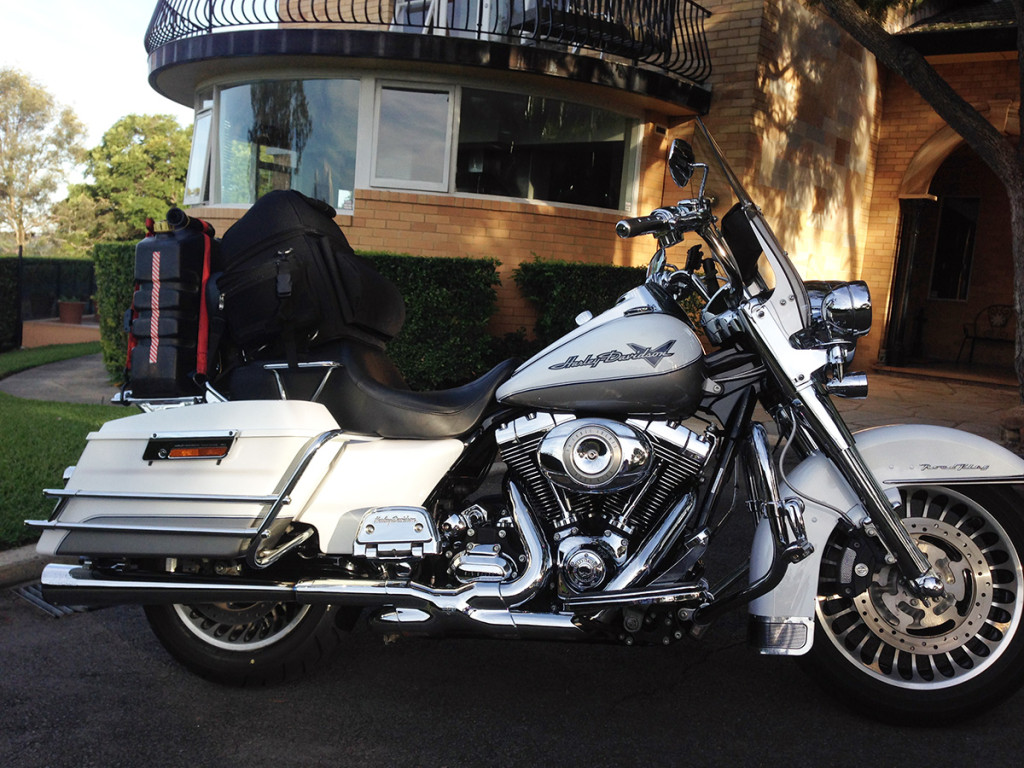 Tele (K1600GT) decided to come along for the ride for part of the way, to Roma, where he was going to change direction and have a crack at his own SS1600k or more. So we met at the 7-Eleven at Lambton with the Newy signout committee (thanks once again OX-34 and 93TigerBill, you are both gems) and a docket time of 00:01:50 which gave me 23hrs 58mins and 10secs (is that right?) to get to Cairns so I could say “I rode there on Thursday!”

Another reason leaving at that time felt good for me was I’d hoped to do most of the nastier areas of Queensland in the daylight. The forecast was goodish, most of my HOG friends who’d left for Cairns the weekend before got wet on their way up.

Off we went with me at in the lead and Tele behind. We took full advantage of the new Hunter Expressway to Branxton. Further north on the New England to the Willow Tree Truckstop where we stopped on the corner for Tele to take care of some business.

We rode through Quirindi across the Breeza Plain after which we were directed on to a dirt road as the highway was closed at Curlewis.  They were fixing the railway crossing there. It was fun hooning up the dirt in the dark on the Road King. I’m not sure Tele was enjoying the dirt as much as me, you’d have to ask him. , At Gunnedah under lights I put a big splash into the Harley from the 20litre jerry and a bigger splash on the tank, motor and my leg. I’m out of practice with the big black can.

Tele put some fuel in at Boggabri, we were both set for the next stop at Moree. The we hit some pea soup fog.  I was really glad I took my Baja Designs SII LED’s off STEN and had them mounted on the crash bars of the Harley. I waded through the soup with no probs. I lost sight of Tele’s headlights, not sure if the fog was too thick or he was falling back.  I had an OA of 96kph to hit, I was already behind it to a worrying degree.

While I was filling up at Moree Tele rode into the BP and went through the process.  I was ready to head out, I saw Tele putting his helmet on and I pulled out into traffic. It was still dark, but not for long. The fog was gone I was sure he’d catch up.  He didn’t, as I understand it, because a have-a-chat that caught him at the servo and a GPS brain fart that took him to St George the long way instead of our planned route.

Not knowing that I sat on the speed limit looking in the mirrors until the sun came up. I changed the night specs for the day specs and waited a bit. No Tele. I tried Tele Kinesis. Didn’t work!  It was time to get moving.

At St George I filled up again, hung around a bit but got to the point where if I were to get this ride done I needed to get really efficient.  I later got a text from Tele letting me know all was good and that he was on another path.

Maths, more maths ticking around the head, I was behind the OA, but it was creeping up slowly in the plethora of 100km zones up to Roma.  I got fuel at Rolleston and rode through Springsure to Emerald.  Somewhere along there I think I passed the half way point and I wasn’t yet on my OA. I made full use of the 110k zones when they came along and as I like to do, took the shortest routes around the bends. I don’t know if it works, it’s just fun.

The day was warming up.  I still had on my LD Comfort tights with thermals over the top and my heated vest, which wasn’t on. Not too hot for me yet though, I was on top of the nutrition and hydration and feeling good.

The Gregory Developmental Road seemed well enough sealed but time after time I got hammered by dips in the road that knocked my breath out.  Along there somewhere the 20litre jerry jumped off the rack but the tie towns didn’t completely fail.  I was dragging it along behind me and with the subtle note of the Harley and the Starcom pumping out my favourite tunes I had no idea.

My plan was to refill out of the jerry somewhere before Charters Towers. There were daytime roos a plenty and unfenced stock everywhere, I didn’t want to be on that road after dark.  I almost rode past the Belyando Crossing Roadhouse and at the very last second hit the brakes and rode in. The staff came out laughing and pointing at the remnants of my favourite jerry hanging off the back of the bike, a gaping hole in the bottom of it where the fuel used to be.  If I hadn’t stopped I’d have been refilling with air somewhere in the middle of nowhere. Phew!

So I filled up there, took a moment, took the vest off drank some gatorade and regathered my thoughts considering what changes I might need to make to the fuel strategy without the jerry.

I was pretty close to the OA but the delay there cost me a bit and the sun was fast heading for Perth so I turned the wick up a bit for the first time in the day and made for Charters Towers toute de suite(ish), arriving not too long after dusk.

I have to admit I was feeling pretty sore after the caning I’d received on the roads. I self checked, called the missus, had some flavoured milk and headed off into the night.  I hadn’t booked any accommodation in Cairns and at this point I wasn’t sure I’d make it.  The plan for this part of the ride was just keep an eye on how I was going and stay above the OA that I’d finally reeled in to a touch over 98. But I was very willing to pull the pin on the ride if things went downhill for me.

I rode down the hill to Townsville and the roadworks started.  The GPS had me arriving a few minutes late, I couldn’t see the etrex in the dark so I focused on the GPS, clawing back a minute here and a minute there only to have it wiped off by automatic light controlled roadworks.  This happened four times.

A big self check at Ingham, making sure the building frustration wasn’t fatigue. I took a moment to try some maths, walked around the servo, all was good.  I called my cousin who had arrived in Cairns that day and offered me some space at his hotel and told him I’d be there about midnight.  I had some minutes to make up and the OA was falling but not yet below 96.

More roadwork, 100k zones, 80k zones, 60k zones cycling over and over and over. I set the cruise for the 100’s and rode the signs. You know, braking hard right on the signs to slow and giving the Harley a roaring fistful to accelerate when the limit went back up and riding right on the limit of lawfulness in all of it. Then flicking the cruise to manage speed and relax the mind in the 100k areas.  Through each cycle I was able to make up a minute or so on the GPS. I wasn’t sure what was happening to the OA.

After Innisfail it opened up slightly, the roadwork stopped, I slipped into a rhythm and relaxed a bit.  I arrived in Cairns, found the Mobil Servo and grabbed a docket, 11.45pm. I stitched my cousin and his mate Smurf up for some signatures and was shown the digs.

It was a small room, two single beds and a tiled floor. $78 bucks a night in the heart of the city. You know the type of place.  My cousin had one bed, Smurf the other and I was shown to the tiled floor and given a pillow and a blanket.  For one reason or another I didn’t sleep too badly in my LD Comforts, thermals and socks.

My missus flew up to Cairns on Friday, I moved to a King Bed with a view of the water on the 14th floor of the Pullman and spent a couple of days with her and 1300 or so HOG mates.  I didn’t ride on Friday though.