Up at 3am this morning for a 4am start at Wallsend. I didn’t have much time to plan today’s ride or pack the bike, it was all done in a rushed hour or so by 8pm last night. Cann River Bakery in Victoria jumped out as a decent spot for lunch and I made a route that would exceed the minimum Iron Butt distance of 1610kms but also spiced the ride up a little bit.

First up it was a dark run down the M1 past Sydney enjoying loping along as the sun rose with my first stop for fuel the BP at Marulan (307kms). I stopped here because it’s usually quicker than Goulburn but that wasn’t to be today. Two phone calls and taking care of business burnt 25 minutes, it’s usually less than 8.

Past Goulburn I stopped for a moment to enjoy the wind farm. 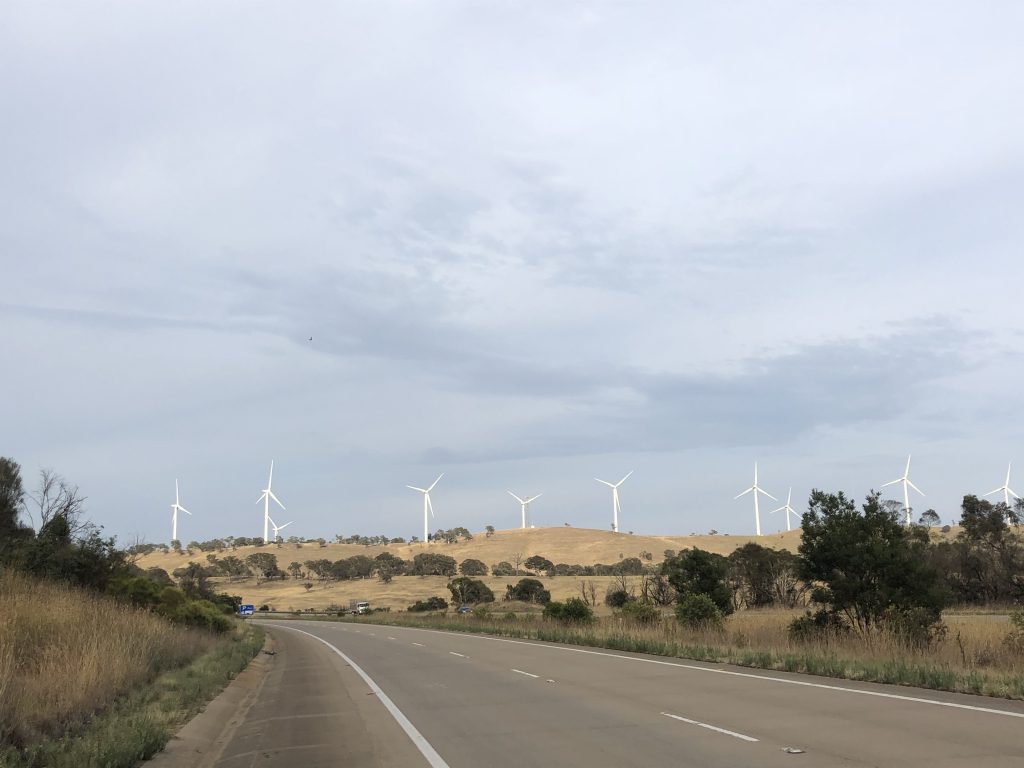 Today I passed by the Dog on the Tuckerbox, almost feeling guilty,  and turned left at South Gundagai towards Tumut where I fuelled up. A short leg but I needed a docket there to prove the route and was hoping that I’d make it to Cann River from there on one tank. 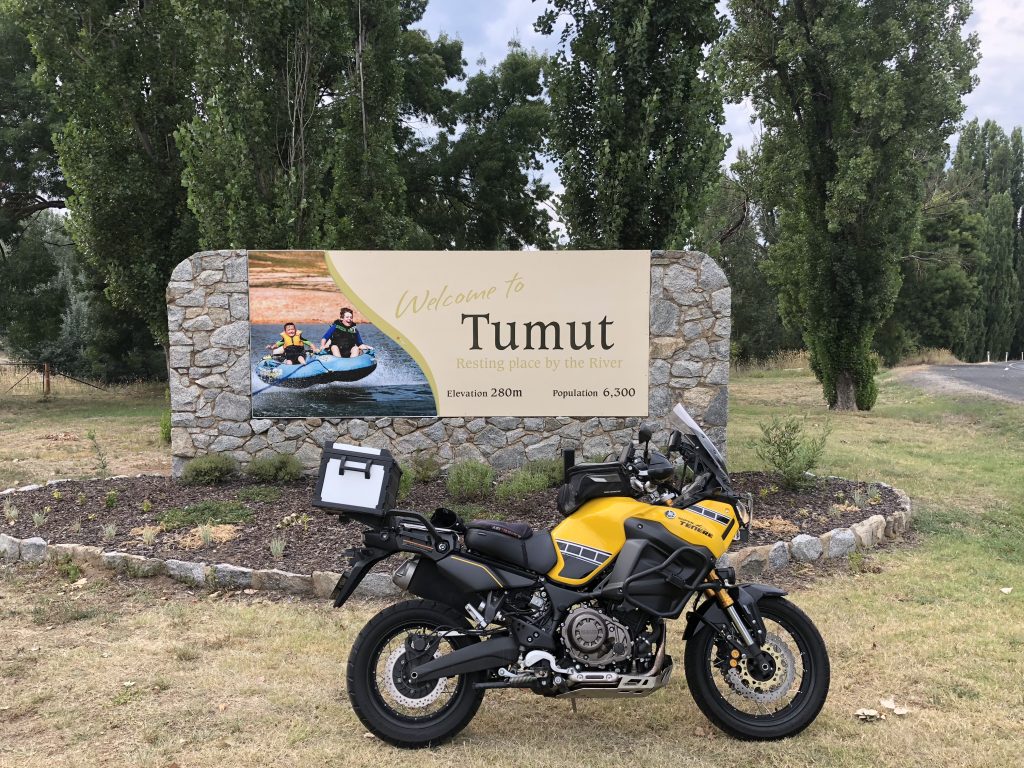 The Snowy Mountains Highway today was ‘roo free but these bright yellow blighters were all over the place. 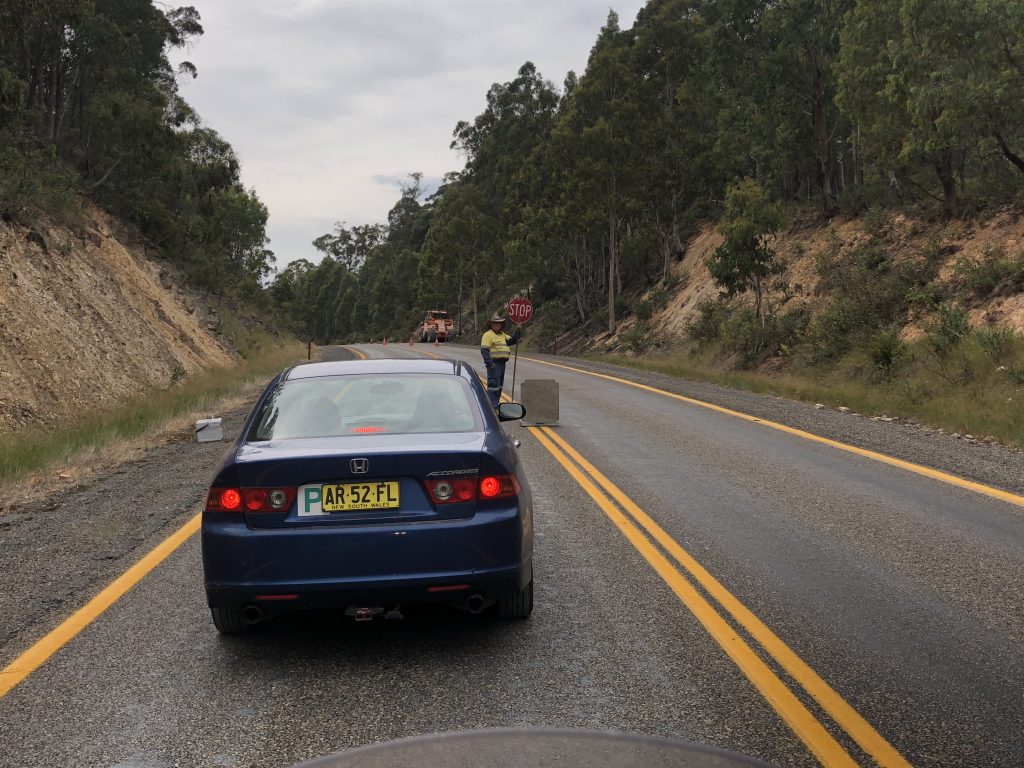 Just as you’d start to get some rhythm another one would jump out at you or just leave you hanging while they hid in the bushes. 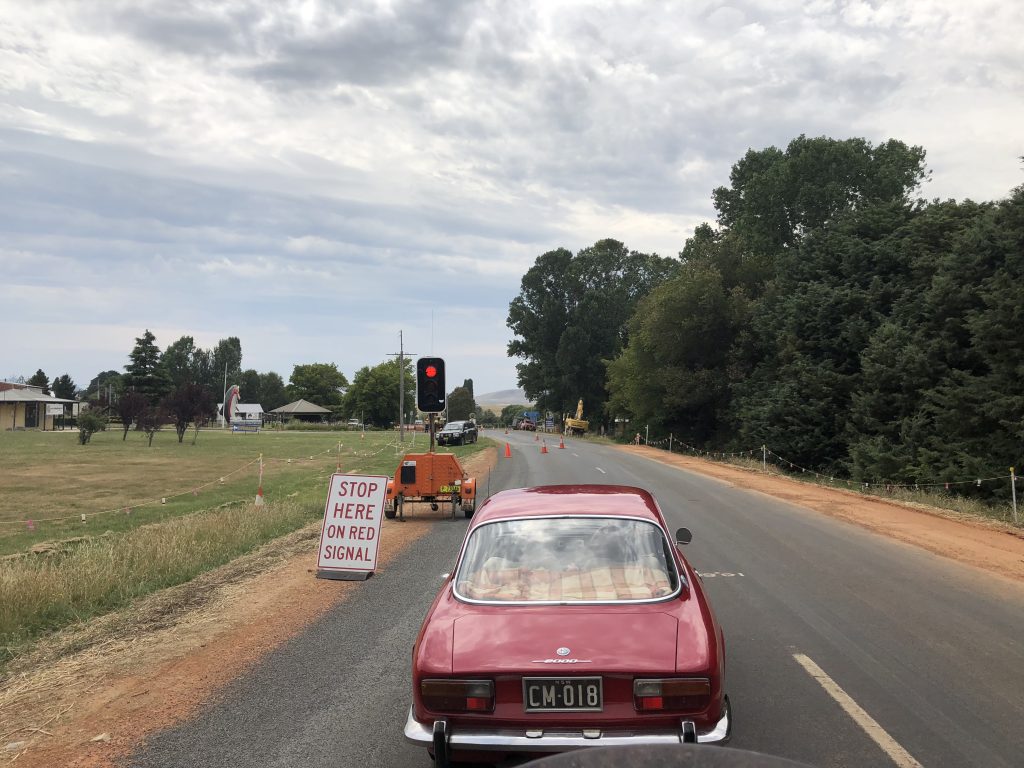 And that one caught me twice because I wanted to get a photo of “Troutlander”. It’s the first time I’ve been past here in daylight in a long time. 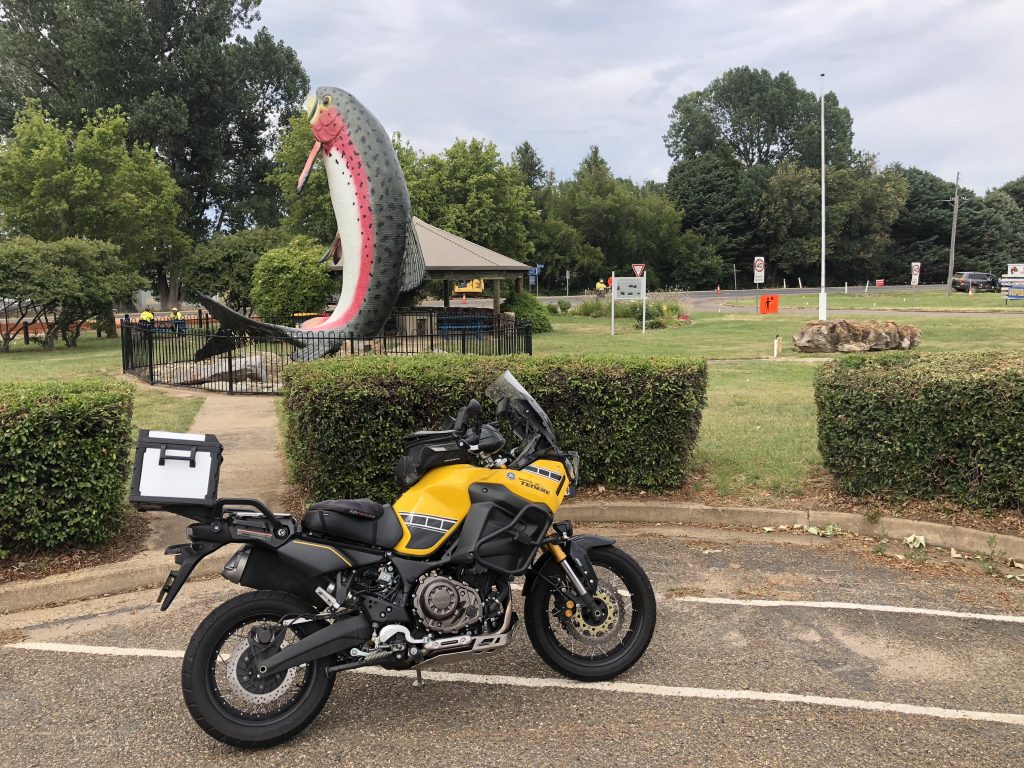 Leaving aside the stopped time issues the weather was cool by recent standards as I wound my way towards Cooma and I was really enjoying the ride.  A right turn keeping to the Snowy Mountains Hwy at Cooma towards Bombala brought me closer to heavier clouds, cooler temps and a sheet of rain in the distance.  The next right turn onto the Monaro Hwy took me into the showers and I happily rode through.  Nothing like evaporation off the Klim suit to drop the temp a few more degrees. Nice!

A left turn just out of Bombala, continuing on the Monaro Hwy, takes you to the sign below which signals the start of a really great piece of road. Back to back 65 – 75kph bends through tall trees all the way to Cann River (903kms).  It’s a shame it’s in Victoria, it’d be nice to add 5kph or so to the real corner speed. 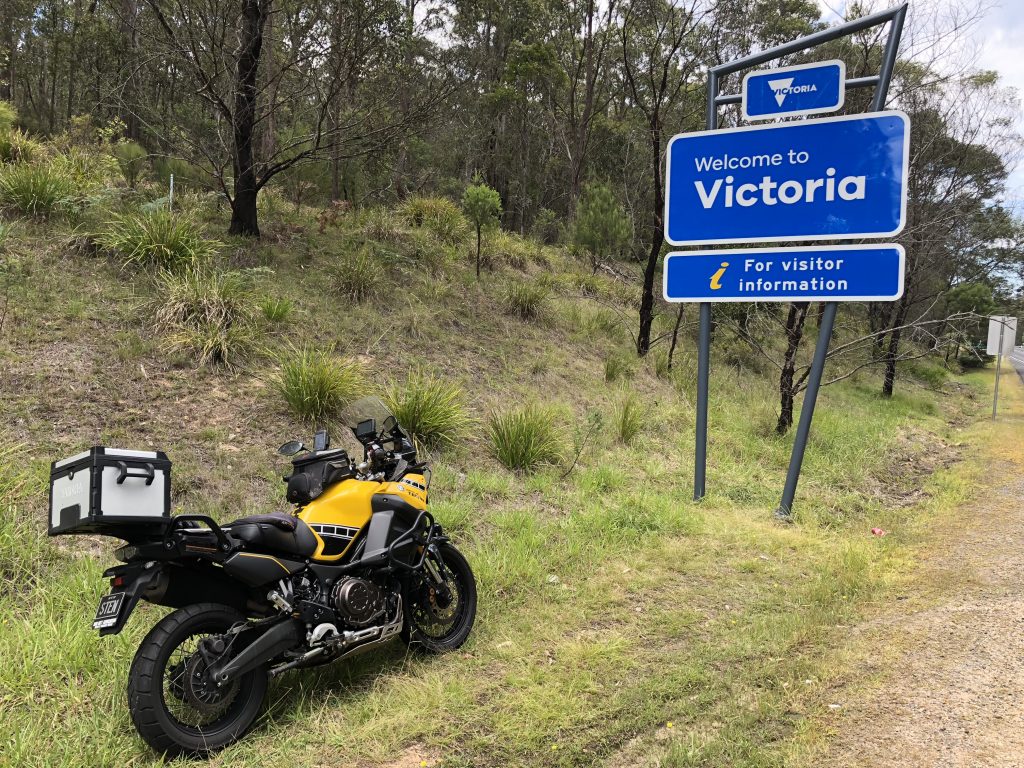 Of note in that region was the inaccuracy of yesterday afternoon’s weather forecast which suggested the cooler temperatures and cloud I found in the mountains would also be present in Cann River. Instead the thermometer jumped sharply to 36 and at one point peaked at 38 degrees.  Luckily the Cann River Bakery is air conditioned. 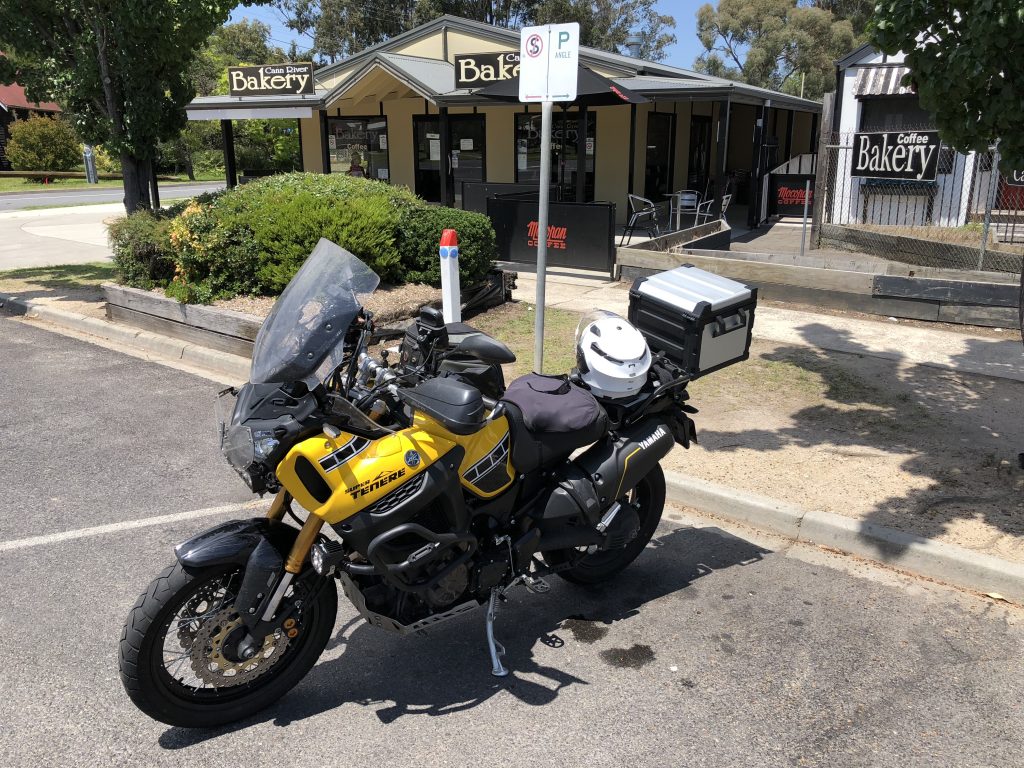 And the pies are square which while you are riding and not listening to music might make you wonder if Archimedes would have bothered with his polygons when calculating pi if pies were all square and didn’t have a complex circumference measurement to consider.  Two r pies please. Whatever keeps you focussed and passes time on the ride I say. Despite their shape they taste great and go well with a Spicy Chai Latte on Soy. Proper biker bakery food!

I grabbed some fuel then it was back north through the bends, breathing a sigh of relief on exiting Victoria unpunished for enjoying myself. For those of you who know the area you’ll note I did a quick U turn on the way out of town to get this pic at Bombala. 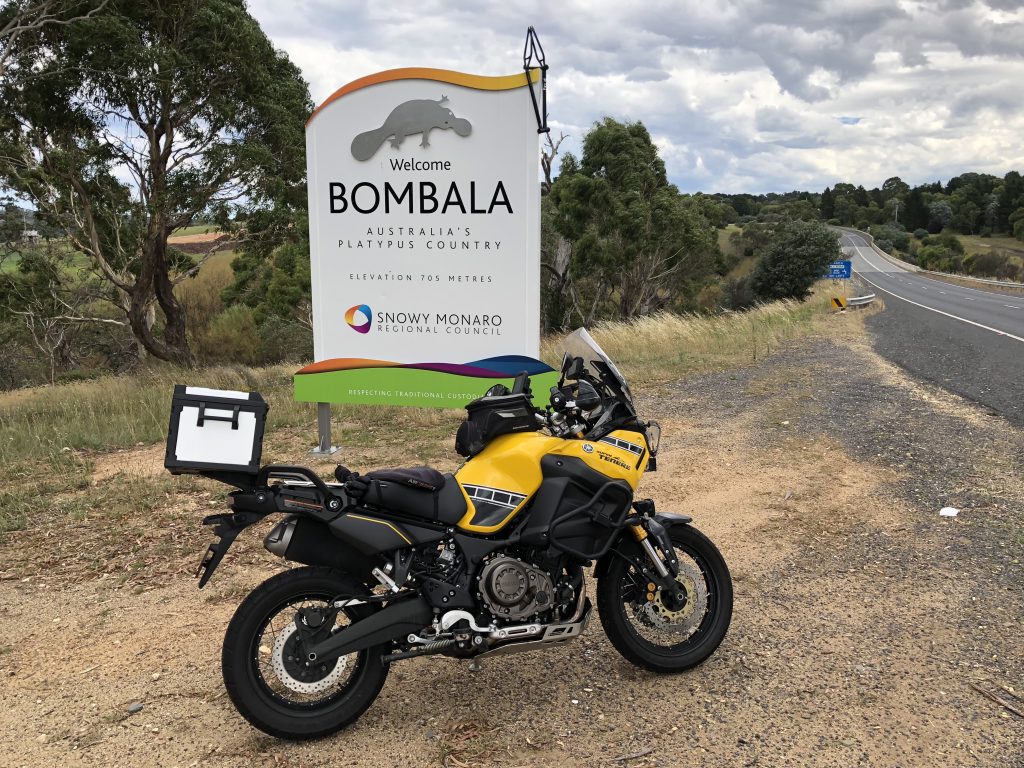 And not too much later I took a moment to enjoy the fantastic scenery between there and Cooma.  The clouds and showers had moved further north east. 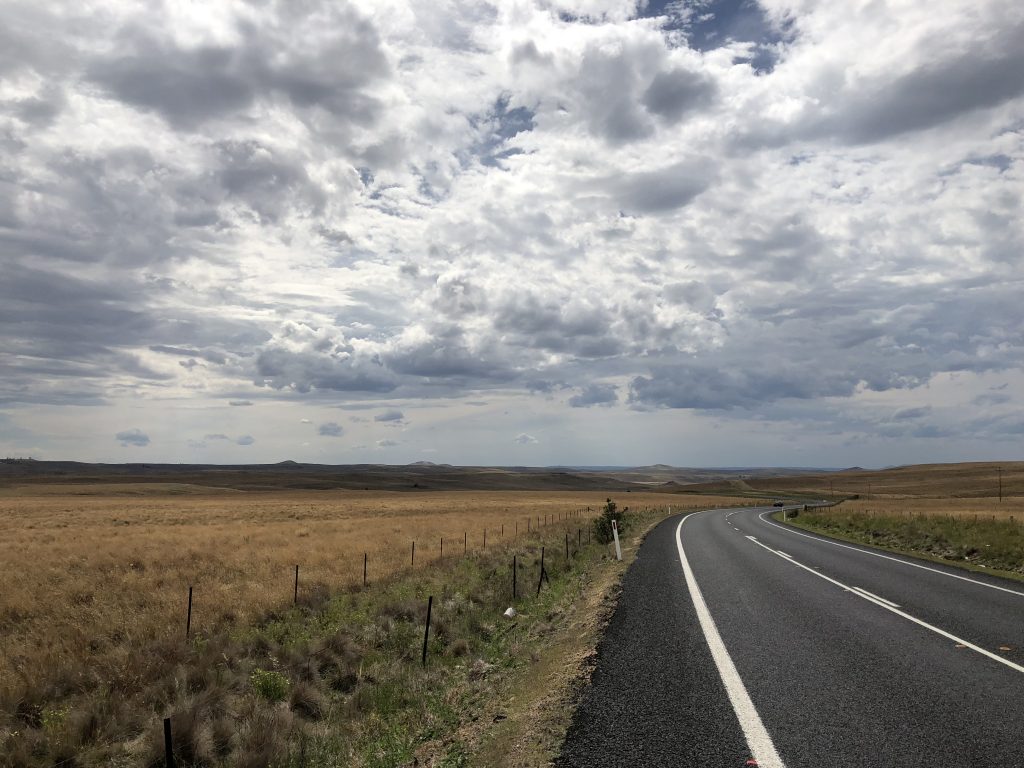 During this part of the ride I was lamenting my stopped time which was already at 1hr 26 for the ride. On a brighter note however the fuel consumption on the Super Tenere was averaging only 4.7l/100kms. I ran the numbers and I realised I had a shot a getting to Goulburn.  These are the things that come to mind when you’ve done insufficient ride planning. It did mean that only one stop might be required for the 714km run home from Cann River. That’s all it takes to get the head back in the game. Sadly it meant I rode straight past the great little bakery at Nimmitabel (round pies I recall).

The ride through the Australian Capital Territory was reasonably smooth except for the last section before turning to Goulburn where I struck the PM gridlock. Fortunately most of the drivers were supportive of lane filtering and I made my way through that without too much delay.

I made it to Goulburn (1274kms) on reserve, nice! I decided to fill up and grab a bite to eat at Subway which was empty as I pushed my bike towards it. Trappers Bakery was across the road but it would burn time moving the bike twice.  Rob Macpherson will no doubt be able to help me out with the shape of the pies there. Sadly the stop at Goulburn wasn’t a good one (26 minutes). As I was parking the Super Tenere the Addams family drove up, piled out of their minibus and filled the previously empty Subway counter before I could get inside. I thought briefly about bailing and heading off but calorie deficits and riding aren’t worth the risk.  Just one of those days!

It was a cruisy ride home from there. The sun set, not requiring a stop because I changed to my night glasses at Goulburn. There were patches of roadwork here and there, including the long 80kph stretch on the Central Coast but I was just kicked back letting the world roll past.  The finish docket at Lambton was stamped 21:54.  And of course knocking over another IBA ride means the best reward ever! 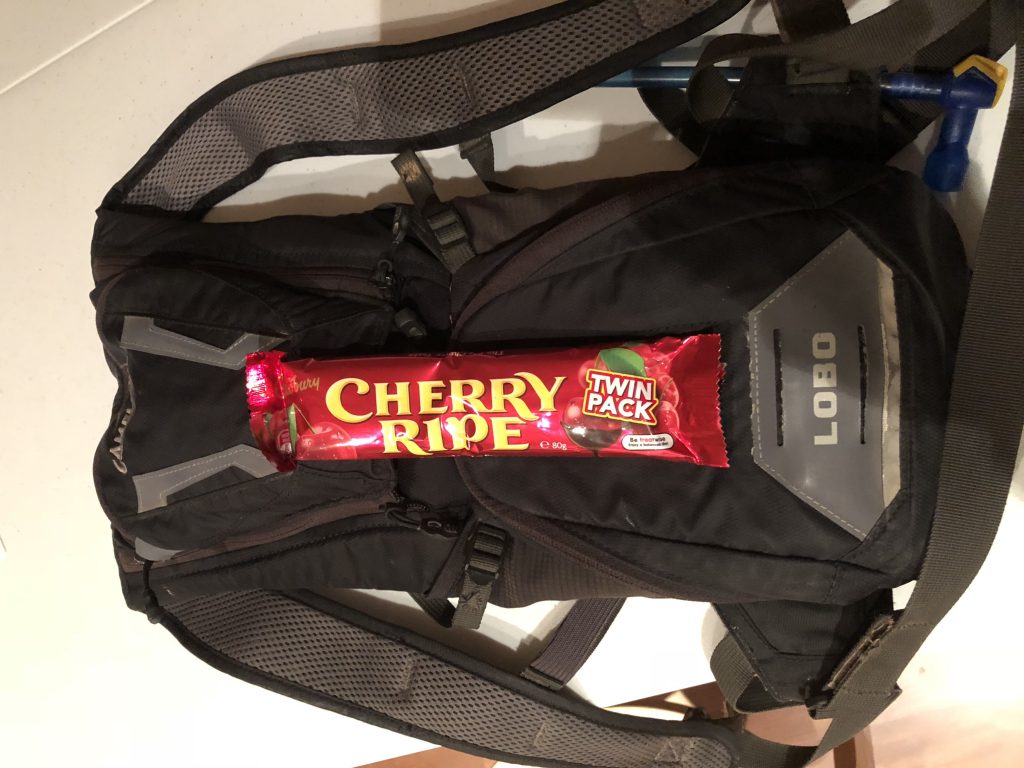 My missus reckons I should just buy a stunt Cherry Ripe and recycle it for photos, but what would be the point of that!

All in all a pleasant day out on the Super Tenere and good practice for whatever more challenging rides might lie ahead.