It’s been just over 4 years since my first IBA ride.  Today was my 40th “standalone” ride. It’s possible to get multiple IBA certifications in one ride, for example, my recent 50CC from Melbourne to Darwin with the Centreline 24 nested in it resulted in two certifications. But from the IBA perspective where any kilometres overlap it counts as one ride toward any Mile Eater program level. 40 distinct rides, including 10 Gold Insanity or greater than 48 hour rides, gets you to Platinum Mile Eater level.  It’s not scientology, it’s just a goal.

Up at 3am, SWMBO is well used to the ride preparation and paperwork routine, and I was out the door for a 3.50am start docket from the local servo.  Today was my first IBA ride on my KTM 1290 Super Adventure.  Other than a GPS, Etrex, SPOT, tank bag and Airhawk the bike is stock. So no music. coms and most notably no auxiliary lighting.  This meant the route, finalised at 8pm list night, as far as possible would see me out of skippy country while the sun was down. The stock lights on the 1290SA are well suited for Adventure Riders who don’t ride after dark. I’d also pencilled in some locations to take pics along the way just for a bit of fun.

With that in mind the first leg was a transport leg to Port Macquarie proper for a ‘P’. 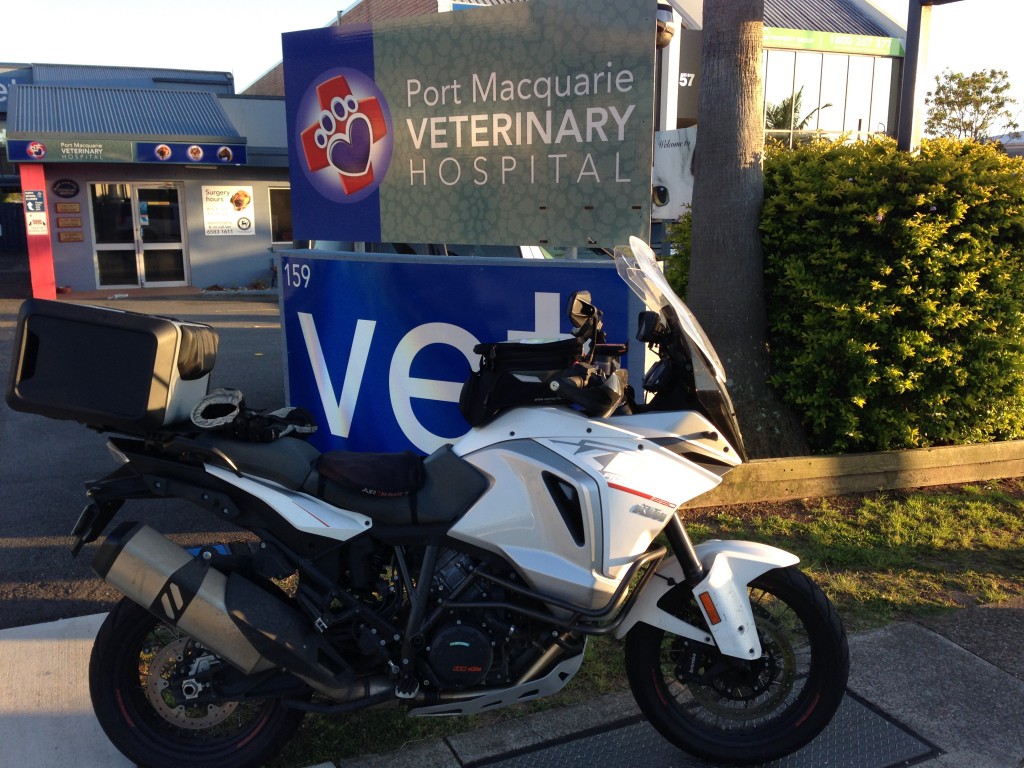 I filled up in town for a corner docket then it was time to have some fun on an east west run up the Oxley, but not before I picked up an ‘L’ at Long Flat. 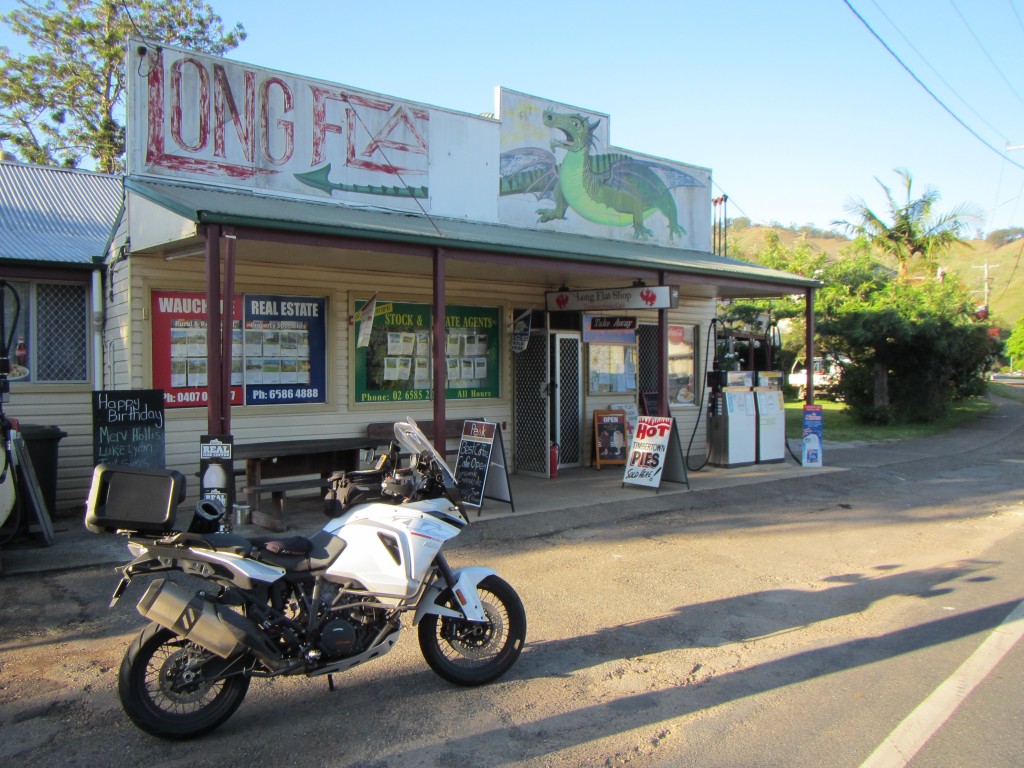 It was a sensational morning and a nice clear run so I took the opportunity to dial in my cornering skills on the bike for the first of a number of cornering frenzies today. I still wasn’t quite used to the high revving V twin but once I found the gear it likes to sing in, well, you know what happens then….”Beelzebub has a devil put aside for me, for me, for me……” 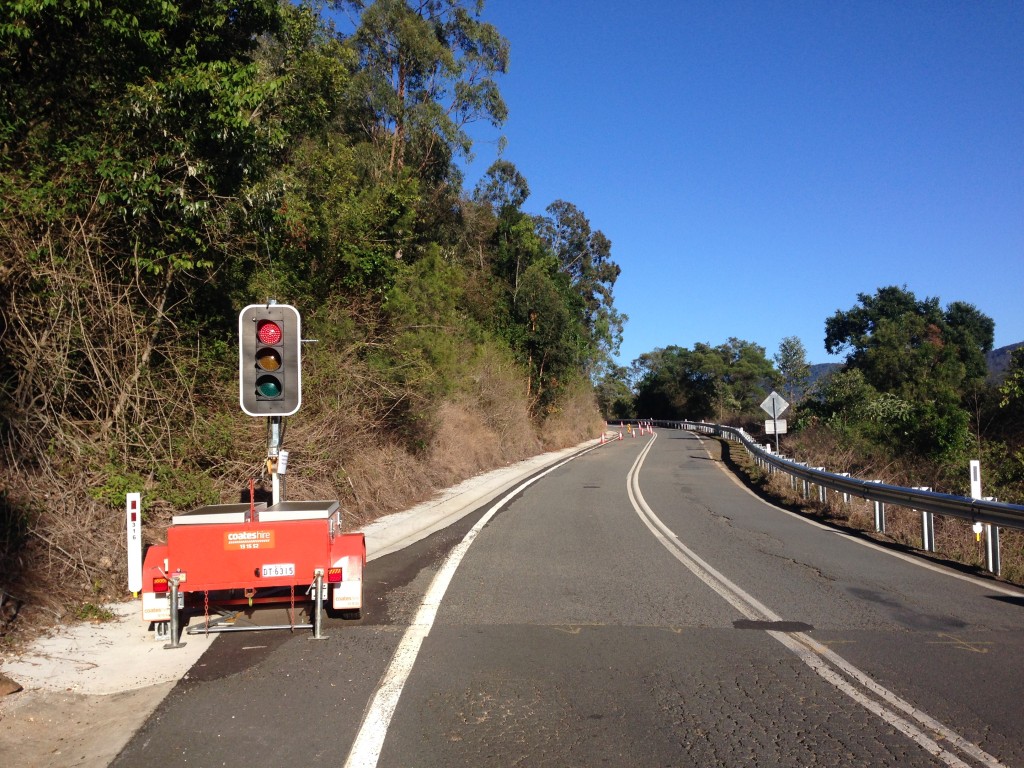 After Ginger’s Creek I got caught behind a Uhaul ute towing a trailer for a short time.  This – I have the word but don’t want to type it – thought it was perfectly OK to completely cut blind right hand bends and be completely on the wrong side of the road to flog his stupid little hired truck and pretend he was a superhero.  It infuriates me when I see this sort of lunacy, there should be an “attempted attempted murder” charge for this type of knobhead.  I passed him on a straight piece of road and showed him the rude finger and then the little finger wobble that was popular on the TV a while back.  Childish I know but I can’t use my words in a helmet.

Adrenalin settled, I took a little break and secured an ‘A’ at Apsley Falls 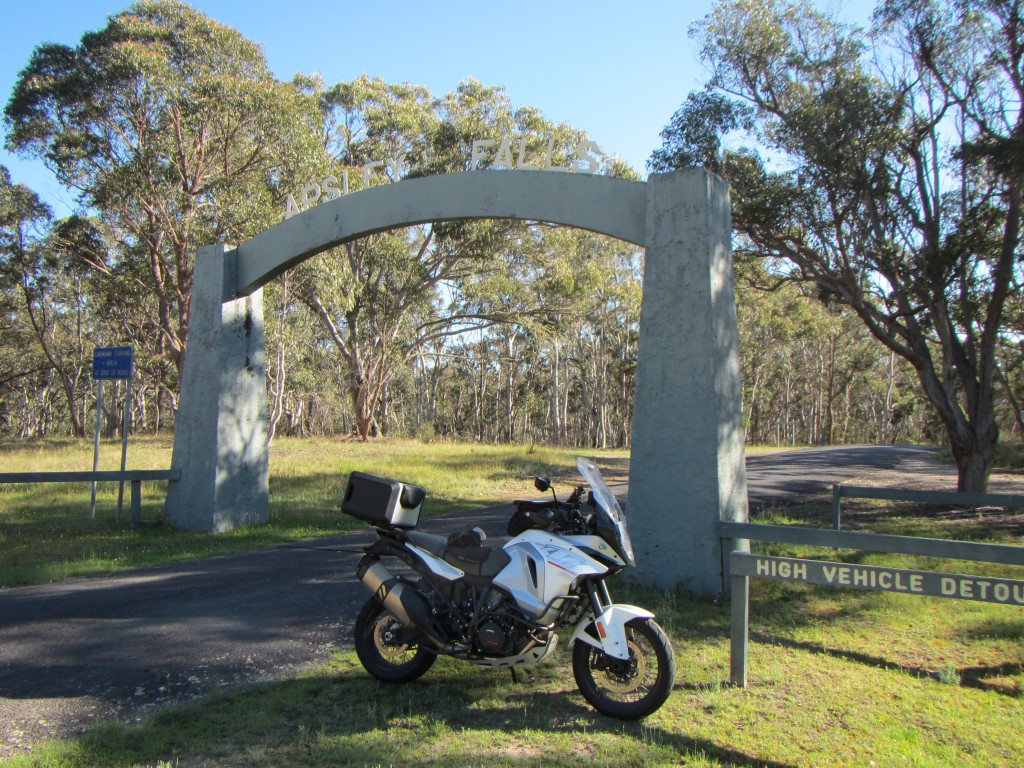 Then rode through Walcha, Uralla and up Thunderbolts Way towards Bundarra.  I was on this road a couple of weeks back heading south on my way home from FarRide #37 in Texas. I quite like getting both perspectives on beautiful countryside.  I took a little detour into Tingha for a ‘T’ break.  What a funny little town that one is! 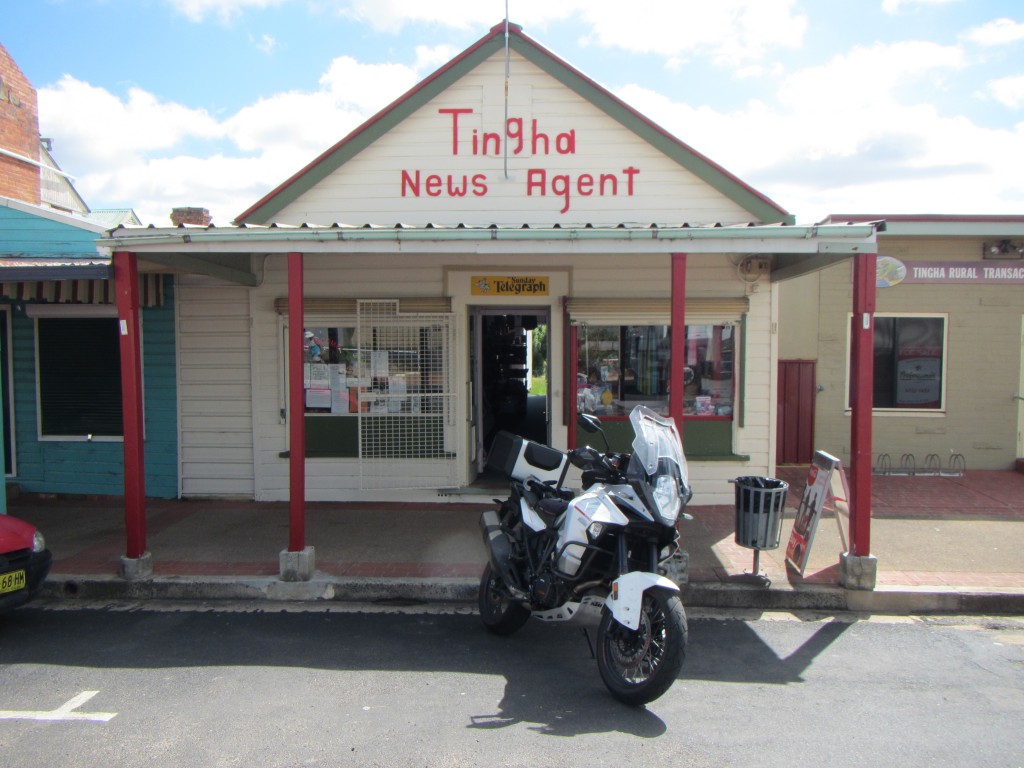 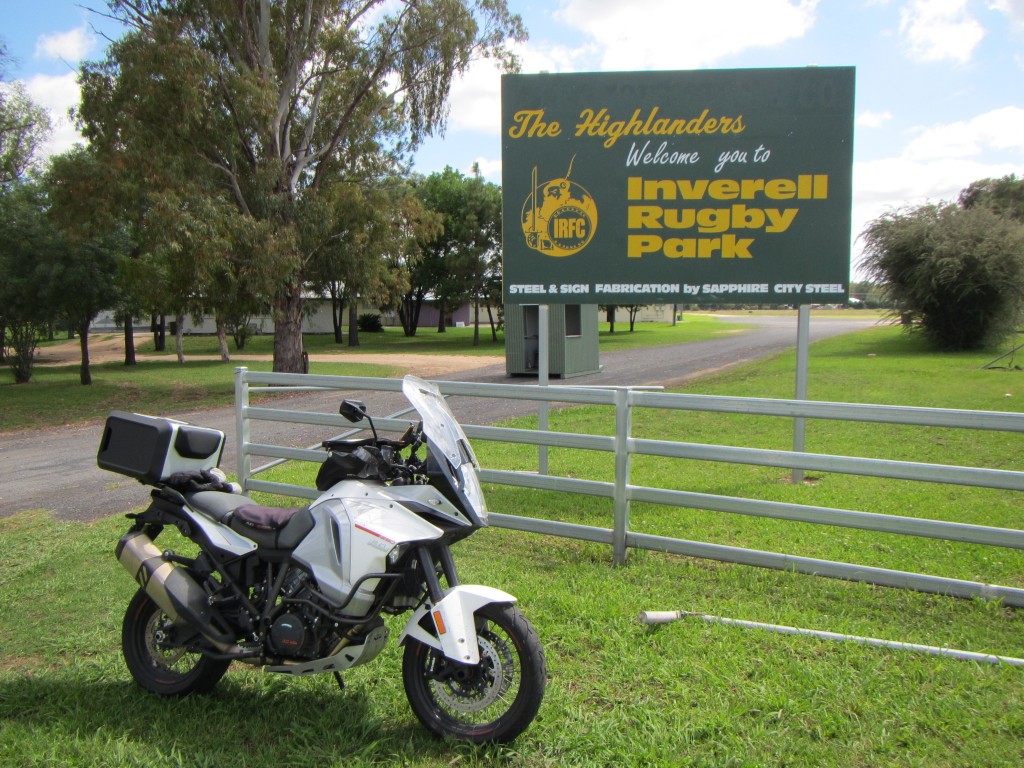 I fuelled up at Inverell 20.27 litres for the 369kms (odo) from Port Macquarie, about 18.2 km/l of proper riding, one up unloaded. Speaks to a pretty good range from the 30 litres onboard the KTM. From Inverell it was time to spread the route out to make it long enough for the SS1600k so I kept going north through Ashford (God’s Own Country) towards Bonshaw and turned right onto the Bruxner Hwy.  I have never been on this stretch of the Bruxner before. I only saw three other vehicles between there and Tenterfield so I took some time to enjoy the scenery and the corners as it meandered beside the river. 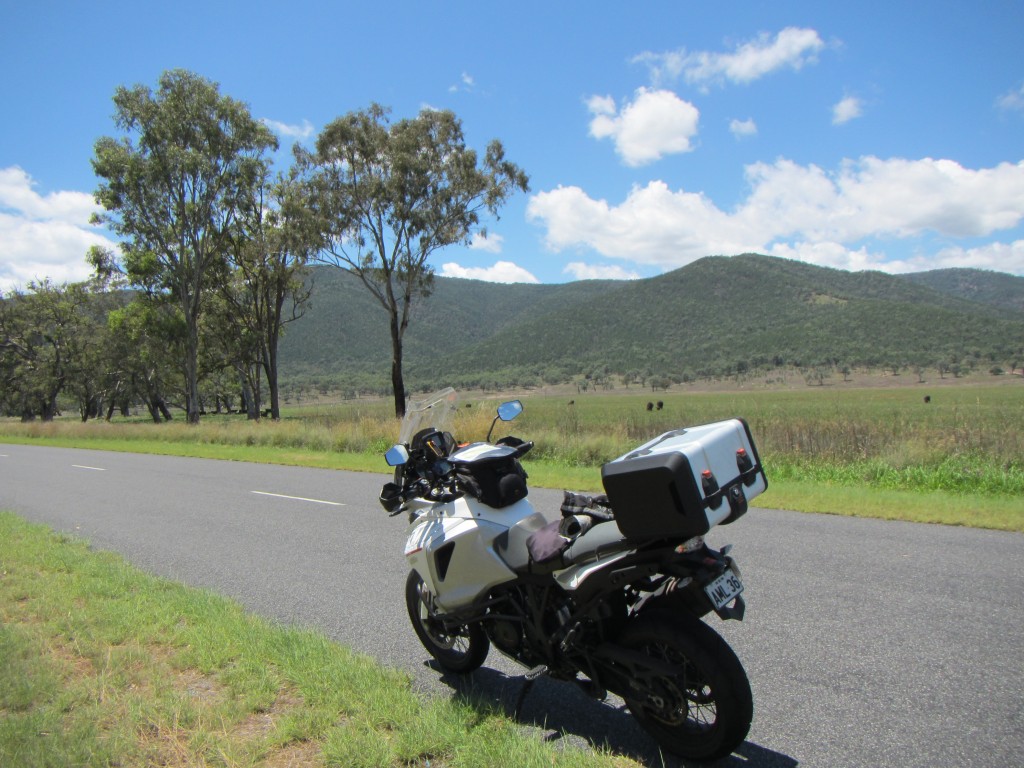 I made a quick stop for a docket and iced coffee at Tenterfield before sticking with the Bruxner heading east.  Just before the really fun part of the Bruxner through the Girard State Forest I caught up with a guy on a very nice looking sports bike.  I’ve got no idea what it was, unless they have Repsol colours they all look the same to me, but as he passed some traffic I followed him and quickly got the impression he knew the road quite well. So I decided to sit back, follow him and enjoy the run, I was warmed up :-).  Gee those sports bikes lean over a long way, I’d be terrified if the KTM did that!

At Drake, not surprisingly, he turned to go back the way he’d come to find more glory on the edge of his tyres.  If it’s possible to do a wry wave, we gave one to each other and went our separate ways.  Heading towards Casino I caught up with a guy on a Soft Tail  who was with two others, one on a big Victory Cruiser and the other on an ST1300.  I decided not to sit behind them although they weren’t holding traffic up I had an OA to maintain.  They took the opportunity with me in front to improve theirs. The day was warming up, breaking into the 30’s so at Casino I took off the neck warmer and opened a couple of vents in the KLIM suit by the side of the road.  I was glad I had the Camelbak on today too, the importance of hydration can’t be understated.

My original plan was to get fuel at Casino however I wasn’t close to needing it so “on the fly” decided not to. But, as you do when you change plans, some doubt crept in about proving the route without the docket at Casino. Was there a quicker way to Grafton from Tenterfield than through Casino?  I had no clue and wasn’t going to risk it.  So I stopped at Whiporie for a cool drink and a docket, I wasn’t game to try the fuel. 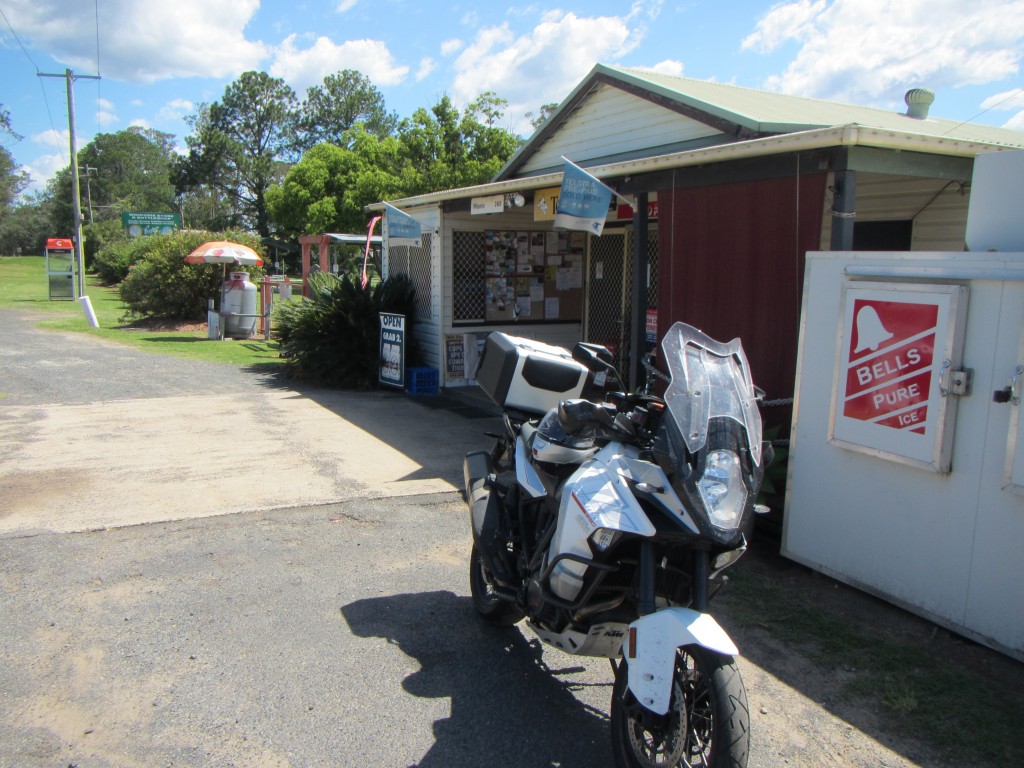 I enjoyed the cool drink but counselled myself sternly for making a mistake like this.  While I wasn’t short of time for the ride I hate wasting it.  Much care needs to be taken on circular routes and there’s no reason to add stress into the equation while you are riding. There’s enough to think about on a ride like this. Amateur!

I filled up at Grafton and took a short break from the heat in the servo aircon. Then it was time for the next cornering rampage up the Old Grafton Road towards Ebor.  This was the second time recently I’ve been on this road, the first time in this direction. It’s a cracker but a bit narrow in parts so some care is required.

I stopped at Nymboida to collect an ‘N’ 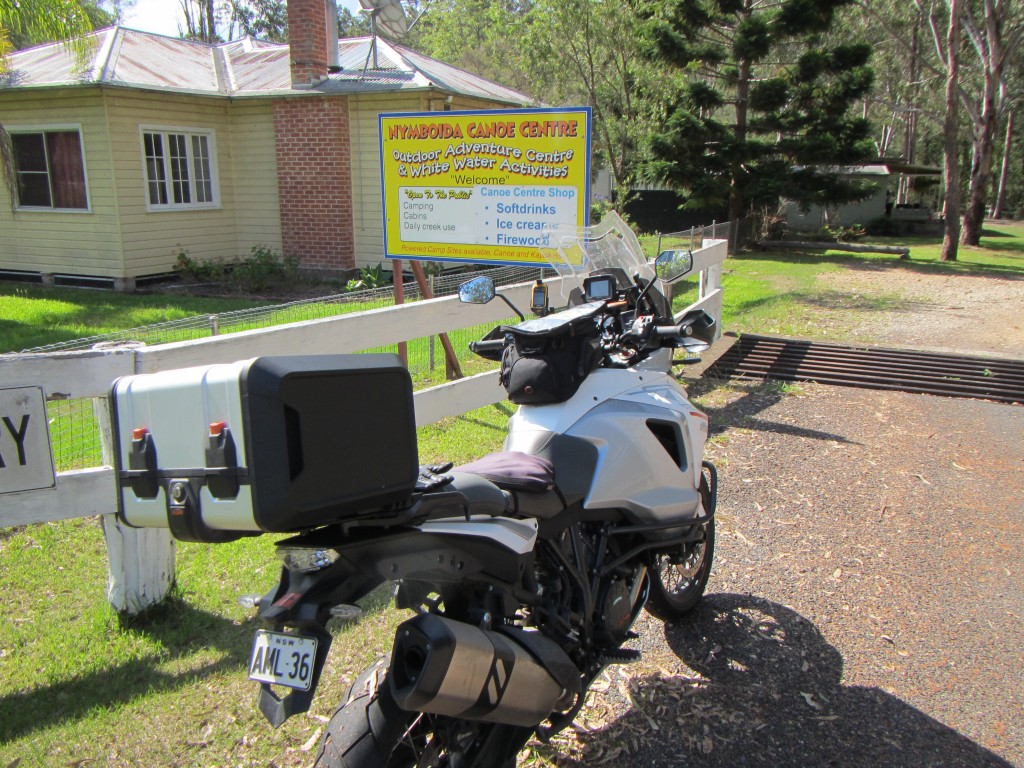 A quick check of the phone here revealed some messages from FarRiders concerned for my welfare because the SPOT had gone off the air for a while.  I was without signal at the time so I made a mental note to let people know I was OK. It’s great to know that in this solitary sport that people are looking out for you. Thanks guys.

Then I found out they are resealing the whole road through town at Ebor. 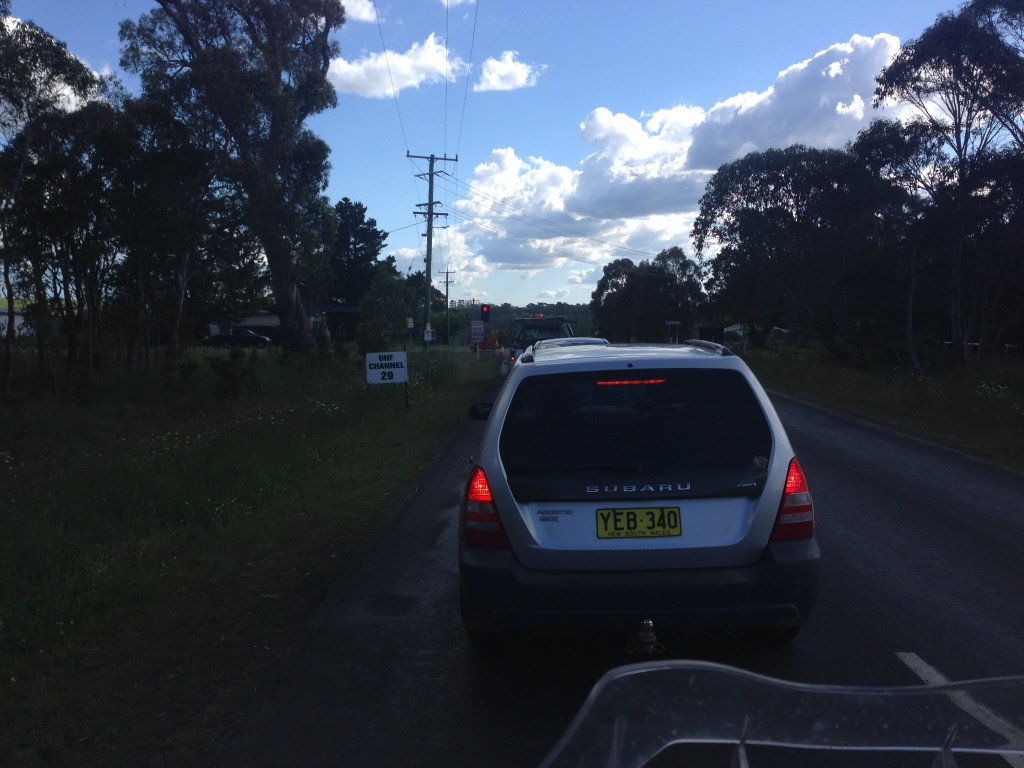 Once past that I rode Waterfall Way towards Armidale (where I sent an SMS to check in OK) then turned left on the New England Hwy towards Uralla for the ‘U” and some fuel.  Yes, I know I’d already been through there during the morning but I wasn’t up to ‘U’ then so there wouldn’t have been any point taking a photo, would there? And U’s in general are are a bit hard to find so I had to go back. I hope it’s not OCD! 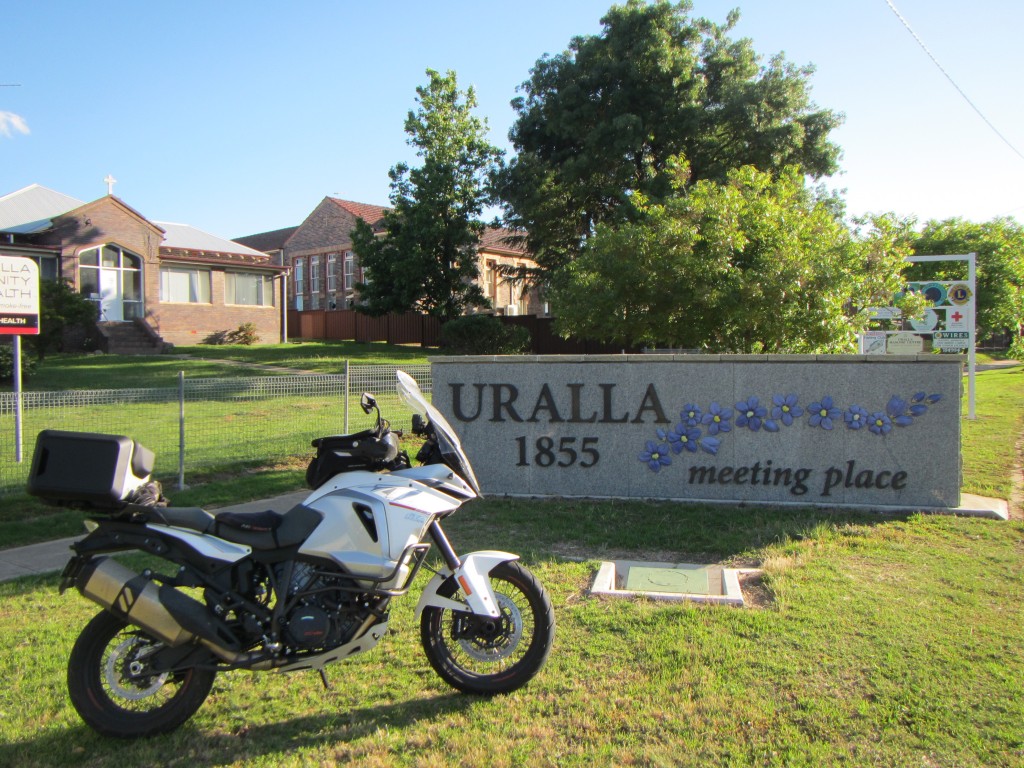 The good thing about Uralla is that there’s three ways home. The New England if you are tired, Thunderbolts Way for some rural fun and games or back down the Oxley.  Sadly for me the kilometre requirement for the day meant I’d need to ride the Oxley again, YES! And if my plan and timing were right I had just enough daylight left to conquer it without having to ride completely blind with a combination of the KTM’s headlight and the obliteration it would receive from the legendary early evening Oxley bug storms.

To further facilitate this I didn’t stop for fuel at Wauchope. It wasn’t required for a corner and I’d decided I might make it home on what I had onboard based on the surprising economy the bike was giving me. There was a bit more traffic on the mountains this trip but not enough to cause any real delays.  Most were polite enough to make room for me to pass, the others I just passed.  The 160 horses in the LC8 make short work of pretty much anything. Of course I got to see the other end of this setup I’d met this morning 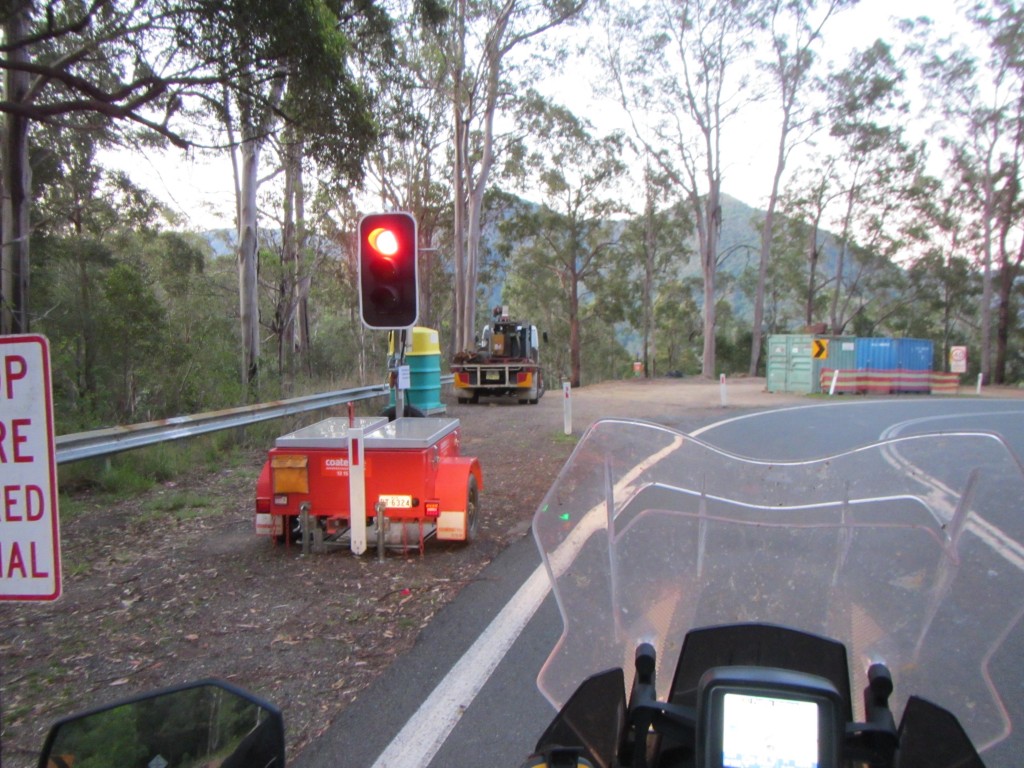 I was out of the bends heading towards Long Flat by the time the sun disappeared behind me and the bugs came out in force and gave me a real peppering.  I was reminded of a time I rode this road at this time of the evening with JP on our Harleys.  JP back then thought open faced helmets were cool.  I thought the caked on bugs that fell off his forehead when he took his helmet off were just funny. The ones in his teeth made me feel just a little bit squeamish.

I rode to Wauchope, my original plan was to take Bago Road and stop at Taree, but I could barely see and needed some food so I kept going to the Macas on the Port Macquarie Donut.  I took to the headlight and my helmet (still on) with a squeegee at the servo, a nice man even offered to help but I was all good. Then I rode next door and settled in for some real fake McChicken, a flat white and called home to update Mrs Wom.

I hadn’t managed to get an M in my plan to finish off the word. I thought that McDonalds was a famous M so I grabbed a pic…  I have to admit that at this point I was really feeling the results of the added exertion of a no frills, very physical approach to the less straight areas of the ride so far so I was happy to take an easy option. 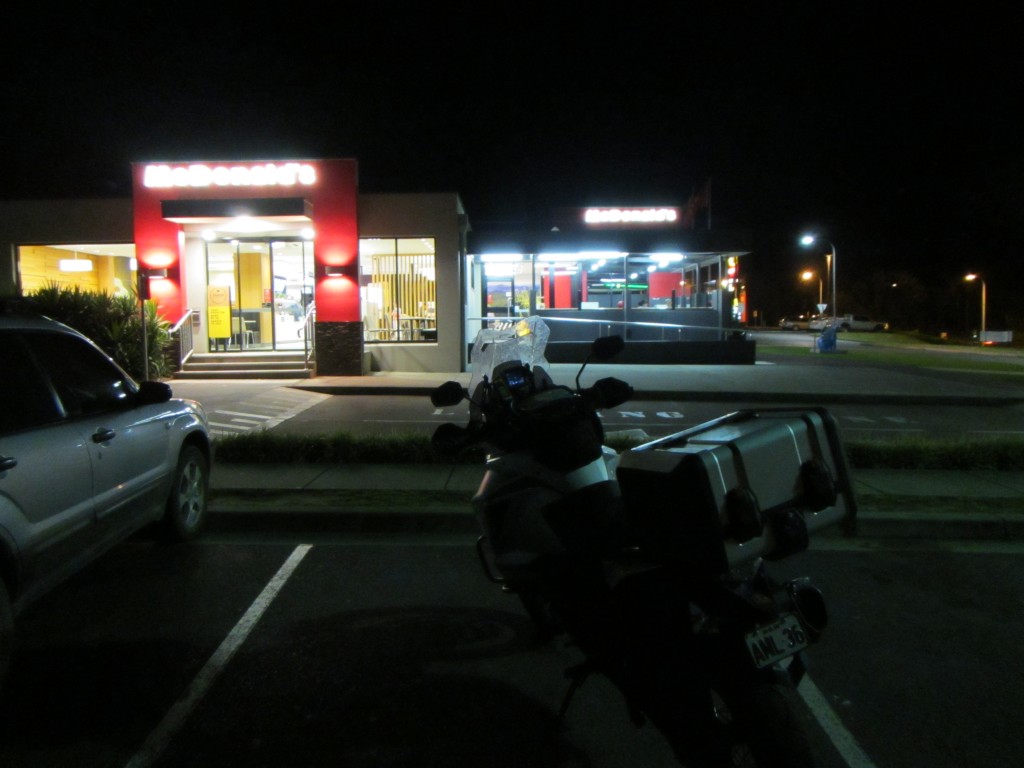 And then riding home it cam to me that a photo at Macas was a pretty sloppy way to finish of the ride after all that effort so I took a small last-minute detour to do the job properly. Definitely OCD. 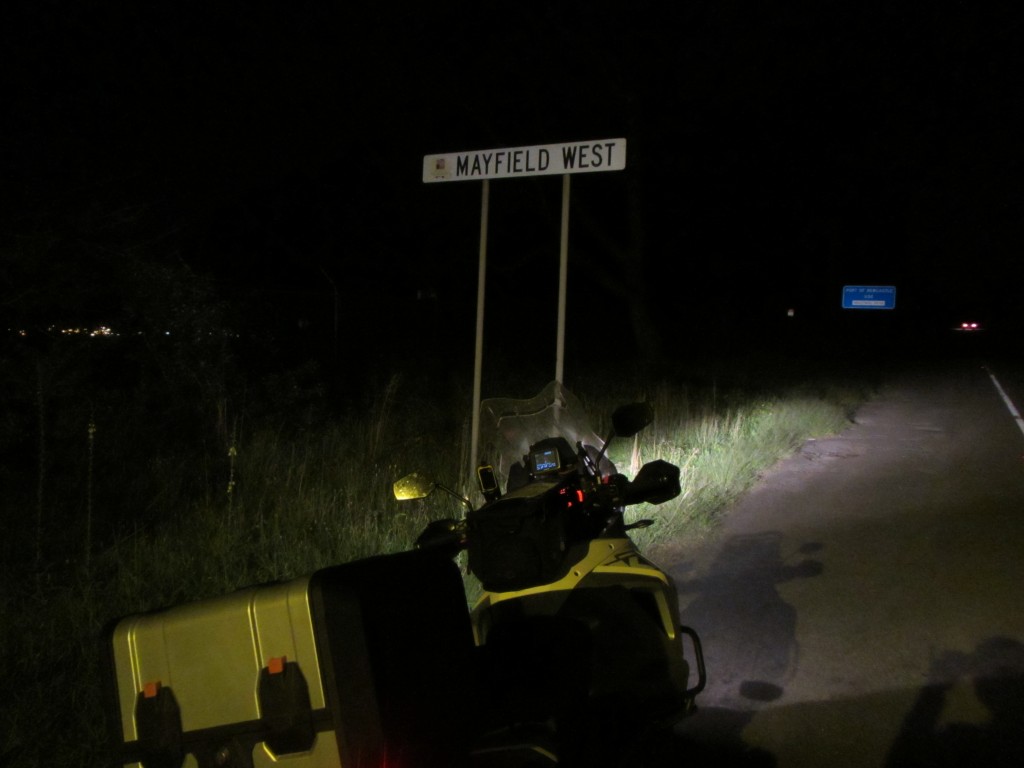 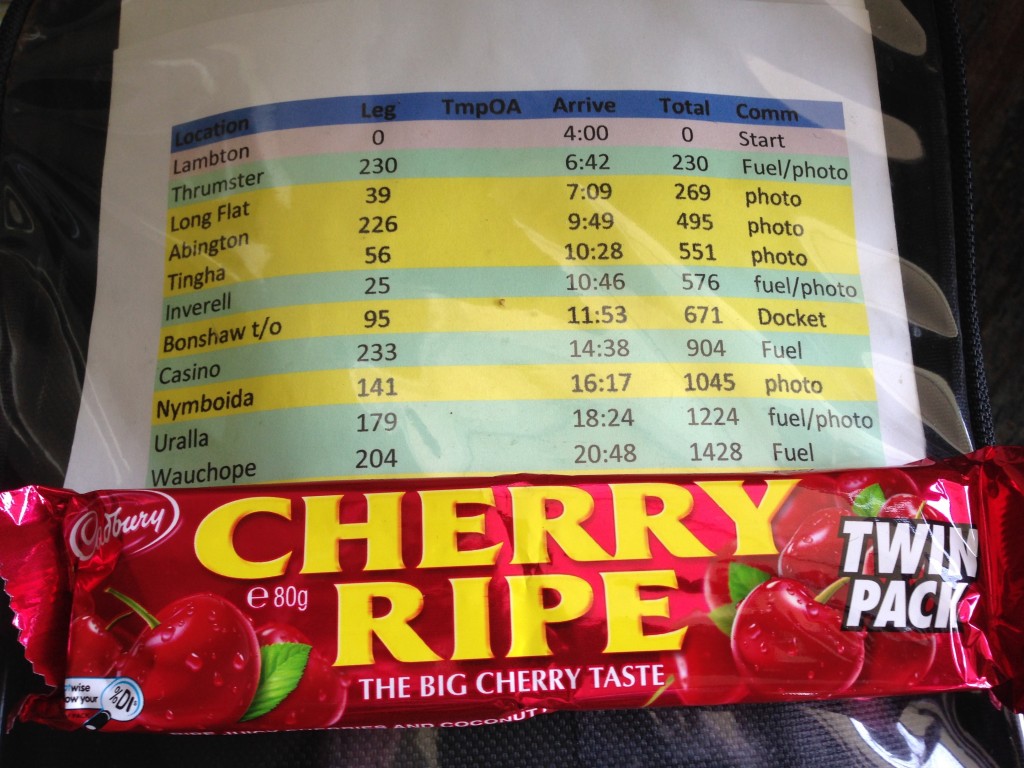 Back on the fuel consumption for a sec, the Uralla – Port Macquarie – Lambton leg was 458kms (odo) for 23.55litres (19.4 km/l) which for a rampaging 1300cc beast is pretty impressive IMHO, even if it was downhill!

The Etrex tells me the trip was 1693kms with an OA of 86.8kph. I was stopped all up for 1:56 which was 20 minutes longer than I would normally but the extra time for photos etc was factored into the ride plan.  All up I was five minutes late (remember Casino/Whiporie).

So there it is,  IBA ride No. 40 for PLATINUM on a bike that’s really almost perfectly suited for a ride like this.  A great day out with a bit of everything but lots and lots and lots of great scenery that passed me by while I was looking through apexes. 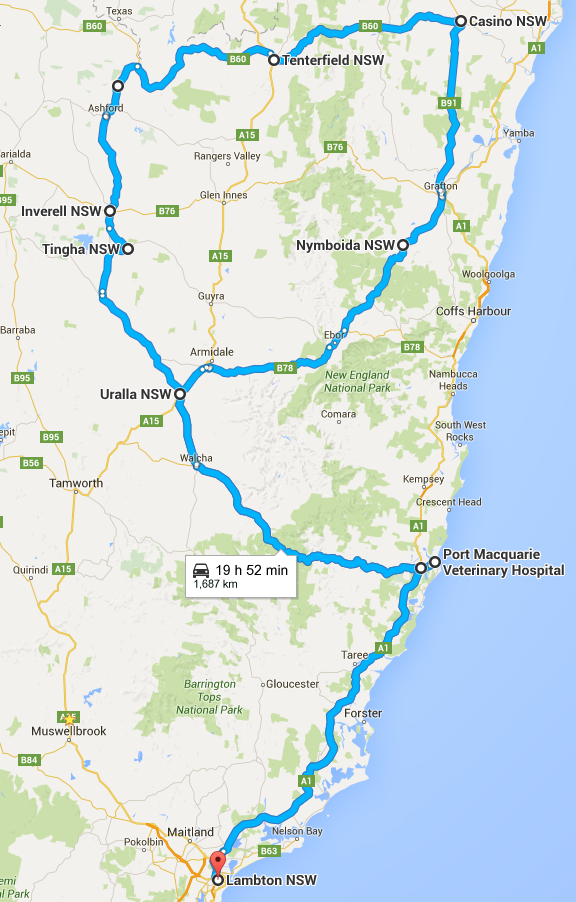