At 1.15am (eastern time) this morning in Perth on my Super Tenere I finished what’s known in International Iron Butt Association circles as an Australian 50CC Gold.  What this means is a ride from Coast to Coast, starting on the east coast between Sydney and Brisbane and finishing in Fremantle, on the west coast.  It can be done in the other direction, it has to be completed in less than 50 hours including stops. It’s a shade under 4000kms from my start location, Newcastle NSW.

My recent rides through the Victorian Alps, to Tasmania and to North Queensland have all been warm up rides for the 50CC. An opportunity presented itself on short notice to ride with a Dubbo based FarRider so my plans were moved forward and we left at 3.30am Thursday morning, eastern time. Here’s the story.

Day 1:  3 January 2013
Just after 3am Thursday morning my wife and I arrived at the 24hr BP in Newy and I met FarRider Skidoooo for the first time.  After a quick chat, some photos by a friend and some witness documentation signed we were on our way.  I led out of town and about East Maitland I decided to test my just fixed LED light bar and the new aux LED’s and they lasted about a tenth of a second… Insert profanity here… Luckily Skidoooo had some very nice HID’s and was happy to be the headlight.

Once out of the boring New England we made reasonable time through Denman, Jerry’s Plains, Merriwa and beyond with not too much wildlife about except a closeish call with a mob of sheep on the road that I believe saw Skidoooo’s rear wheel lift from the braking. First fuel stop was Gilgandra and at that point it became clear that Skidoooo’s GTR had better fuel economy and better range than my Super Tenere which would mean more fuel stops than he was planning.  I was concerned that I would slow him down because of that. A concern that was unnecessary.

We settled into a bit of a rhythm on the way to Cobar where we fuelled up again.   I needed to get fuel again at Wilcannia because it touch and go that I’d make it to Broken Hill with the onboard and the 10l jerry.  The day was really heating up, by the time we got to Broken Hill we both needed a break in the shade before we continued on to South Australia. 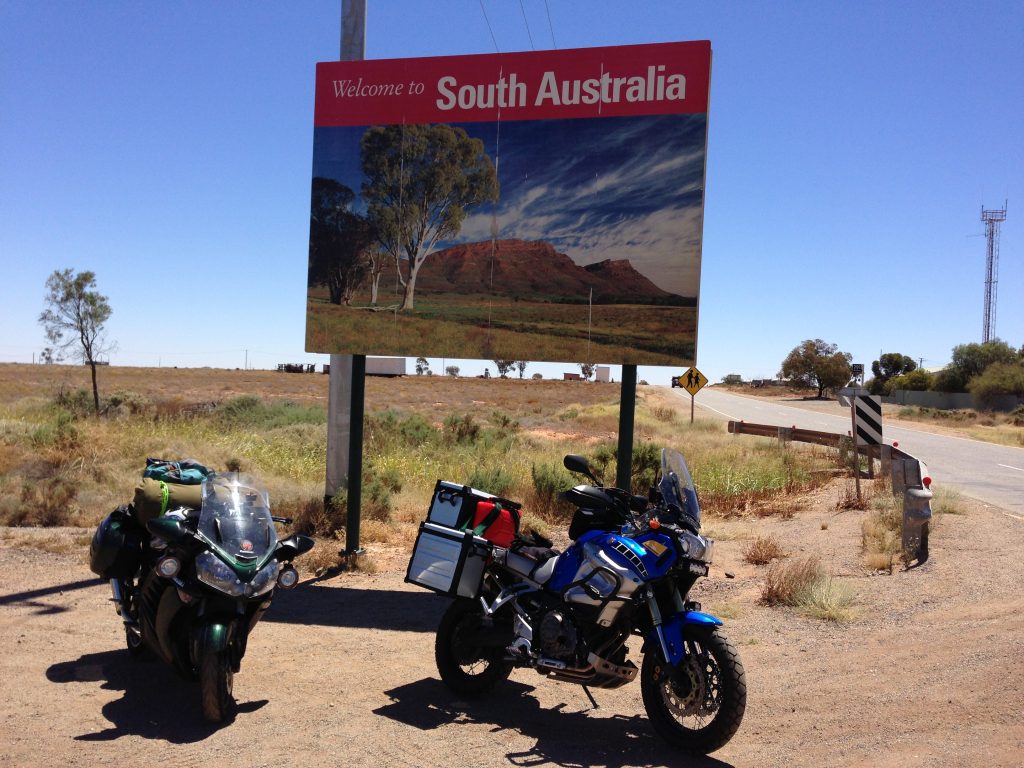 Although Skidoooo could likely have made it through to Port Augusta I would need a jerry stop. But as it happened we really had to take some time at Yunta to sit in the aircon and cool down so we fuelled up there anyway. The temp was already in the low 40’s.  Between Yunta and Wilmington it really got warm, melted tar abundant but it wasn’t hot enough to stop either of us having a bit of fun down Horrocks Pass and to take a photo back up the pass. 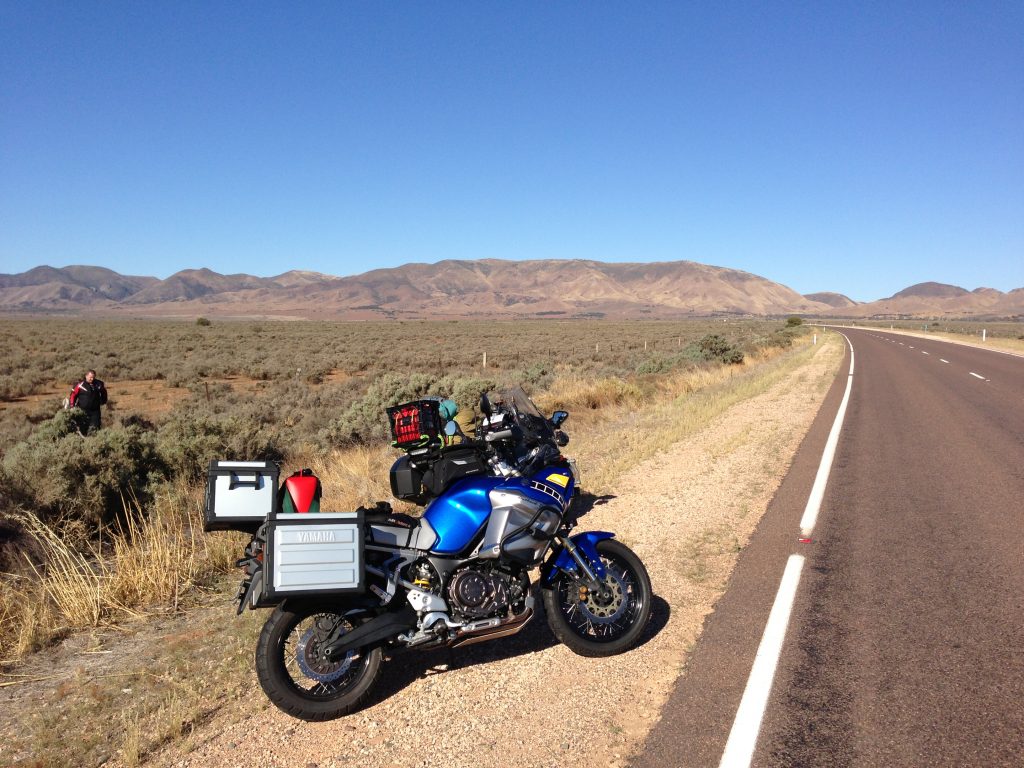 Next fuel at Port Augusta, the temp gauge on the Super Tenere told me that the Air Temp was 45 degrees so after another big drink standing in the servo shop it was time to keep going.  It was getting late and I was hoping we could get a splash of fuel at Kimba or Wudinna so I didn’t have to rely on the jerry only to get us to Ceduna. We pulled in at Kimba at 8.05pm, I took off the tank bag, put the nozzle in the tank and waited.  Nothing happened, they were shut.

I was cross to say the least, time wasted in this type of ride can make the difference between failure and success.  We left after another drink and after doing some sums. At that point I was happy that with a jerry stop I’d make it to Ceduna.  Skidooo was very patient with this so trying not to waste any more time with it we pulled into a rest bay just before sunset.  Both of us topped up the tanks and got ready for riding in the dark. Skidoooo took the lead, he had the lights. Here’s a pic of Skidoooo riding into the sunset taken just before a little roo jumped out between us and I decided not to get the camera out again that day. 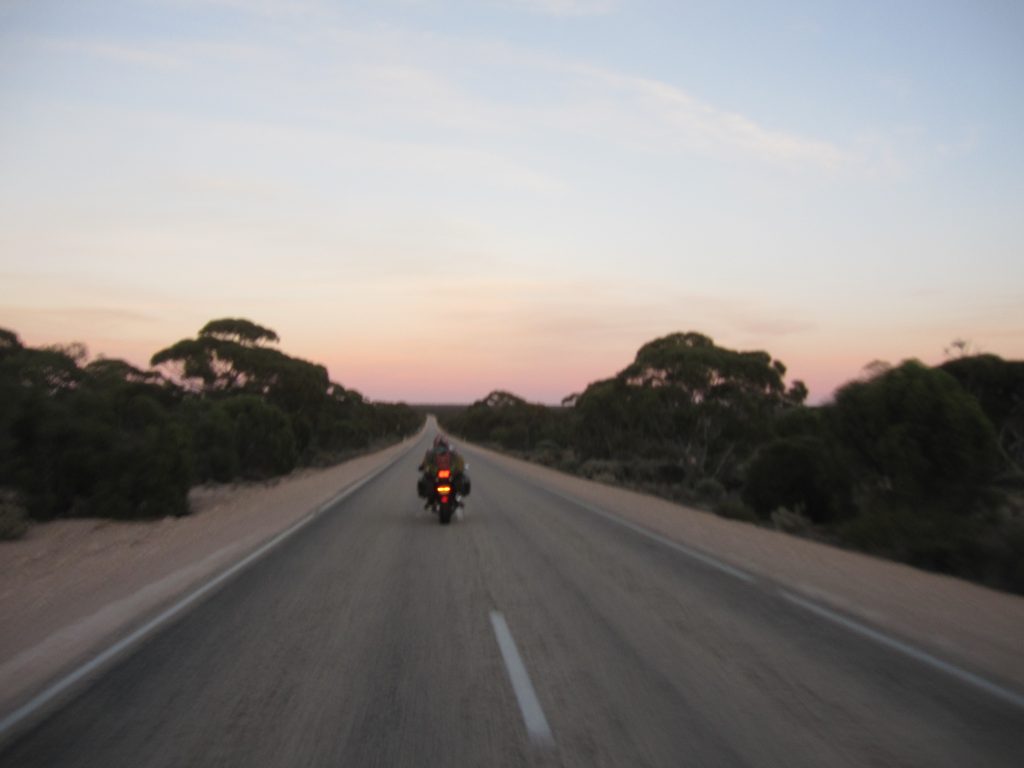 We arrived at Ceduna and got a docket at 12.12am (our time) 2000ks or so done and dusted. I had a room at the Highway One motel and Skidoooo swagged it close by.  We agreed to meet at 5am local time (so the alarms in our iPhones didn’t confuse us) for the next day.

I like to eat at the end of a long day’s ride, so I went in to the roadhouse, got some bangers, onion gravy and mash,  a Goulburn Valley fruit cup, some yoghurt and a ginger beer to recharge.  I was really hoping that I wasn’t going to get food poisoning from the suspicious looking bangers and mash.  Dinner done, removable farkles taken off the bike and the jug and breakfast set up ready for a quick exit I was out like a light.

I was running a little late getting the bits and pieces back on the bike but we grabbed a quick docket at 5.15am (our time), I jumped on the Super Tenere and we were off towards the Nullarbor. We stopped for fuel at the Nullarbor Roadhouse. Note they won’t turn the bowser on unless you go inside and give them your drivers license first!  I don’t know what they put in the fuel out there but it ain’t petrol. Despite the breeze fuel consumption should not have dropped to 12.5km/l.

I had planned the next stop to be Madura but we had to get fuel at Mundrabilla, who only have regular unleaded but it was still better than the premium at Nullarbor.  Did I mention that it was stinking hot again today and windy? 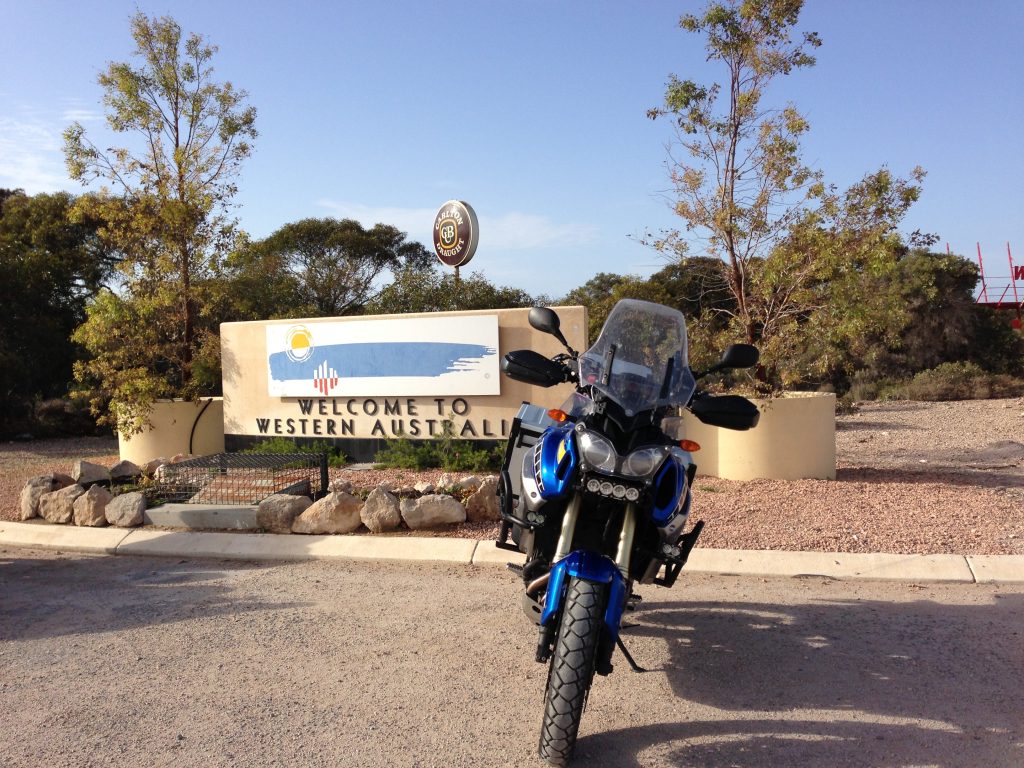 The next stop was Caiguna. By the time we got there we needed to spend some time in some aircon to get our core temps down and we also decided to eat.  I had an excellent bacon and egg roll and a decent coffee, Skidoooo had a very impressive hamburger. Skidoooo was keen to get a pic at the start of the 90 mile straight sign so we put the helmets on, rode 100m up the road and stopped.

Last time I rode the 90 mile straight I was hit by a thunderstorm and a kangaroo.  It was a close call as to whether or not that was better than riding it in ridiculous heat. It was probably the very first time I have been bored on a motorcycle but I did remember to put my blinker on at the bend at the end.  The BP Ultimate we’d filled up on in Caiguna evaporated during that part of the trip so another plan adjustment was made.   We put a splash in at Balladonia and pushed the next fuel stop forward to Coolgardie.  We did however still need to stop at Norseman briefly to make some calls home, do some research and drink lots of water.

It was still blisteringly hot at Coolgardie. I shared some of my Sultana/Pineapple and Gatorade stash with Skidoooo but we didn’t hang around too long.  I had needed to top up out of the jerry before Coolgardie but for some reason decided not to refill the jerry’s when we got there.  After leaving I was haunted by this decision.  Not really knowing what was before us having not ridden it before I was unnecessarily very concerned that the next fuel stop, Merredin would be shut leaving us stranded and our hopes of finishing dashed.  Luckily it was open but I won’t be leaving the jerry empty again.  While at Merredin I mentioned it to Skidoooo and he was actually having the same thoughts along the way.  Here we are at Merredin 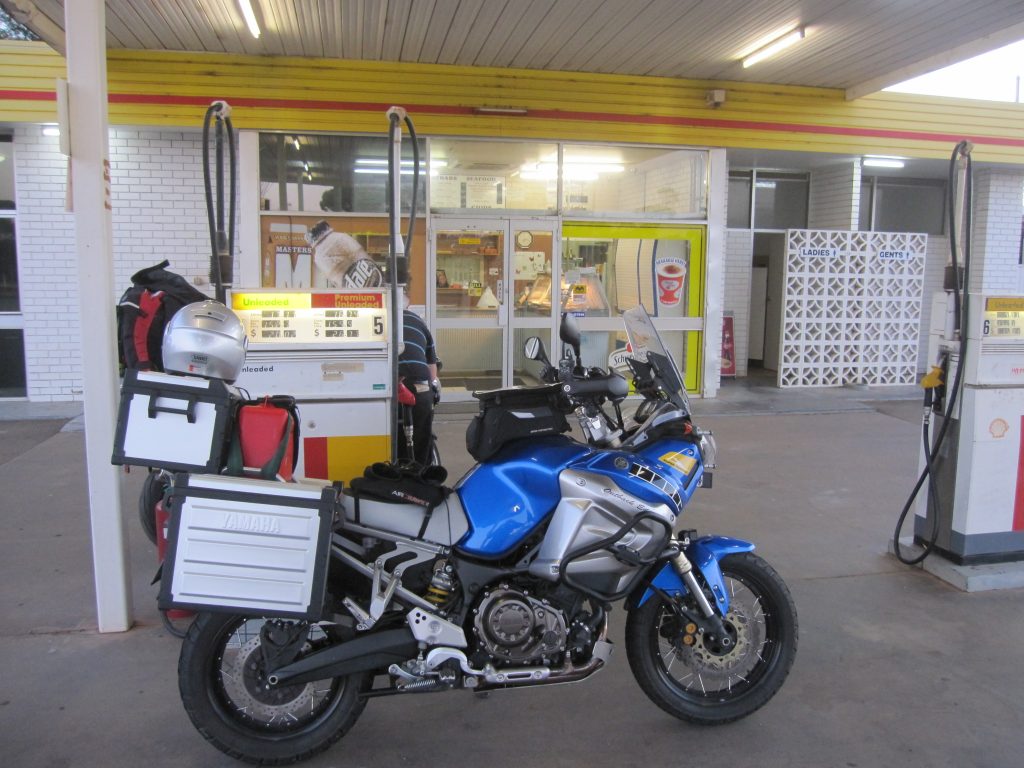 By the way, the staff there eat out of the food warmer with their fingers…. eeeew!

Darkness was on its way again, so Skidoooo took the lead.   For one reason or another people were flashing their lights at us so I got into a rhythm of blasting them back to keep me focused. The next part of the ride into the outskirts of Perth was a great big down hill stretch.  As I mentioned, this route to Perth was new to me, the down hill seemed to go forever.  Our instructions were to meet up with some local FarRiders at the bottom of the hill and I started to wonder if there actually was one!   Soon enough we met up with Gus and Ziggy who were to be our guides to Fremantle for the end of the 50CC and the paperwork.  We had a nice chat, were weren’t in a hurry, it seemed we had arrived in a touch over 46 hours.

The next part of the trip though was a little harrowing for me.  Gus took the lead and rode conservatively but after all that time heading into traffic, lights, cameras, freeway onramps and cars everywhere was quite unsettling. Way too much information to take in after thousands of k’s of nothingness. I was very relieved when I saw the BP at Freo and we pulled in for the end of the ride. The attendant there was a hoot, incredibly keen to be a witness and hear about out feat of endurance  .  He apparently said he’d had a shit day and being part of our travels made it worthwhile.

I was feeling like it was all worthwhile too.  We’d made it!!!!    I can’t really describe it, a proud but busy moment for Skidoooo and I and I have to say sharing the experience it and riding with him was sensational.  The ride wasn’t ending there for us though so sadly we didn’t have an opportunity to celebrate and debrief.  That time will come.  Gus led me to the hotel I had a room booked in at and we agreed to meet at 6am in the morning to be escorted out of town. Skidoooo headed off with Gus.

At the hotel I had an “after long ride day” meal of oats, sultanas, biscuits, chocolate and everything else I could scrounge from the room and off the bike.  Then once again out like a light. Job done.

The Super Tenere performed flawlessly except for the issue with the auxiliary lighting.  There I was in Perth after 47 hours including stops.  The ride log, witness statements, timed and dated fuel dockets are all to hand and will be submitted to the IBA for certification.

While a little frustrated by the fuel range of the Super Tenere I’m completely convinced it’s a fantastic Iron Butt machine and right now I hope it remains as comfortable as it was on this trip, because in a few hours I’m heading home.