Today I rode my 50th Iron Butt Ride. My current ride fitness is quite poor not having done one since the ACT Insanity in June and the Dusty Butt in April. Therefore doing anything extravagant to celebrate the half-ton was out of the question.  I picked a route I’ve ridden before as an “easy” 1660km “warm-up” to blow the cobwebs out.  As it turned out I was reminded of a few things about the sport of Iron Butt riding along the way. My weapon of choice was The Bumble-Bee a 2016 Yamaha Super Tenere ZE.

I was up at 3am for a 4am start at Wallsend with fantastic pre-dawn riding conditions heading south to on the M1. The 80kph roadworks north of the Ourimbah turn-off were much less bothersome than the 2kms of three lane gridlock merging to at the top of the long hill just south of it. My overall average speed (OA) plummeted and I was thankful for lane filtering laws and the considerate drivers and truckies who let me through.   I had a good run down Pennant Hills Road, the M2 and the M7 as the sun came up.  Then it was time to kick back with the cruise engaged and settled into the Hume.

My first stop for fuel was the Big Merino at Goulburn (342km). The Super Tenere was averaging an impressive 4.7l/100km. The new Super Tenere is much more fuel efficient than old blue (2010 model). 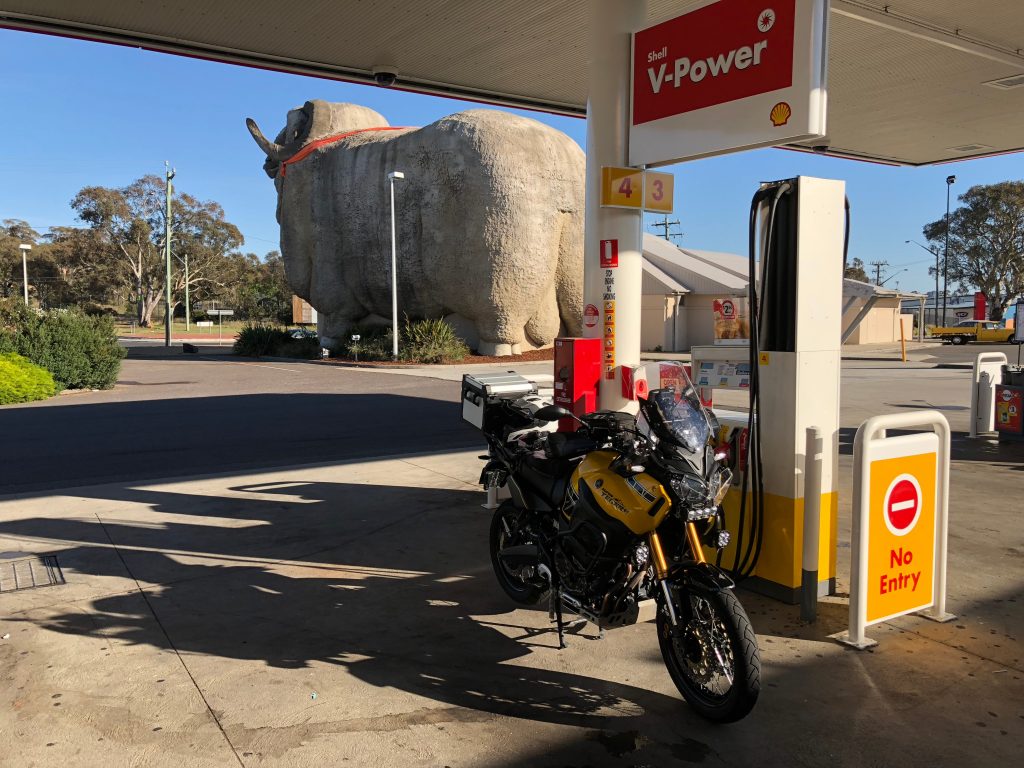 Continuing south towards Gundagai I was bopping along to my favourite tunes on shuffle thinking about how nice the weather was and how much I was looking forward to a full day on the bike. I made a small detour to grab a pic of the Dog on the Tuckerbox out of habit. 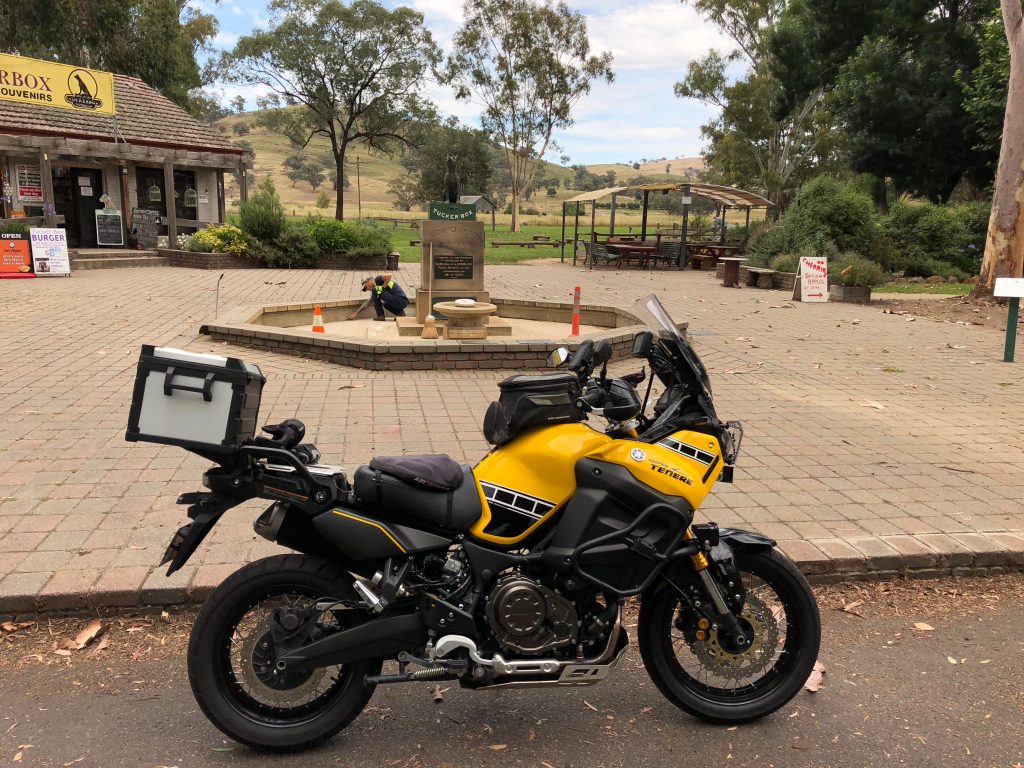 I continued riding south and took the exit to Wagga Wagga. It was a pleasant enough 29 degrees at Gumly Gumly!  How soon it can change. By the time travelled 30km to Collingullie the temperature had jumped 35 degrees and 40 kms later it hit 40. A cross wind from my right blew up that suddenly kept me busy holding a line and made overtaking semi-trailers interesting. All in a day’s ride when you are covering large distances.

I fuelled up at Gillenbah (695km), bought some cold water, had a swig and tipped the rest inside my Klim Badlands Jacket getting a few laughs from the peanut gallery in the smokers area at the roadhouse. I noticed I was starting to feel a bit tender, unusual for me for this distance. I packed it away and kept going. 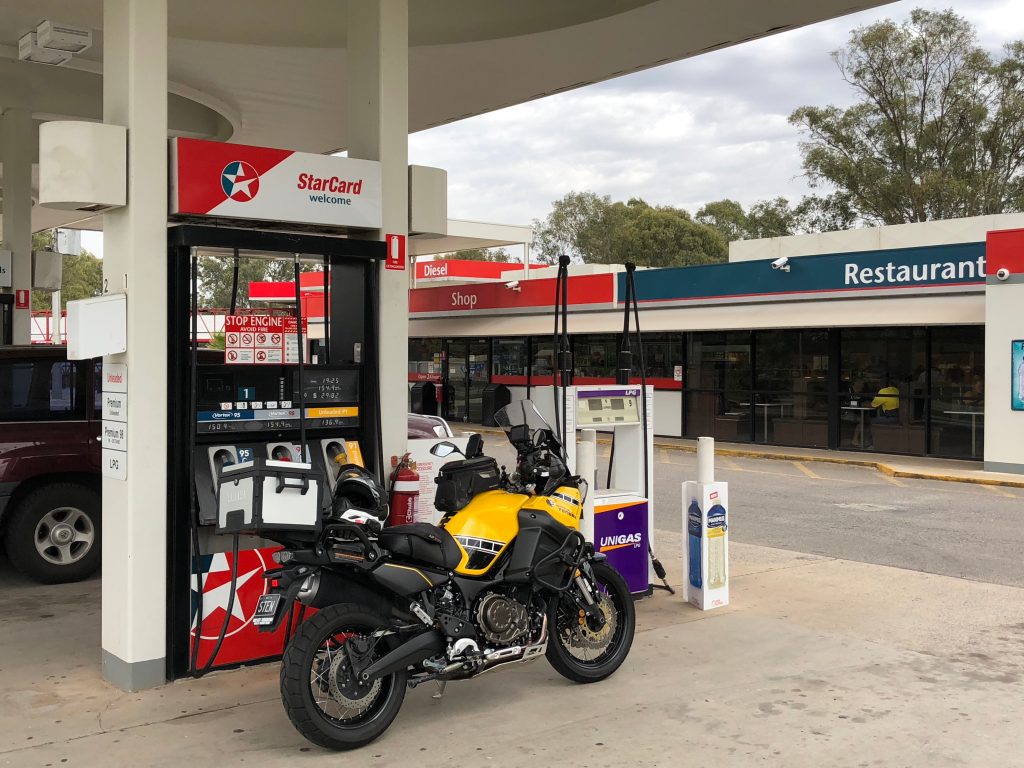 From Gillenbah I took the Newell Hwy to Jerilderie expecting the breeze to be behind me now.  Not so, it had shifted and was still blasting from my right adding dust from the recently cropped and prepared farmland along the route. Fuel consumption jumped to over 6 l/100km while the bike was fighting it’s way through the wind and the dust. I took note of a couple of things along there I’ll photograph next time but stopping in those conditions didn’t feel like a good option. However at Jerilderie I did stop for a quick pick of a cool looking tank. 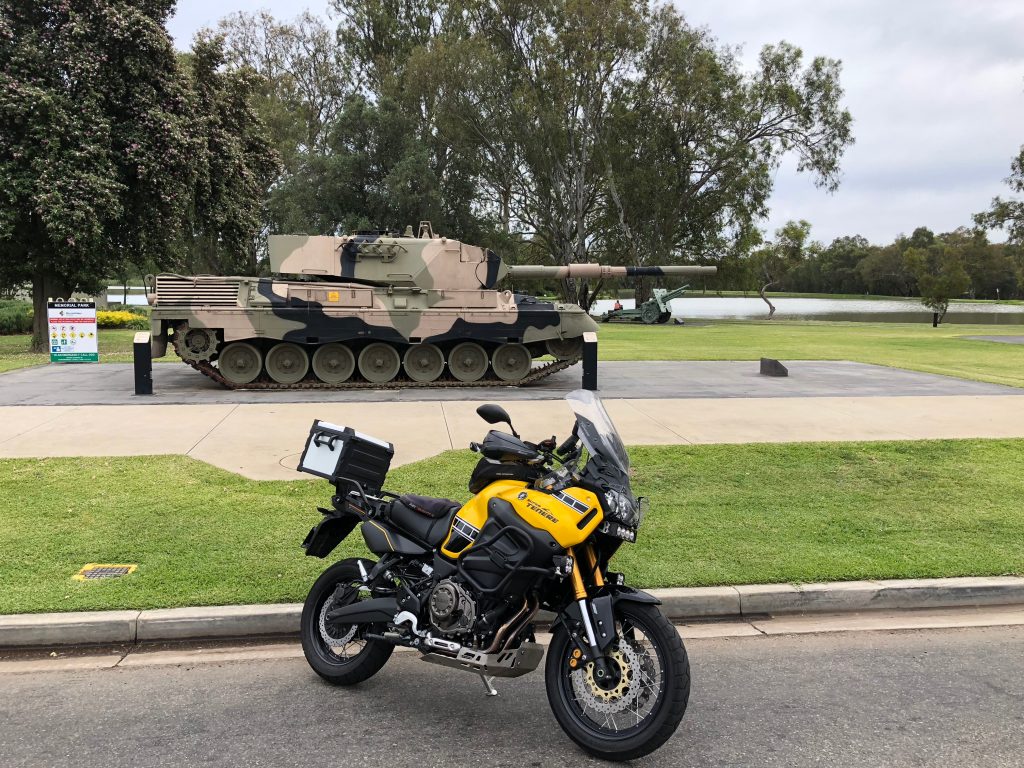 I also stopped at the BP there (800km). The exertion of keeping the bike going straight in the gusty wind clearly required replacement calories so I ordered a toasted sandwich and another bottle of cold water to pour down the jacket. It’s unusual for me to eat anything other than a muesli bar or sultanas in the first 1200kms of a ride but I needed the food. I also needed a corner docket there to prove the route for IBA Certification purposes. 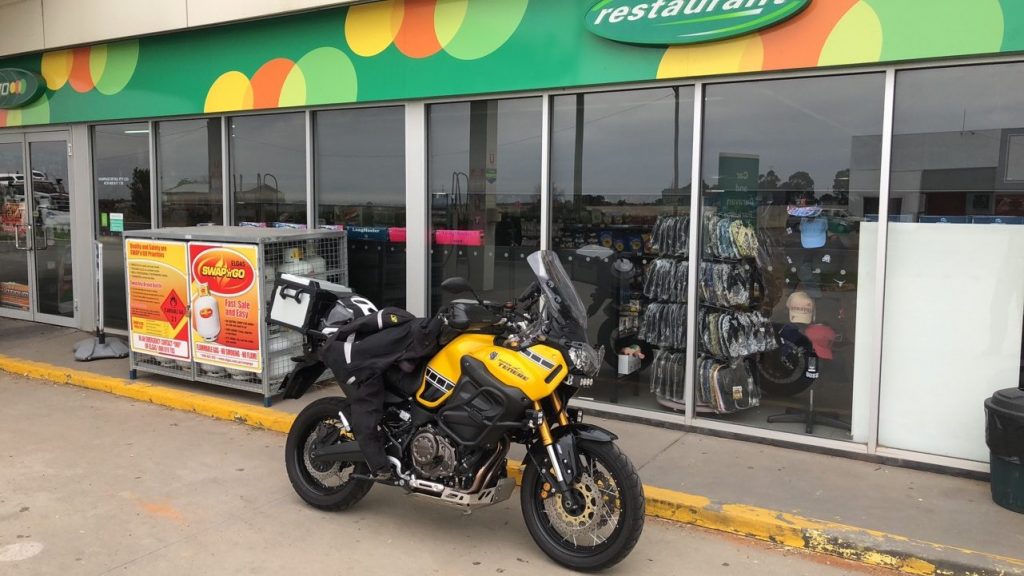 Next up was the doddle into Albury through Berrigan and Howlong and the Riverina Hwy.  It’s a nice ride through there, a change of scenery from the Hume and the huge plains. A bit of cloud cover took the edge off the sun which made it all the more pleasant. I refuelled at Albury (960km) and headed back to the Hume feeling like I was almost home.  Heading north I was riding in a cool(er) change that had come from the south, back to 29 – 32 degrees.

Fuel economy on the Super Tenere returned to excellent, getting down to 4.6 l/100km average at one stage. This meant I’d only need one stop for the 700kms between Albury and Newcastle. During this period of the ride my lack of ride fitness really started to show.  My shoulders, knees and the not-so-iron-any-more butt were paying the price for my lack of riding commitment this year. I was fidgeting and was spectacularly unsuccessful in identifying the elusive comfort sweet spot.

Fidgeting on the bike and sharing riding focus with discomfort adds to physical and mental fatigue levels. Careful monitoring is required and if you can’t pack the pain away enough to ride well it’s time to stop. I planned to splash and dash at Goulburn and keep going however I decided to visit the Subway for a healthy salad roll, a bit of a stretch break and head reset.  While there I swapped out my Sena SMH-10’s.  The No.1 had gone flat about Yass and the number 2 was fully charged in the tank bag ready to clip onto the helmet. I had music for the whole of the last leg, awesome.  Once revived and after a quick chat with Mrs Wom I left Goulburn and rode north towards an ominous looking sky.

Going over the Southern Highlands I slipped ahead of the cool change and the temperature jumped back up to 35 degrees as the sun went down. As I approached the M7 towards Sydney lightning was getting closer and putting on an impressive but threatening show ahead.  Much of the highway was wet from thunderstorms that recently passed over it. By 8pm the temp had settled on 30, it was humid and I found myself riding through the tail of the thunderstorms here and there.  I still hadn’t found a comfortable sitting position, standing in multi-lane traffic in a thunderstorm isn’t recommended.

My shoulders were burning and my knees were also on fire. The covering around my ischial tuberosities was begging for a break.  I pondered briefly the IBA “Worlds Toughest Riders” badge. I don’t think any of us really think that we are. Putting up with discomfort and being determined enough to get it done safely no matter what’s thrown at you is a clear requirement though. Pack it away, focus on the ride and keep going – only a couple of hundred k’s to go.

Rain peppered me a few times, with lightning too close for comfort only once.  I left the storms behind me by Wyong but mother nature decided to dot the I’s as I headed back into Newcastle providing thick bushfire smoke to fill my lungs from a large blaze that had been burning in the lower Hunter Valley. Nice!

A finish receipt bang on 10pm finished the ride at a touch under 18 hours for the 1660kms.  IBA ride number 50 celebrated with the traditional sweetness. Cherry Ripes should be a rule! 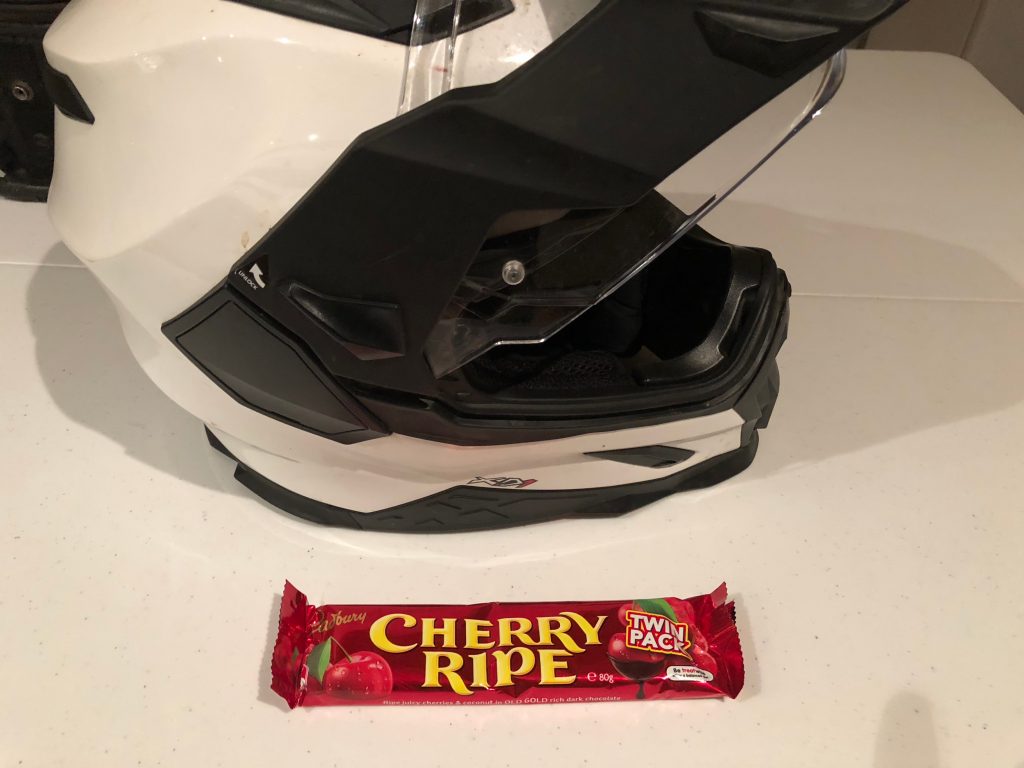 A year or so ago I’d have said that I could get up pretty much any day and ride an SS1600K, in fact there have been days where I did just that.  After having ridden 28 or so 1600’s (certified) I reckon I had started to underestimate how hard they really were. Today’s ride, which on the face of it looked simple enough, reminded me this IBA caper can be tough and proper preparation leading up to one is recommended if you don’t want to end up in a world of pain.

So my 50th individual IBA ride, while not remarkable in terms of my ride portfolio took me back to my early IBA days where instead of getting up the next day ready to do it again I needed a sleep-in and seem to have developed something in common with a baboon……  Oh for heavens sake! Give me a tissue and a passionfruit caprioska, I need a freaking HTFU pill!

For the numbers people