The weatherman reckoned it was going to get hot later in the week so I decided to cobble together a quick route (not a plan) and bang out an SS1600K with a view to seek cloud cover and cooler temps. My last two IBA Rides were pretty simple so I decided to turn up the wick up a bit with lots of corners and attack them on the Africa Twin.

The ride kicked off just after 3am with a darkness run up the slab to the “Donut”, BP Thrumster (231kms) where I fuelled up in the pre dawn. Then I headed west through Wauchope to Long Flat while the sun rose but no-one was home at the pub. 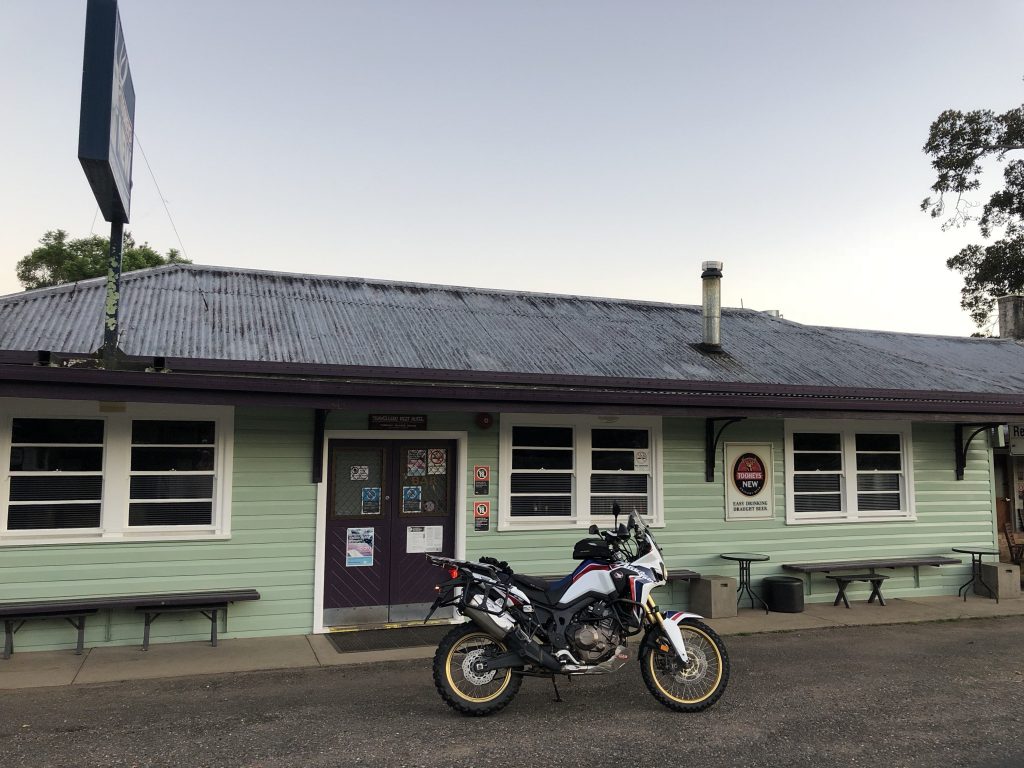 I had an almost clear run up to Gingers Creek which was fantastic. I encountered only one semi-trailer right on an overtaking area. It was cool and the road was dry.  Some light fog was lingering at the top of the mountain after Gingers so the road was damp in places. The Africa Twin was wearing a newish set of Motoz Tractionator Adventures (Adventure 2 Front) and while I was “wearing in” the footpegs on corners here and there the tyres held on just fine, even in the damp bits. These fairly aggressive adventure tyres are surprisingly good on the tar.

Wrestling the 21″ front wheel with the Ultra Heavy Duty tubes around the bends kept me pretty busy though.  I’m not sure I’ll ever get used to that but it’s still fun.  A quick stop for a breather at Apsely Falls. 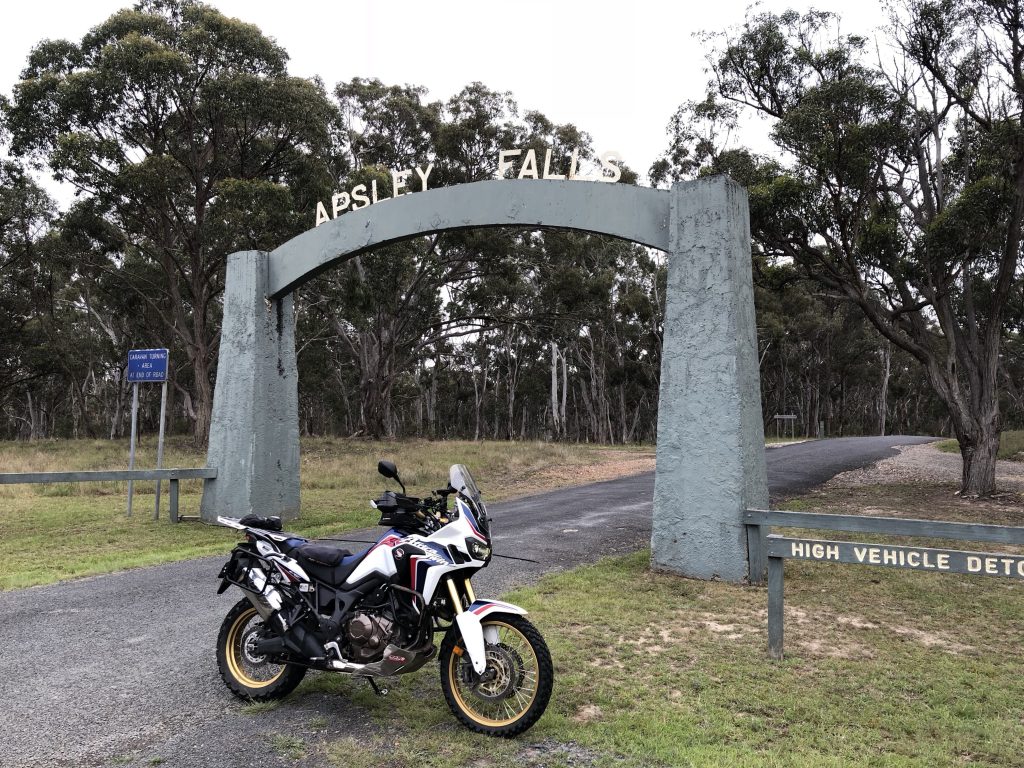 From there it was nice open curves through to Walcha , a right turn at the roundabout there to Uralla and fuel at the Caltex near Armidale Airport (8:05am 462kms). A quick right took me through Armidale on to Waterfall Way.  I made my way to Ebor then down the old Armidale Road toward Grafton.  This road is fun! Lots of corners, narrow, rough surfaces, potholes and the occasional cow.

Cornering harder in the rough kept me on my toes with the front and rear stepping out, I don’t think the front wheel/suspension on the AT is quite up to the demands I like to put on them.  Traction control on the rear kicked in a few times taking drive away while heading out of the corners – oh well.  I’ve ridden this road a few times on a Harley, Super Tenere, a 1290 Super Adventure and while it was still bags of fun the AT’s probably not the bike for it in comparison. The Tractionators grabbed on to everything they could and they didn’t give me any real surprises though.  I’ve had similar experiences on the AT with the lighter OEM tyres and tubes before so I was expecting it. Increasing the difficulty level is part of the fun isn’t it?

My next fuel stop was Grafton (663km) then I rode up the Summerland Way to Casino (11:43am).  I needed a corner docket there to prove the route so I got fuel and took some time to enjoy some Sultanas and a Muesli bar. The temp was still in the 20’s, it was really very pleasant riding weather.

From Casino I took the Bruxner Hwy towards Tenterfield.  The Bruxner is another fun and windy road. With the surface improvements the “moments” disappeared and it was back to business as usual. I stopped for a photo at the Lunatic Hotel in Drake nicely situated at the start (or end) of some of the best corners on that road.

From there some cornering fun was had heading to Tenterfield.  Then south on one of the less boring and congested sections of the New England Hwy to Glen Innes where I took a right to Inverell (3:02pm 1053km) for more fuel. Only 600kms to go!

The Africa Twin was reporting and average of nearly 5.9 l/100km (5.6 l/100km calculated post ride) which is frankly pretty disappointing given I wasn’t riding all that hard or fast.  I was also using the McCruise cruise control wherever it made sense to do so. This is the fourth Iron Butt Ride I’ve done on the AT. The first was a group ride with lots of stops, then Newcastle to Renmark via the Cobb Hwy, and the Dusty Butt (all on gravel) so this is really the first “serious one” I can use to compare it properly with other bikes I’ve ridden. The AT uses more fuel than the Super Tenere (particulary the 2016 one) and the 1290 Super Adventure that both come in between 4.9 and 5.2 l/100km on these roads. That combined with only 18.8 litres on board only makes me look forward to the 2018 Africa Twin Adventure Sports with an extra 5.4 litres of fuel capacity. It goes without saying the AT is still a fantastic off-road machine (still thirsty) and I’m definitely not selling it (or any of my others Mrs Wom!).

Oh, on the way to Inverell I stopped for a quick snap of the wind farm. I like wind farms! I was also out of the clouds that were hanging around the mountains all day and the temperature settled in to the the high 20’s.

Back to the ride.  I took Thunderbolts Way through Barraba towards Uralla. Because I had no real plan and just a sense of the distances I selected Thrumster (Waypoint) into the Montana 680T and it told me less than 200km. Based on that I decided to ride straight through. During this stretch the temperature peaked for the day at only  32 degrees so no time was wasted unzipping vents on the Klim Badlands. I did stop at Uralla briefly for a pic of the dastardly bushranger Thunderbolt himself. Photos with GPS/Time/Date data embedded are helpful to prove where you’ve been. 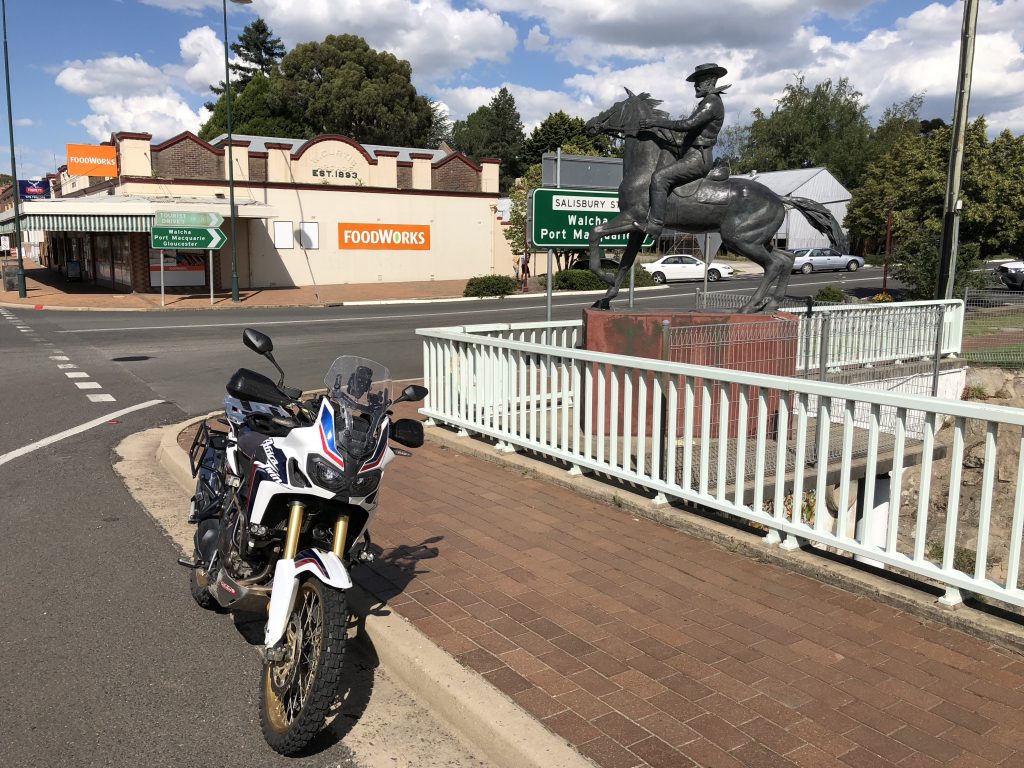 From there I was just cruising along enjoying the scenery, rode though Walcha and looked at the servo on the way past without giving it too much thought.  Just outside of town the sign reported Wauchope was 164kms away…eh something’s gone wrong there? I looked at the fuel gauge, it was on three bars and felt a little nervous. Not too much further it was dropped to two, with around 150km to go.  Oops..  I rode back 15k’s to Walcha and filled up.  It took over 11 litres – I was never going to make it to Wauchope let alone the Donut. Such a silly mistake on my part. Do better Wom! Thankfully this ride wasn’t time critical.

Back on track I stopped to take a photo of something that just should not be! I thought profane thoughts about the pencil pushers that decided to reduce the speed limit on this part of the Oxley Hwy. Then I visualised being wrapped in cotton wool against my will by an unreasonably doting and dismissive Nanna called “State” and proceeded. Mungs!

On the mountain I was back into the clouds and the temp dropped to the low 20’s, nice. Traffic was light with the drivers being considerate and moving left to let me past. None of them were even cutting the corners!

Back at the Thrumster Donut I was starting to feel a bit worse for wear having wrangled the AT around corners for most of the 1407km so far day. A couple of McChickens and a Soy Flat White combined with a call home (where I got counselled for having the Flat White given I’ve been caffeine free for a few months) sorted me out.  I swapped the sunnies for the clears and rode off with he sun setting to my right.  I arrived back at the start for a finish docket at 10.12pm – and of course my traditional post Iron Butt ride treat! 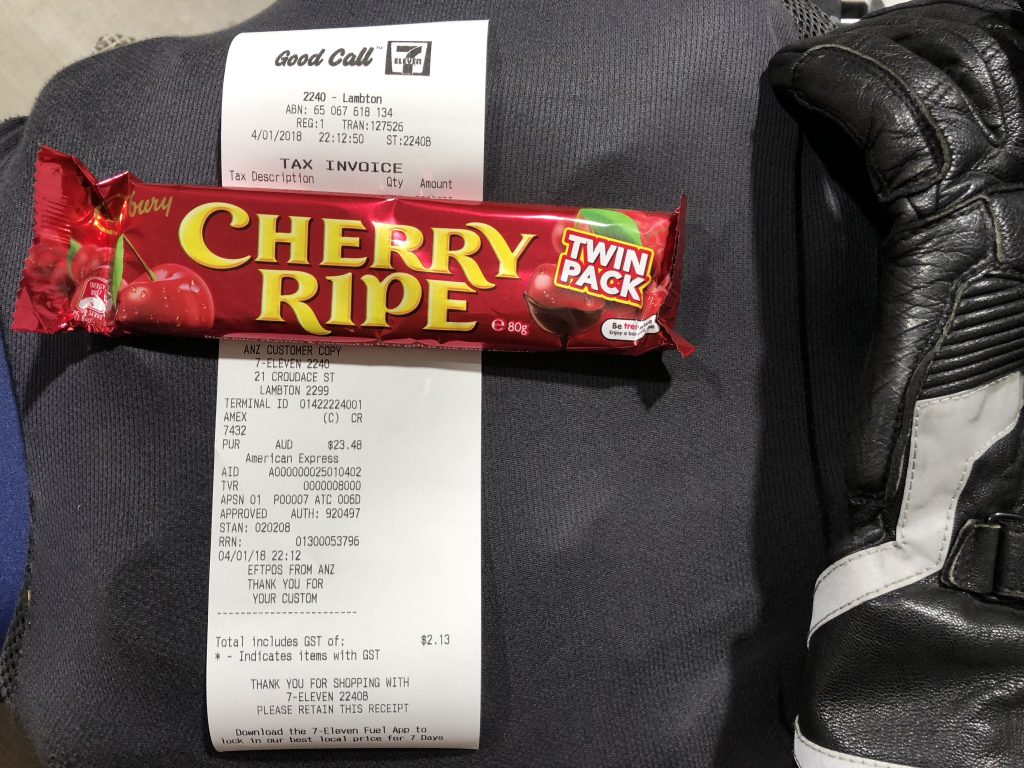 So all up a great day with some great roads, never ending corners, fantastic scenery and a wind farm. The AT is a brilliant Adventure/Off-Road bike and a capable long distance option it’s not really a “mile muncher” in it’s current form.  The Motoz Tractionators held up great and still aren’t showing much wear after nearly 3000k’s of mostly road riding so hopefully I’ll get them and the bike back into some dirt soon where they belong.