I was torn between attending the third IBA Muster and attending my University graduation ceremony, a sad conflict of dates to resolve but looking back the right decision was made. Spending time with my fellow Iron Butt Riders is just plain gold. But to get a seat at the table at the Muster an IBA ride to the destination, this time Dalby in Queensland, is a must.

An unusually bad night’s sleep saw me up at 1.40am and taking my time to get ready for a planned 3am departure. My start docket at the local was 2.59am and off I went into the familiar darkness of the Hunter Expressway.  A few k’s into the ride I realised I’d forgotten to reset the trip computer on the Montana so with that out of the way it was time to kick back and relax. 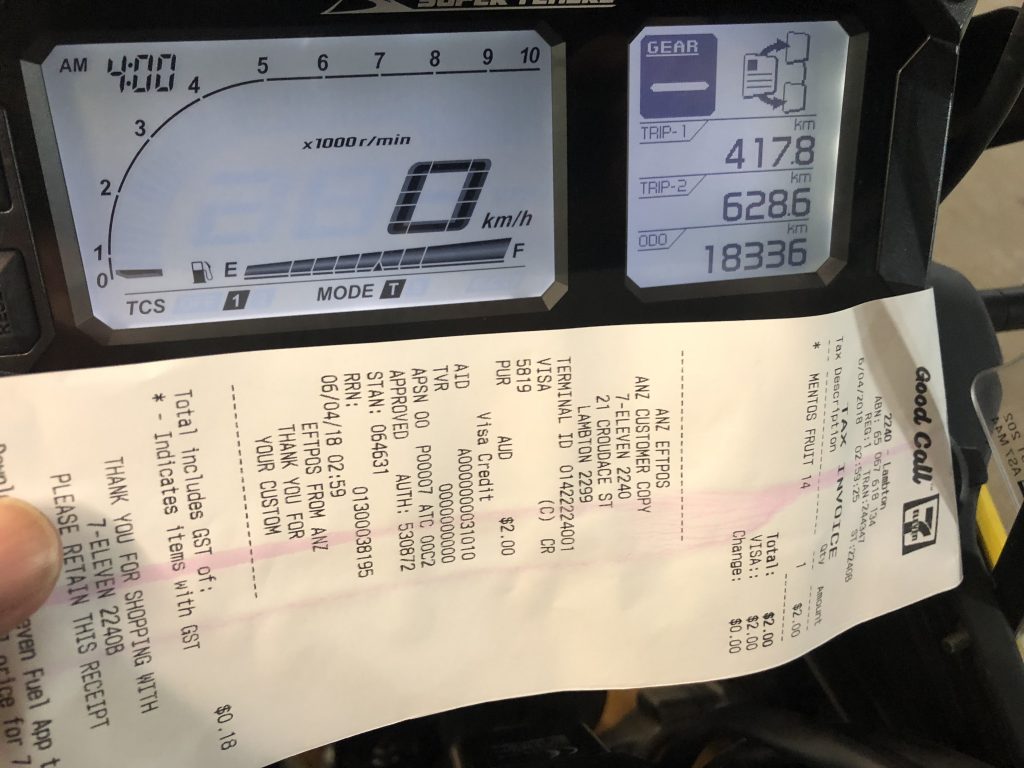 I also didn’t adjust the clock on the Super Tenere back to AEST after daylight savings finished :-).  I’ll have to work out how to do it again at some stage. I never use it anyway, the only important times to me are the ones on the dockets.

Fantastic riding conditions on a cool night with some light fog about made me happy to be out amongst it again. This time instead of turning left on the Golden Highway towards Jerrys Plains I needed to ride up to Muswellbrook to add some k’s into the ride to ensure sufficient distance. IBA riding is a bit bizarre having to try to work out a 1610km route to a place that’s only 762kms away and still riding it in a day.

A quick tank top up and docket at the 24 hour Caltex servo then a left towards Denman.  I’d not ridden this route before and frankly I’m considering using it in future when heading west at night.  There were significantly less kangaroos than there are past the Singleton Army Barracks and Jerry’s plains.

I was stopped briefly by a large coal train at the Denman Crossing but other than that it was smooth sailing through the light fog through Sandy Hollow, Merriwa and Duneedoo as the sun made it’s way slowly into the sky. 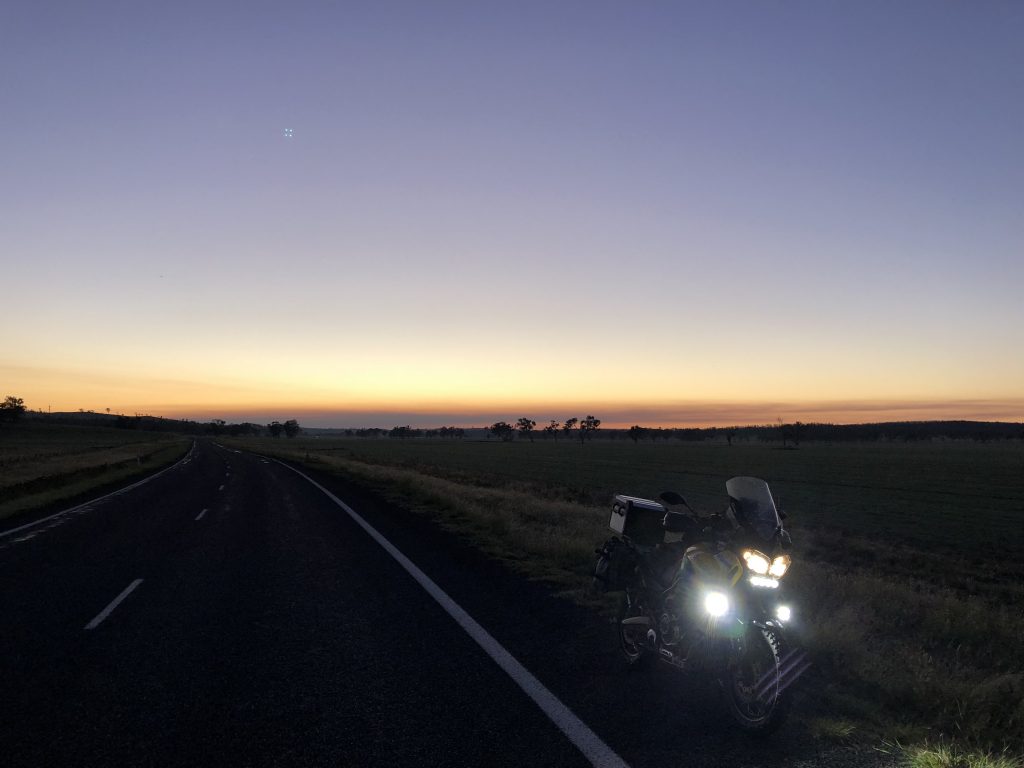 My next stop was the Shell Truckport in Gilgandra (via Mendooran). 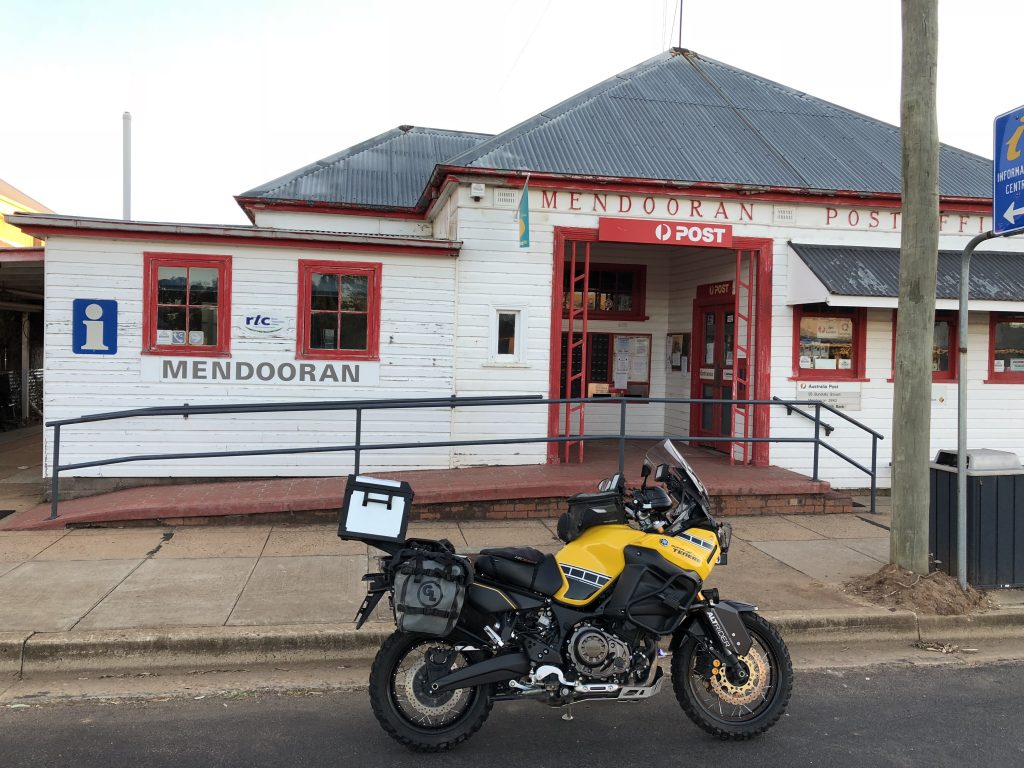 I had plans to meet up with Rob in Nyngan. Rob was riding from Sydney. I was ahead of schedule in Gilgandra (388kms) so I took some time to have a hot chocolate and call the missus. That taken care of I continued west towards Warren and had a quick giggle as I rode past the spot I blew up my CBR125R a few weeks back trying to ride it to Perth.

Nevertire was quiet although there’d be a few IBA riders take photos here on the way to Dalby today. 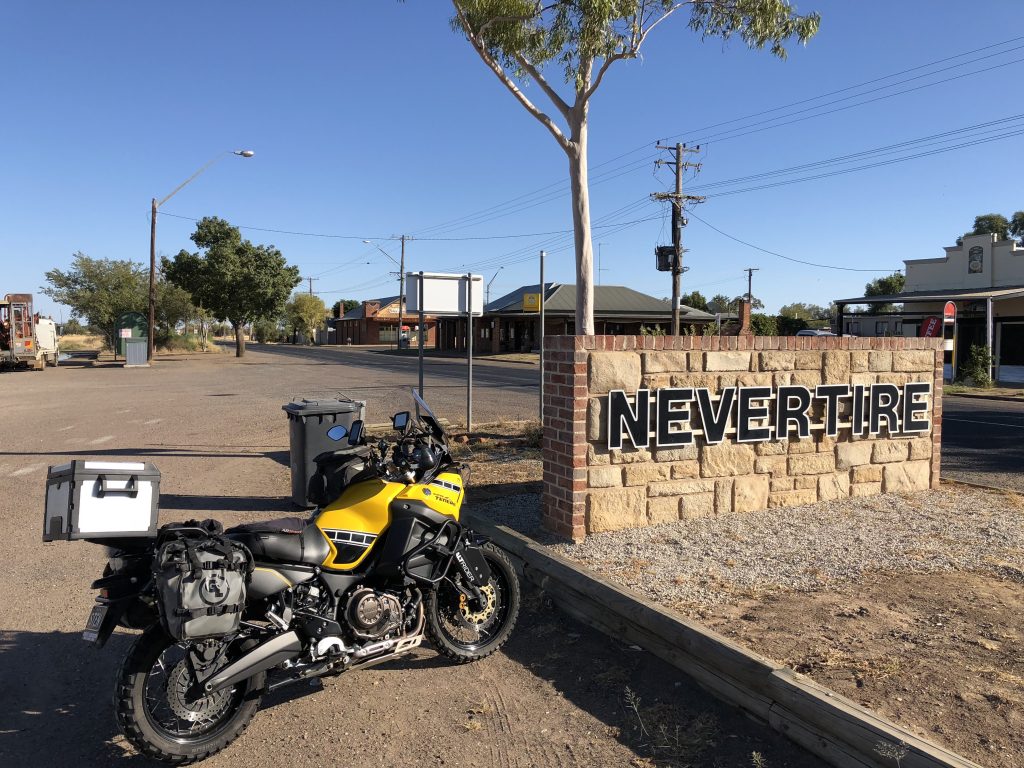 I arrived at Nyngan (554kms) about 9.10am, about 20 minutes before Rob was due to ride in.  So I adjusted my layers for the day, took care of business, fuelled the bike and ordered a couple of ham and cheese toasted sandwiches (one for Rob).  He arrived on time fuelled up and we took our time catching up. An SS1600k on these roads is definitely not time critical.

I don’t recall having ridden directly to Bourke from Nyngan too often, I usually turn left on the Barrier Hwy heading west  to Cobar or ride through Bourke back to Nyngan.  I was reminded though that there’s not much out there and frankly I like it that way.  We fuelled up in the heat at Bourke (759kms), I guess it was in the mid 30’s but dry so it wasn’t unpleasant.

I stopped for a quick border crossing pic at “I haven’t got a clue where”. 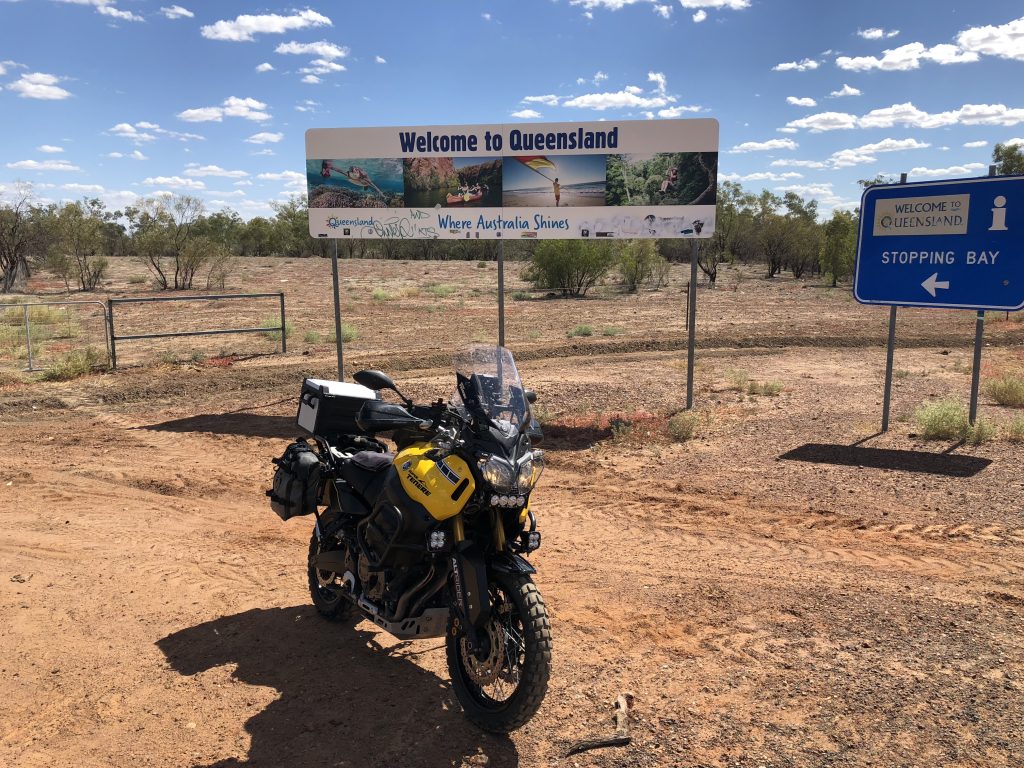 From there we headed north to Cunnamulla  (1014 kms) for the next corner docket/fuel stop. The stops from Nyngan were a good distance in terms of fuel range for the Super Tenere. Riding tank to tank helps with making good time. We made it but we missed it. 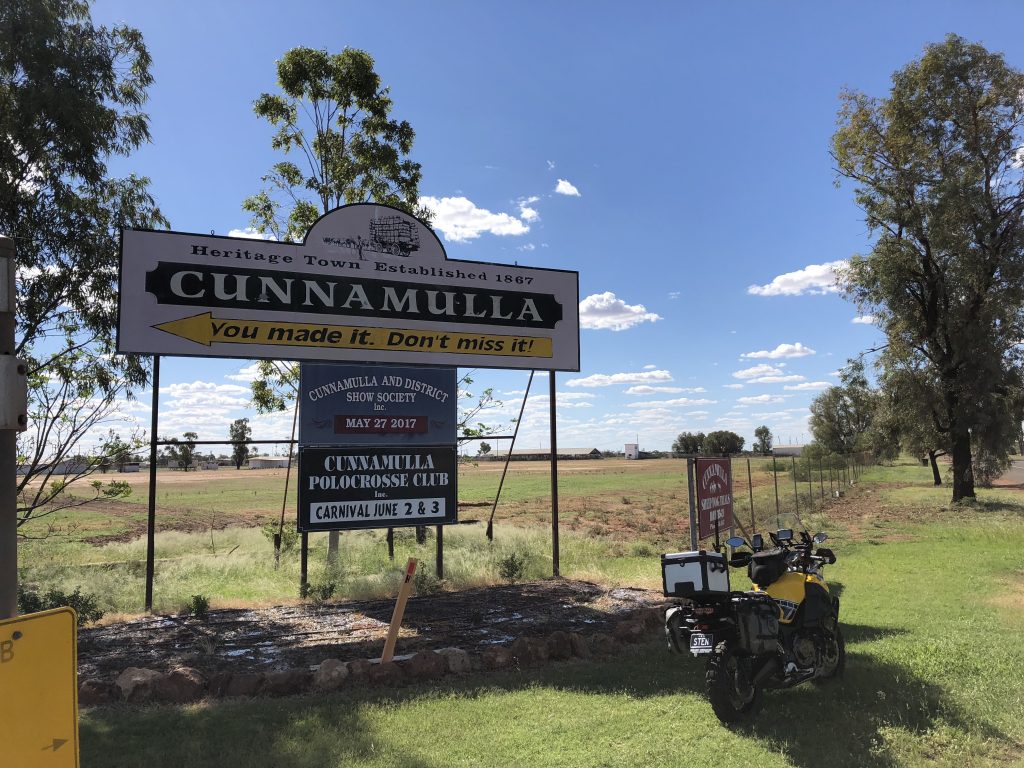 The next tank full was St George QLD (1306kms).  It was still daylight and the servo guy, who had a bit of a sense of humour, asked Rob when he went inside to pay if his was the diesel.  This joke would make most of us startle but it’s a particularly sensitive issue for Rob.  Aside from the laugh he was helpful with information about the more kangaroo populated areas we were heading into and where decent food stops might be.

The number of bleached piles of kangaroo, emu and other bones littering the side of the Balonne and Moonie Highways  were enough to create some trepidation about the animal chaos that might occur after dark.  Fortunately though, we hardly saw any roos for the rest of the trip.

The roadhouse at Moonie (1496kms) was jumping and although only a hundred or so k’s from the finish Rob and I decided to kick back and have a feed.  I can recommend this place for food and coffee. The restaurant closes at 9pm. There’s also a bar there if you are interested. After kicking back, chatting some more and having a pretty good burger each Rob and I jumped on the bikes for the final leg.  I had been astounded that other than the early morning stop with the train we hadn’t been stopped by roadworks a single time the whole day.  That’s incredibly unusual.

Heading into Dalby though, in sight and within 30 metres of the servo we were finishing at we were stopped for 5 minutes by massive roadworks going on right in the middle of town. Murphy’s Law wins again. We filled the tanks, got some dockets and made out way to the motel.

The rules of the muster ride is that it should finish on the day of the muster. We are entitled to rest in any part of the ride so we took the bikes to the Drover’s In Motel and went looking for some refreshments while we rested.

McDonalds at midnight was full of Iron Butt riders waiting for the clock to tick over and get that all important finished docket dated on Saturday. It was a meet and greet and midnight feast that continued for over an hour before everyone made their way back to their digs for a well earned rest.

An awesome day, great weather, great riding conditions and the darktime roo’s stayed away! Everyone arrived to the muster safe and sound all with their own stories which were shared in detail over the rest of the weekend.

The numbers for me