With the Super Tenere getting serviced and the Africa Twin minus a footpeg the only option in the shed for today’s Iron Butt ride was Little Mango, the mighty 2012 CBR125R.  So I bolted on the Etrex, SPOT and dusty old Tomtom, took off the top box and replaced it with my trusty jerry can rack. A quick tyre check, filled ‘er up with fuel and I was ready for the morning. I didn’t dust the bike off, rain was forecast.

Start time at Wallsend was about 3am, the start docket was for a $1.10 bottle of water I took a swig from on the way to the garbage. Then I was off into the night riding west on the Hunter Expressway. It was cool and there was a light misty rain falling. I managed to tuck in behind a truck until I turned left towards Jerry’s Plains on a section of road I know as Kangaroo Alley. I was stuck behind a huge wide load for most of that stretch and saw more live roos there than I ever have. The unmistakable odour of road kill and fresh blood also kept me company.

Jerry’s Plains, Denman and Merriwa were all quiet except for the bakery at Merriwa serving coffee and nice fresh pies to a few early starters but I had no time to stop there today. The fuel economy on the little 125 was exceptional, the 13 litres on board took me through Dunedoo all the way to Gilgandra (369kms) where I topped up with the 10 litre jerry.  Little Mango was purring like a kitten, albeit a very, very loud one.

The weather turned worse heading towards Collie, then Warren. The wind came up and there were showers here and there to cool things off. Wind is never good for the 125 when you are trying to make progress and I often had to drop back to 5th to make headway. I stopped for a quick pic at Nevertire then continued down the long straight towards Nyngan with a cross wind blowing me all over the road. 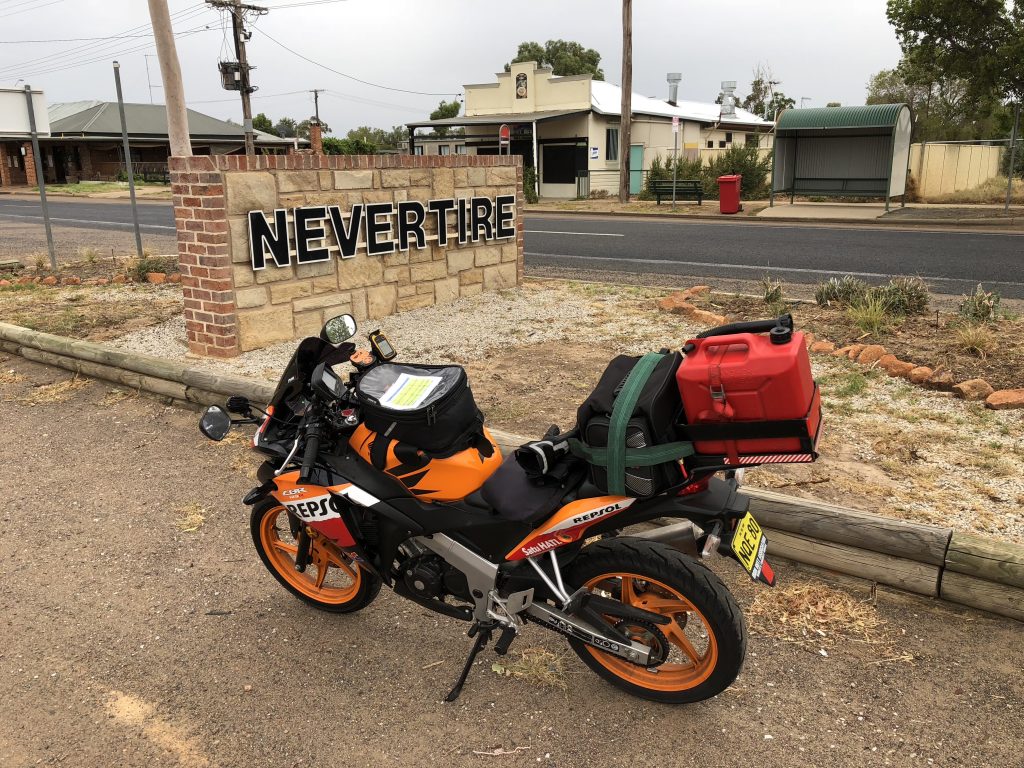 The heavier rain in this area saved me the trouble of having to clean the bugs off my visor and the dust on the bike was washed off as hoped.

I filled the tank and the jerry at Nyngan (546km) and at the same time picked up the printed receipt to satisfy the Iron Butt Association’s “at least every 600km” rule. I was feeling the cold a bit more than usual today as I lined up to pay but I knew, if the forecast was right, blue skies and warmer temperatures were ahead.

At the fuel stop I also needed to spend some time duct taping one of the mirrors that had repaid me for not tweaking it up before I left by flapping about. Tape is quicker than the disassembly effort required to retighten it. While I’m at it, the old TomTom wasn’t charging either so I turned that off.  I shouldn’t have been surprised since it hasn’t worked the last few times I’ve had it on a bike. 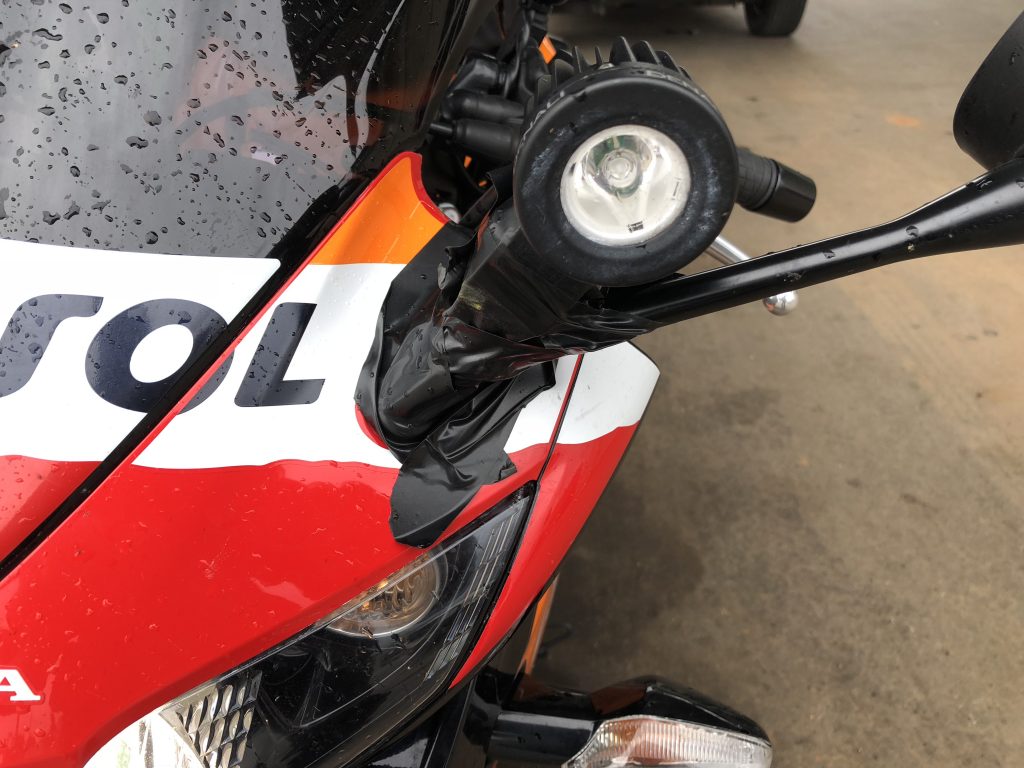 I stopped for a train as I was leaving Nyngan and stopped for it again on the Barrier Highway just out of town. It’s strange how it crosses roads three times in about 2kms out there. It was then time to settle down and think about the bacon and egg roll with my name on it at the Emmdale Roadhouse. But not before another photo op at the old mine at Cobar. It’s a must do, not sure why.

It started to warm up a bit from there, there’s not much to see but goats, sheep, the occasional emu, ‘roos and abundant road kill but I still love it out there. Oh, and naturally the roadworks were waiting for me too. 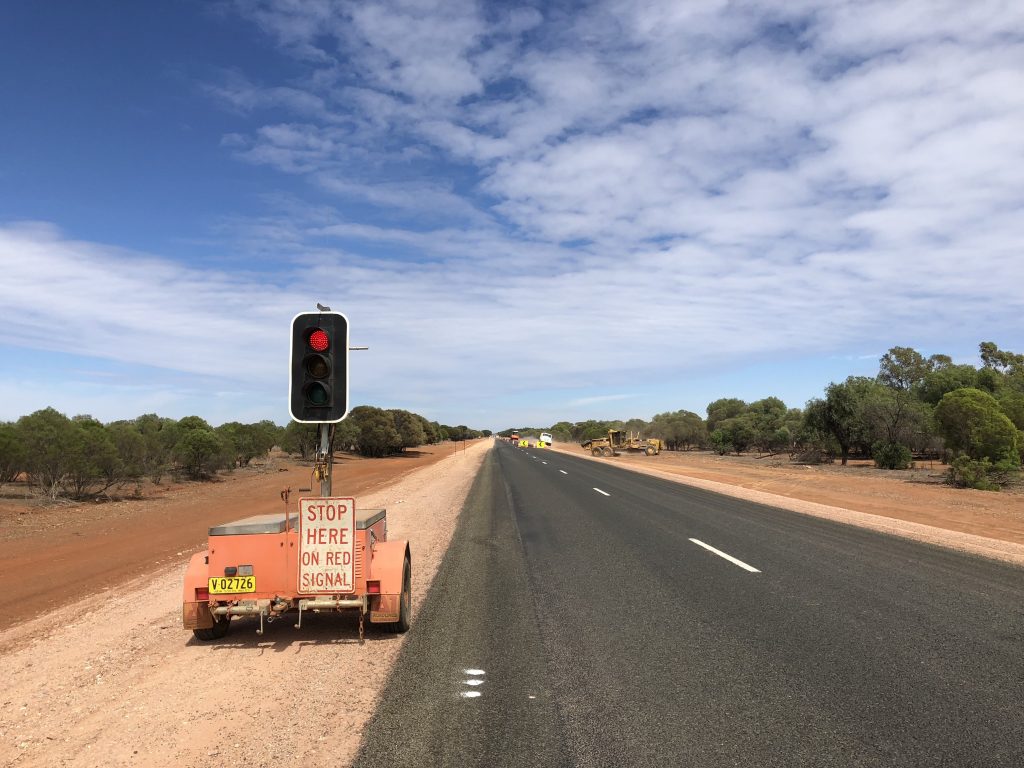 Riding Iron Butt rides on a 125 is all about momentum, you can’t speed, all you can do is select the perfect gear to push against the wind or get you up the hill without pushing so hard the engine blows up.  It took me two engines to get it right. My rule is to keep over 7000rpm and under 8500rpm and cruise if I can at 8000rpm. The only way you can really make up time is to be efficient with the stops. That’s why I had the jerry on board, it takes me less than 5 minutes to refill from the jerry and 8-10 minutes at a servo, longer if there’s a line. My overall average (OA) when I arrived at Emmdale (837km) was a respectable 89kph, stopped time less than 23 minutes.

My plan was to refill from the jerry at Emmdale while they were cooking my bacon and egg roll. I didn’t rush, just stayed focussed without being impolite to people who wanted to chat about their motorcycles. I took a snap or two and visited the Rat. I savoured the bacon and egg roll too, it was the only food I would eat all day that didn’t come from the tank bag during a fuel stop. Apologies in advance for the food photo. Yummmy! 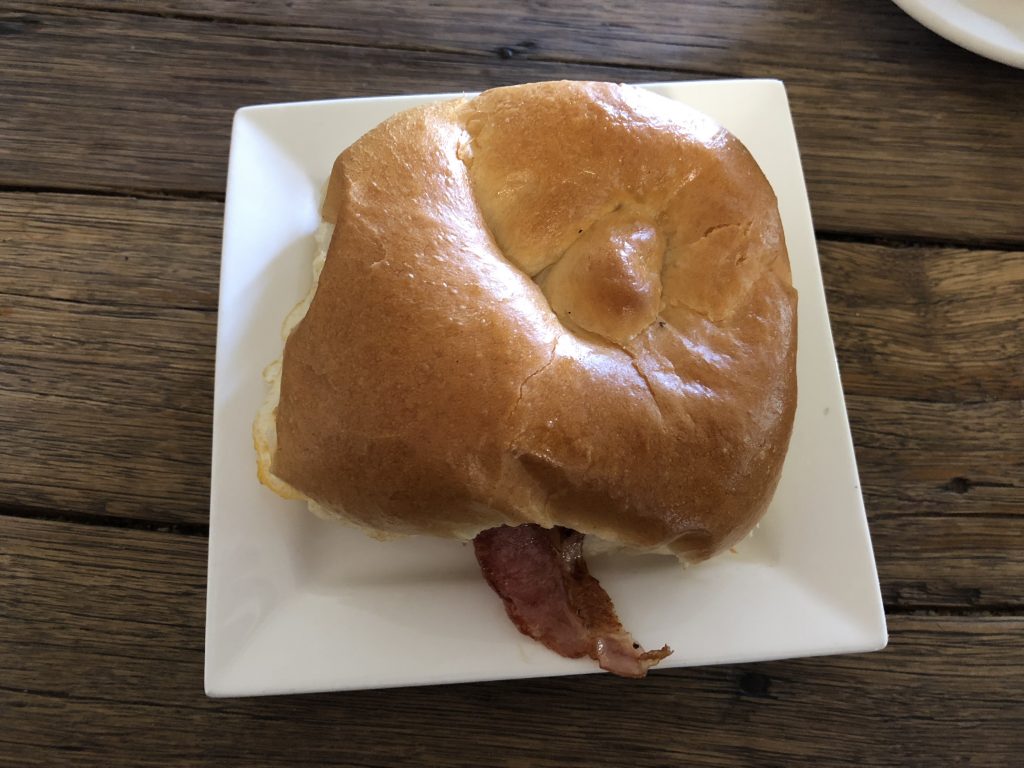 The jerry filled the tank right up which was good news. That meant I should make it all the way back to Nyngan before I’d need to fill up (582kms all up). This meant one stop and 8 minutes minimum saved at Cobar from the original plan. 56 minutes of total stopped time so far for the ride as I fired Little Mango to start the return trip. I must have been distracted to stay that long.

On the way back I got lucky at the roadworks an nabbed a green light. With a lighter fuel load and the wind dropping a little I slipped through Cobar and arrived at Nyngan (1128kms) with an OA of 86.5kph, moving average (MA) 93.3kph. I needed to add more tape to the mirror and lined up to pay for the fuel as I stuffed down a muesli bar and drank from my camelback. One more jerry stop to go.

A headwind slowed me down back on the long straight to Nevertire, fortunately it got behind me a bit on the next section towards Gilgandra which was uneventful except for a mob of 10 roos that had me hitting the anchors as they bounded across the road in front of me. Thankfully the last two of them decided to turn and crash into the fence they’d just jumped over instead of following the others across my path.

The sun was still up, so I decided to ride until it was almost down or I ran out of fuel, whichever came first. The weather closed in and the wind whipped up after leaving Gilgandra heading towards Mendooran and Dunedoo. Little Mango was struggling to push into it and it was a bit of a wrestle keeping the little bike on the road when the wind blew across it. A few times I got down to 4th gear and less than 70kph heading uphill into the wind.

25km before Merriwa the fuel won the race so I refilled from the jerry, changed to my clear glasses and added some more tape to the mirror to align the LED light that shares it’s bracket to point in a direction that was useful. I took a quick snap of the bike and jumped back on, no more stops until home. 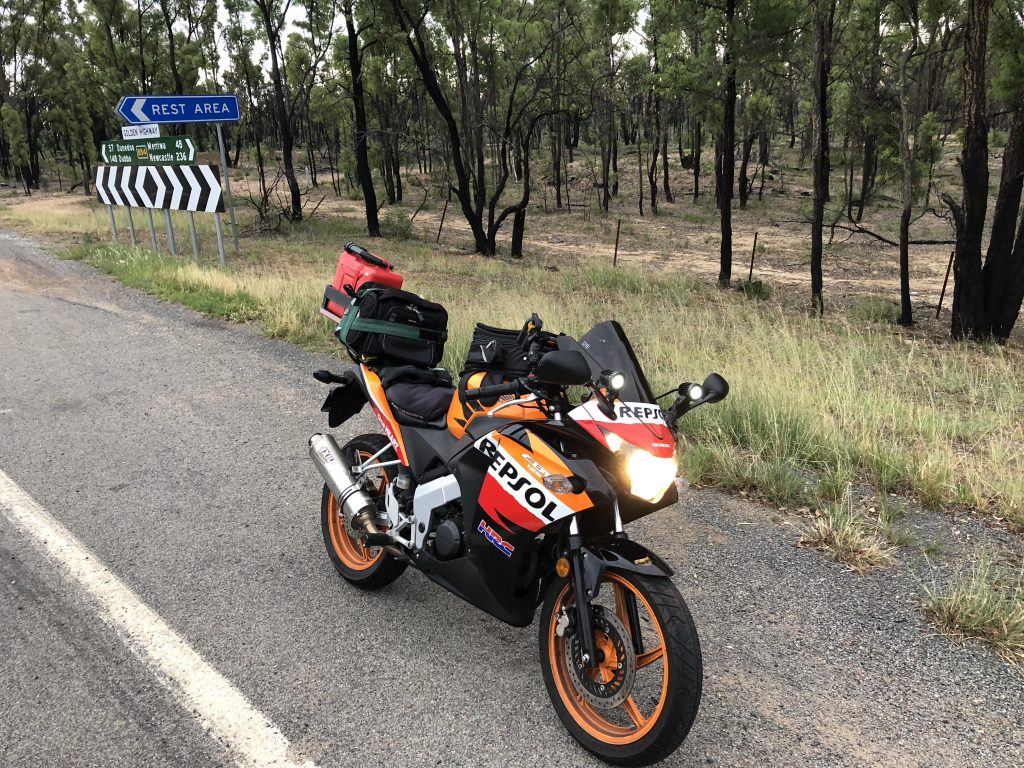 The wind was still blowing hard, 3rd gear was needed twice.  It was tough going for the little bike, all I could do was cram my 195cm (6’5″) frame onto it trying to be as small as possible.

Not far after Merriwa riding a downhill section I was rounding a blind right hander I happened upon two kangaroos on the road crossing from my right. Unfortunately you can’t brake too hard when you are cranked over going flat out downhill. I took some speed off, picked the best of a bad bunch of lines through the flesh and got back on the throttle just before whatever was going to happen happened. I managed to get behind the first roo, the second jumped smack into the side of the bike. I hate that sadly all too familiar dull thud. Maybe it’s the only noise kangaroos can make.

Fortunately, or maybe not, my Daytona boots and right knee took most of the impact. The bike heaved and lurched but upright and on track it stayed.  I knew there was a car not far behind heading downhill around the same blind righty so stopping there definitely wasn’t an option.  Self check, leg painful, toes work, ankle hurts but works, knee buzzing but works, hip works and all the bits of the bike I can usually see were there. The muffler sounds the same, the bag and jerry feel like they are still there. “Just keep going Wom, it’s all over for now.”

Denman and Jerry’s Plains were still quiet.  I was on high alert and understandably not looking forward to riding back through Kangaroo Alley. This time I was the only vehicle on the road and I took it easy. I saw a few ‘roos grazing by the side of the road and only one big grey jumped out before it turned and went bush. Awesome, just how it should be!

The wind had settled down a bit by the time I got on to the Hunter Expressway and it was an uneventful cruise to the local servo for the finish docket and, of course, a Cherry Ripe. 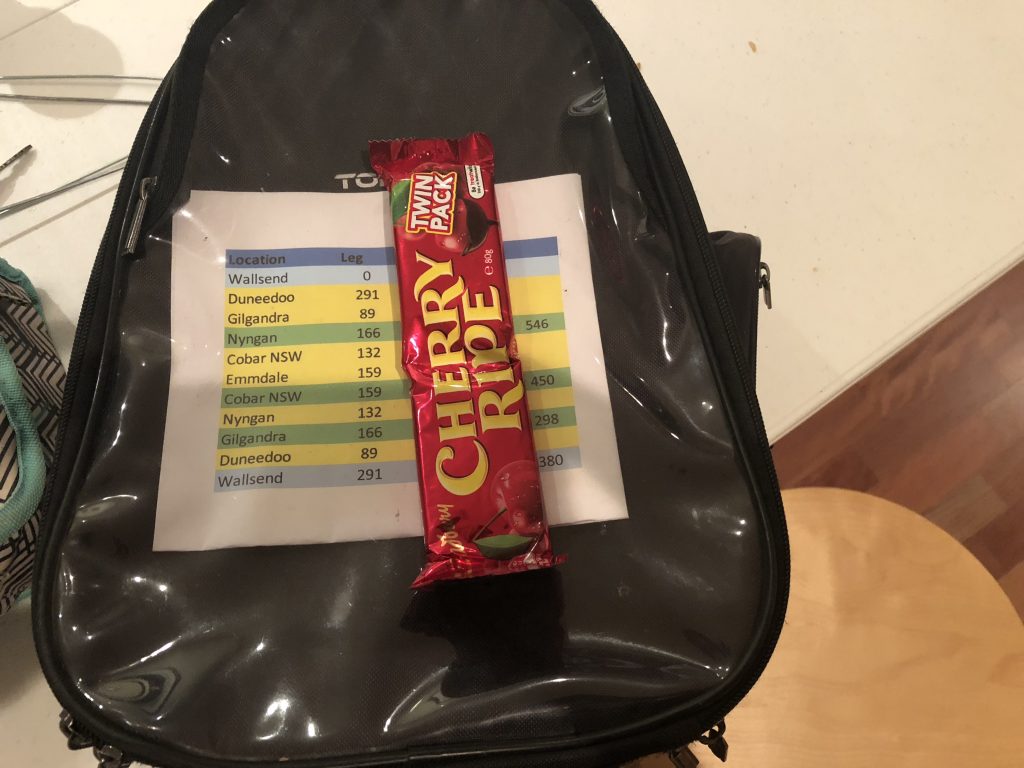 I haven’t done an IBA ride on Little Mango since I rode it from Melbourne to Darwin in 49 hours. I’d forgotten how painfully confined and mentally draining it can be.  I can’t really say why I enjoy riding it this way, maybe we both deserve it.